Zen in Bhutan: An Invitation to a Small Adventure

Zen in Bhutan: An Invitation to a Small Adventure November 23, 2018 James Ford 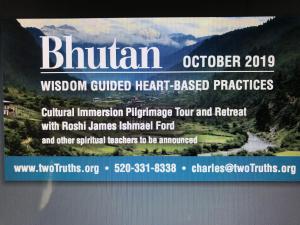 I’ve been invited by the good folk at Two Truths to provide a series of talks and conversations on Zen meditation with an emphasis on koan introspection, as well as guiding experiences of actual Zen practices as part of a larger experience of Buddhist Asia. Along with an investigation of Zen’s teachings and spiritual practices, we’ll also explore the culture and spirituality of Bhutan.

Me, I’ve never been to Bhutan, and am very excited. At the Two Truths website we’re told:

“Situated in the Himalayas, in between Tibet and India, is the last intact Buddhist Kingdom: Bhutan.

“Guru Rinpoche, the emanation of the Buddha, flew on the back of a Tigress in the 8th Century to bring Tantric Buddhism to this remote kingdom, the size of Switzerland.

“Today 750,000 Bhutanese live in this pristine jewel-box of old growth forests that cover 85% of the kingdom, a primarily agricultural, rural society, where yaks and cattle occupy the one-lane “national highway.” It is here that the enlightened 4th King committed his people to “gross national happiness” and sustainability, instead of gross national product, and mindless consumerism.

“When Bhutan is making business decisions, the world’s youngest democracy consciously considers each project’s potential impact on the environment and its bio-diversity. Business proposals are screened for their value of enhancing or detracting from the well-being of their people. The Bhutanese government has a keen recognition of the interdependence of people and natural systems. They have first-hand experience of the impact from glacial melting devastating whole villages with torrential flooding.

“Bhutan has killed a gold mining operation. Killed it, for the same reason that tourists and mountaineers are not permitted to climb its lofty, sublime peaks, among the highest in the world. In a word: respect for the environment and a clear-eyed recognition of the interdependence of all things. It is a playbook for the planet.

“At a time when the World Wildlife Fund’s (WWF) 40 year study of 3,000 animal species, recently found a shocking 52% decline in animal populations, Bhutan is a shining example of respect for bio-diversity.

“There are many lessons to be gained from this tiny Kingdom. The profound respect for the interdependence of all things and beings resides deep in the Bhutanese culture.”

I know in addition to being able to share my love of and experiences with Zen, I expect to learn a lot on this adventure of a lifetime.

Here’s a slideshow about Bhutan I found on the inter webs.

And, Anthony Bourdain’s visit from the last season of his show before his death…

November 22, 2018
Our Broken Song: A Thanksgiving Meditation on the Koan of our Lives
Next Post