A Small Zen Meditation on the Festival of the Epiphany 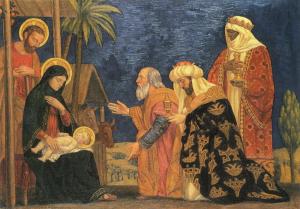 In the Christian calendar, at least some forms of it, today is the Feast of the Epiphany, or Three King’s Day.

Some years ago my spouse Jan and I were talking about that hymn associated with the feast of the epiphany, “We Three Kings,” when she shivered and shared her recollection of that year when she was about eleven and the costumes her mother dressed her, her sister and her brother in and the rickety church stage where they stood and held forth with a family rendition of the song, each kid taking a solo part.

It didn’t go well. She and her brother looked at their shoes and mumbled the words. Jan recalls choking out her part, “Sorrowing, sighing, bleeding, dying./Sealed in the stone-cold tomb,” wondering how she got saddled with those lines. On the other hand, her sister, maybe four at the time, discovered she liked the lights, stepping forward and belting her part to the rafters.

I asked Jan if she hated the carol to this day, and she said, nope. And then added, actually, it’s really kind of wonderful. And, I agree. The carol “We Three Kings” written in the middle of the nineteenth century by the Episcopal priest John Henry Hopkins, captured my imagination from pretty early on, and has stayed with me I think particularly because of those gifts, gold as the preciousness of life, frankincense as the prayers of the longing heart, and even in my youth, tellingly, compellingly myrrh for anointing the dead.

What are the real gifts of the spiritual life? This is an important question for those of us who’ve devoted our lives to spiritual quests. Well, I believe, here we are given a hint at what the real treasures are which we find at the heart of our searching. The carol itself has many versions, as, of course does the story itself.

The oldest version of the story of the magi, the three wise men visiting the newborn Jesus, is found in the gospel according to Matthew. It is probably worth noting that it doesn’t appear anywhere else in the Bible and what’s there is pretty sketchy. Much of what we know as the story is fill in from ensuing years. For instance, perhaps drawing upon the three gifts, which are there from the beginning, in the West three magi are named and given backstories. Matthew actually doesn’t even give us a number, much less names. In the Eastern churches there are in fact twelve magi. I prefer keeping it simple and focused, those three, and their haunting gifts.

Etymologically “magi” is a term associated first with Zoroastrianism and later with astrology, as most raised in the West surrounded by the warm, sometimes warm embrace of the Christian church might recall there’s a star in the story. But the part that caught my imagination is how there was some wisdom not necessarily connected to the Jewish or Christian traditions. Even before those doubts about how true the Christian story really was began to creep into my adolescent heart, I noticed this point implicit in the story; wisdom has never been constrained by a single spiritual tradition.

Wisdom. There is a wild and untamable spiritual insight, which erupts from our human hearts. It is called wisdom, often with a capital “W.” It’s found within the tradition, it appears pretty much in all traditions, but is not bound by it, not bound by any specific religion. In the Hebrew scriptures books like Proverbs, Ecclesiastes, and for me most significantly Job belong to the wisdom tradition. Some argue the first psalm and in the New Testament the Christian letter attributed to James, Jesus’ brother also belong to wisdom.

A wisdom literature is common to the entire Near East. There are Egyptian versions, Persian versions. Some note that Job, or at least a hypothetical earliest version was adopted into the Hebrew scriptures from elsewhere in the Middle East or Egypt.

So, what is this wild and untamable wisdom? The wisdom perspective, at least as I’ve understood it has been that God, or the source, or the Deep, or the One, or, even the unnamable, or the Empty, choose your term for that which binds us all together; is not something beyond us, but something found in our everyday lives, both within and among us. Our lives are the wild. Our connections are the untamable. And here’s the irony. This wild and untamable is in fact only found within relationship. It might be dangerous, but it is intimate. And, therefore, wisdom is always practical, grounded, inevitably oriented back to our lived lives. This, I believe, is the great intuition, the mother of all useful spiritualities.

I can’t think of this, all of it, without actually thinking of the annual pickup Christmas pageant that we used first when I served at the First Unitarian Society in Newton, Massachusetts, then throughout my tenure at the First Unitarian Church of Providence in Rhode Island. One of the quirks of the Providence church was that it has a system of three presidents, a president-elect, a president, and a past-president, who, while led by the president, formed a triumvirate with a division of tasks. When I first saw it I thought it too cumbersome, and it certainly could be, but through luck and a bit of inspiration on the part of a sequence of nominating committees it worked through out my time with them.

And one year when all three of the presidents were singers we decided to have them be the three kings during the pageant. The fact that the church in Providence has three aisles made it particularly workable. As they processed supported by the amazing music that one always gets at that particular church, the whole of that carol was presented. Joy, promise, suffering, and death. And, cutting through all of it, hope.

The critical point of our healing from the wound of separation turns on our understanding how we’re connected. Let’s step away from the image of wave and ocean. Wise not to be caught by one image, by one metaphor, by one analogy. Here’s another for the most important thing we can discover about ourselves. We are, each of us, the meeting of many strands in a vast web of relationship. Our finding this as our deepest truth and living from that knowing of our larger intimacy: that is wisdom.

All this echoing those gifts, I suggests, gold as the preciousness of life, frankincense as the prayers of the longing heart, and tellingly, compellingly myrrh for anointing the dead. Our living with these treasures is the way of the wise heart. As the Proverbs sing to us, “The wise in heart shall be called prudent: and the sweetness of their lips increasing our learning.”

In my Zen circles we often warn against a too tight holding onto hope. It can be a serious spiritual mistake, a dualistic pushing of one’s life into some future. But, as happened in the moment of this song, where all of the mess of life is brought together, then, the locus of hope moved from some distant by and bye into the present moment, into the possibilities of a child born among the poorest.

I was caught then.

And, today, as this feast rolls around one more time, I find myself thinking of it, again…

May the wise find their way to the manger.

May hope birth into this poor, broken world.

January 6, 2019
One Hundred & Four Years of Alan Watts
Next Post

January 8, 2019 Thinking of Saint Death, Her Cult, and the Mysteries of the Human Heart
Recent Comments
0 | Leave a Comment
Browse Our Archives
Follow Us!