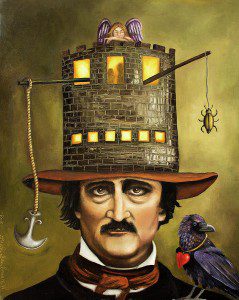 One of the small pleasures of our fourteen years in old New England was finding how my life rubbed elbows with various public figures of present and past. When we were in Providence, especially, it was not possible to avoid crossing paths with the mayor and the governor, the two senators, and the two House representatives. Several even came to recognize me and two probably could recall my name without an aide’s prompt.

But its the dead ones that I mostly recall. Again, Providence meant interesting path crossings with that master of the macabre H.P. Lovecraft. Also, there’s a passing connection to that earlier master of the macabre, Edgar Allan Poe, who was born on this day, the 19th of January, up in Boston, back in 1809

Among the East Coast cities where he spent time was Providence. On occasion as I walked around the church I served in those days, itself standing in the most historic area of the city, I would see among the walking tours with small bands of tourists gawking at the lovely this and thats in the neighborhood, is a Poe tour.

Providence’s little claim to Poe fame is that his work brought him here on occasion, and somewhere along the line he met the Transcendentalist and Unitarian Sarah Helen Whitman. And for a time courted her.

And, because of Ms Whitman, and that they were in the very neighborhood the church stood, actually something of a dominant feature of the landscape, while I wasn’t able to find her name in the membership book, I find it at least plausible that Mr Poe sat in the pews of our old Meeting House.

In honor of that maybe, possible, fleeting connection, how about hearing the Raven recited by Vincent Price?

And, think of this as just a little extra pleasure, how about William S Burroughs reading Annabelle Lee?

January 24, 2019 Sixteen Bodhisattvas: The Smallest of Meditations on a Koan, and the Possibilities of Our Lives
Recent Comments
0 | Leave a Comment
"Ive seen far too much of what Christianity has done and will continue to do, ..."
Brianna LaPoint Help Wanted: We’re Creating a progressive ..."
"this blog is supposed to be about Buddhism. See? this is why i dont like ..."
Brianna LaPoint Pilgrimages: A Mind Bubble on Spiritual ..."
"Ha ha, thank you, James!Yes, I think a good first book's main point may be ..."
Tim Macejak SINGLE BOOK ZEN: Zen Teachers Recommend ..."
"I agree with both you, Gary, and Tim, that Zen Flesh, Zen Bones is a ..."
jamesiford SINGLE BOOK ZEN: Zen Teachers Recommend ..."
Browse Our Archives
get the latest from
Monkey Mind
Sign up for our newsletter
POPULAR AT PATHEOS Buddhist
1