On the Utter, Complete, Total Ordinariness of Mu: A Meditation on One of Zen’s Most Famous Koans 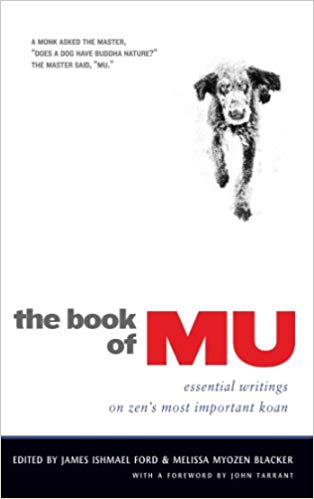 On the Utter, Complete, Total Ordinariness of Mu

A monk asked Chao-chou, “Has the dog Buddha nature or not?” Chao-chou said, “Mu.”

For the practice of Zen it is imperative that you pass through the barrier set up by the Ancestral Teachers.

What is the barrier of the ancestral Teachers? It is just this one word “Mu” — the one barrier of our faith. We call it the Gateless Barrier of the Zen tradition. When you pass through this barrier, you will not only interview Chao-chou intimately, you will walk hand in hand with all the Ancestral Teachers in the successive generations of our lineage — the hair of your eyebrows entangled with theirs, seeing with the same eyes, hearing with the same ears. Won’t that be fulfilling? Is there anyone who would not want to pass this barrier?

So, then, make your whole body a mass of doubt, and with your three hundred and sixty bones and joints and your eighty-four thousand hair follicles concentrate on this one word “Mu.” Day and night, keep digging into it. Don’t consider it to be nothingness. Don’t think in terms of “has” and “has not.” It is like swallowing a red-hot iron ball. You try to vomit it out, but you can’t.

Gradually you purify yourself, eliminating mistaken knowledge and attitudes you have held from the past. Inside and outside become one. You’re like a mute person who has had a dream–you know it for yourself alone.

Suddenly Mu breaks open. The heavens are astonished, the earth is shaken. It is as though you have snatched the great sword of General Kuan. When you meet the Buddha, you kill the Buddha. When you meet Bodhidharma, you kill Bodhidharma. At the very cliff edge of birth-and-death, you find the Great Freedom. In the Six Worlds and the Four Modes of Birth, you enjoy a samadhi of frolic and play.

How, then, should you work with it? Exhaust all you life energy on this one word “Mu.” If you do not falter, then it’s done! A single spark lights your Dharma candle.

Dog, buddha nature–
the full presentation of the whole;
with a a bit of “has” or “has not”
body is lost, life is lost.

(Translated by Robert Aitken in The Gateless Barrier)

I love Wumen’s little sermon on Mu. He evokes a lively practice and calls us to how important it is for us to find our own way into the great matter. It really is about life and death. And, not some abstract life and death. But our lives, our deaths; yours and mine. The old master gets it right down to his bones and marrow and he conveys it eloquently.

However his very enthusiasm and passion can itself become a snare. For instance there is no doubt many encounter the koan as a red-hot iron ball. Particularly within the context of retreat where there are few other distractions the question, the word, the noise Mu can become the holder for all the burning questions of life, rendered into this one thing. Mu. And hot is how it is encountered.

And, for many, particularly many I’ve spoken with over the years, that red-hot iron ball isn’t at all how it’s encountered. Mu can be confusion itself. Neither burning hot nor freezing cold, just confusion. Mu can be a nagging something in the back of your head. Mu can be a small pebble in one’s shoe. Mu can become the longing inhabiting one’s dreams, emerging in so many unlikely ways. And Mu can be encountered like a blueberry found on a bush. You just reach out, pick it, and throw it into your mouth.

It can be any of these things. And more.

I have one friend who many years before she took up the Zen way, was canoeing alone in Maine’s far northern wilderness. Let’s call her Rebecca. Out there in the wilderness in a moment as her paddle dipped into the water she was caught, first by the sound a small splash, then by the feel of resistance as the paddle slipped deeper into the water, then by the smells of water and air and canoe all so clean they had little connection to the experiences of her life back in Boston. Rebecca was startled into silence. In that silence all that was left was the flow of life itself, a flock of geese, the clouds overhead, the splash of some fish, and that crisp smell.

The moment passed quickly enough, but some part of her never forgot. It seemed as if it were some small secret she and the universe shared. Time passed and things happened. There was a divorce. There were changes in work. Rebecca felt dissatisfaction with her life and who she had become, and wanted to find her way again. She thought what she needed was a spiritual discipline, and for whatever reason came to sit in the Zen style and ended up in one of our sanghas.

Early on she came in for an interview. We talked about life and practice and her hopes and we agreed settling down and just noticing might be good for her. Rebecca took up the practice of breath counting. After she had been sitting a while counting her breath, I don’t recall, maybe seven or eight months, she thought maybe the koan way might be a right next step for her. And so, as is our usual practice here, she was presented with Mu. She made her bows and left.

Some months later Rebecca came to sesshin. A day or so into it she came into dokusan and said to me, “You know, James. I’m not sure why, but Mu for me is that moment of silence I experienced all those years ago, but made fresh. Instead of honking geese and the smell of forest air, it’s the roar of that car which just drove down the road and that funny off-white color of the wall.”

And she said one other thing. All this caught my attention. We pursued the matter further. I asked her one of the usual checking questions. And she knew the answer. I asked another, and another, and she kept meeting them fully.

Here’s the point. Rebecca never had the red-hot iron ball experience. Didn’t need it. For her Mu was found like a flower opening.

And if you think about it, that should be one of the options. What we’re promised by the teachers of our way is that we and all things, we, you and I, and every blessed thing, share the same root. Mu is just a noise. It is a placeholder. But what it holds for us is a way of being in the world, that actually we’re always experiencing. It’s always here. We just don’t notice it.

The catch is that other way of being in the world, of slicing and dicing, of separating and weighing and judging, well, it’s important, it’s useful. In fact seeing into our shared place isn’t particularly useful. It doesn’t pay the bills. It doesn’t get us a girlfriend or a boyfriend. It’s in fact the most counter cultural thing we can be about. And so, even though we are surrounded by it, often, usually, its very existence slips into the back of our human consciousness. And even though it is the background of our lives, we come to forget it.

Rarely completely, it is after all, also our common heritage, our birthright as we enter into this universe. So, it peeks out at us in our dreams. It whispers to us in the dark. It beckons in the playing of children and the touch of a kiss. And, it appears even in some very rough patches of our lives, sometimes the roughest. You never know when it will present.

Now I want to be clear here. Each of these phrases I’ve just used are metaphors, are pointers. Don’t look for a thing here. Also, this is important. There is also a pernicious oneness, experienced in many ways, although most often as a projection, and of the various projections, most often, of our egos. Be wary. I’m not describing a thing. I’m pointing.

That said, back to the matter of Mu and its utter uselessness. If you’ve presented yourself to a Zen hall, if you’ve come for an interview with a Zen teacher, you’ve probably decided that the culturally correct thing hasn’t proven to be all that satisfying. There’s been some nagging thing at the back of your heart or your head. Something, perhaps only the smallest thing, hints that the life we’ve led up to this point isn’t enough. Or even that phrase “not enough” doesn’t quite express it; some sense of dis-ease haunts us.

So, perhaps you’re ready to let the call of culture, of gain, of success one way or another, fall down a notch or two. Perhaps you’re ready for something that has no value. And so you take up our disciplines of sitting down, shutting up, and paying attention. Sitting is a good thing. Lots of sitting is a very good thing. And taking up the hard way is sometimes very necessary. Throwing our hearts and bodies into the practice, sometimes, can be the most important thing we can choose to do. There is a place for that red-hot iron ball.

But, actually, here’s the secret. All you need do is step out of your own way. That’s the only problem. We stand in our own way. It’s already here. It’s always here. Perhaps you first noticed it as a child, maybe as an adolescent. It’s taught in Buddhism, and Taoism and Judaism and Islam and in Christianity. It’s found somewhere in all religions. And, it’s found in the hearts of people who claim no religion. It is as close as the throbbing in your jugular vein. It is proclaimed in the next breath you draw. It’s found canoeing in Maine and it’s found changing a diaper.

So, the pointers are everywhere. In that most Zen-like of Western spiritual testaments, the Gospel of Thomas, the sage Jesus declares if you want to see him, cut a board in two, or pick up a stone. Saying you can find it when you cleave a board or pick up a stone, doesn’t mean there’s some magical board out there waiting to be found or one rock is more precious than all others. Rather it is just this piece of wood. It is just this pebble.

It is just this breath.

It is just this Mu.

Uncertainty and Outbreaks
The world has stopped. Well, it hasn’t really. But a whole lot...