Heaven & Hell: A Zen Meditation on the Crucifixion & that Good Thief 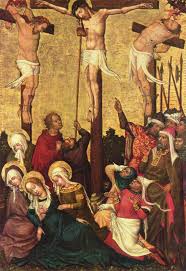 The Western church celebrates today as the feast of St Dismas, the name that has been attached in the story of the two thieves who died with Jesus for the “good” one. In the story as we receive it actually the thief has no name.

We no longer live in a biblically literate culture, so for you who do not know, the short version of the story is that when he was crucified there were thieves on either side of Jesus.

There they are, hanging on their crosses. One mocks Jesus. I get that guy. Totally. And, he is the not good one. In some later stories he’s given the name Gesmas.

However Dismas says something to the effect we deserved our fate. But you, Jesus, didn’t. And then that one, the good thief, the one we call Dismas asks to be remembered “when you come into your kingdom.”

Then there’s some delightful confusion about what Jesus said in reply. Well, delightful for some of us. Me, among them.

The generally accepted understanding is Jesus promises, yes, you will be. To me a totally uninteresting statement in the midst of a terrible scene. Among Christians this is often taken as an invitation into faith even contrary to all evidence at hand. I have little taste for such things. Among the Christian archetypes, it’s Thomas I like the most. Let me touch that wound…

The other version, however, consider it a minority report from the center of the heart, is that Jesus says to that thief you are with me in paradise.

There is a world of difference between will be and are now.

I think a lot about his now.

If there is a paradise I can’t see it any place other than this place. And. If there is a hell, here it is. And. Here in this suffering world is truth and beauty and joy.

As some say, the lotus in the fire.

I like thinking there’s one who found it even on a cross.

Even if “just” a story, it points to something each of us can find.

Makes it, in my book, a true story. Truest of true.

March 25, 2019 ZEN IN THE OC: Announcing our new Zen sangha gathering in Anaheim
Recent Comments
0 | Leave a Comment
Browse Our Archives
get the latest from
Monkey Mind
Sign up for our newsletter
POPULAR AT PATHEOS Buddhist
1