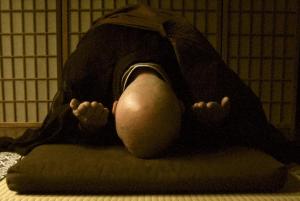 Not long ago in an email exchange with the Rinzai teacher Meido Moore he told me that he was working on a new book focused on some Rinzai disciplines historically only transmitted orally, mostly focused on energy cultivation and “direct pointing practices.”

Perhaps just because that’s the way my brain works, it made me think of that part of the koan collected in the Gateless Gate as case 23, “Think Neither Good Nor Evil.” It features a dialog between the Sixth Ancestor, Huineng and Elder Monk Ming, a former general. After having his heart opened with the question “What is your original face,” the former general asked, “Beside this secret teaching you have revealed, are there any deeper matters?”

Our founding ancestor, both mythically and historically as all Zen lineages trace through him, replied “This teaching is not secret.” In the koan there is much before, and some after, but this is the part that came to mind in that part of my conversation with the roshi.

So, no secret teachings.

Then after saying that, we in the Soto stream of the Zen way just like those in Rinzai have our little secret teachings.

In Japanese Soto when one received Dharma transmission most lineages also provide something called kirigami, which I believe translates as “bits of paper.” They emerge in the Middle Ages and as the scholar Steven Heine tells us “reflect a creative use of traditional koan records integrated with popular religious themes such as devotion to local gods and the exorcism of demonic spirits.”

As a practical matter if a grave catches fire, I’m your guy. Or, should a dragon appear to you, I know what to do about it. The documents (actually in my line through the late priest Houn Jiyu Kennett, they are gathered together into a single hand-copied book) also include brief sermons. One of them is “The Secret Explanation of Bowing.”

“When we become the Buddha or ancestor, we can meet the Buddha or ancestor not only in the three worlds of past, present, and future for we are always going endlessly. We see and worship something that possesses the aspects of the Buddha. We have been contemplating and studying something in bowing to the Buddhas, and we should know that bowing is the shobogenzo. So long as bowing lasts Buddhism will last. If bowing does not last Buddhism will be destroyed, To bow to the master of denbo is to see Shakyamuni Buddha. It means that we offer dharma to Shakyamuni Buddha. We are not saying these things in the sense of the world of forms. Do not argue about these things if it is before or after the time of Eonno Butsu.”

The text would most likely have been translated by Kennett Roshi and Suigan Yogo Roshi. Where it’s origins are, I’m not sure. I’ve found the line “As long as there is true bowing the Buddha way will not deteriorate” attributed to the great Thirteenth century Soto teacher, Eihei Dogen. So, possibly this homily is from somewhere in the Shobogenzo collection. As to how that term is used in the text it literally means “treasury of the true dharma eye,” and I think it can be read to mean that. “Denbo” means dharma transmission. The rest is fairly straightforward.

No secrets. And, the secret. Bowing is the secret of understanding the way of Zen.

For the past year or so I’ve been attending the Wednesday & Friday morning zazen practice led by my friend Gyokei Yokoyma Sensei. For one thing it is nice to sit in a group where one is not in charge. And, I get more than my fill of that with the Anaheim Zen Sangha and the Empty Moon Zen Network. For another I love that early morning schedule. The way the light comes up from the darkness as we begin, the mix of smells, particularly the slight hint of mildew mixed with sandalwood incense that instantly returns me to my youth sitting at the old Berkeley Zendo. It is delicious.

But, the main reason I’m doing this is that I have committed myself to trying to relearn the liturgical forms of Soto Zen. I first learned them pushing on fifty years ago. But after my time in the monastery I ended up practicing with a lay koan teacher and as the years passed, well, that part of my Zen life more or less fell away.

In my dotage this priestly part has become increasingly important to me.

I’ve found this in some ways just relearning to bow. Never a bad thing. Especially for anyone who is walking the Zen way. And, so, most Wednesday & Friday mornings, I at least figuratively put on the black robe of a novice priest and try to learn the liturgical ropes presented by a kind and generous teacher.

I’m beginning to get a handle on it, at least in the most basic sort of ways. But, I recall that day, after observing for quite a while, and being given small tutorials by Gyokei san and his assistant Seigaku san, the sensei asked me to function as doshi, liturgical leader, for the middle service of the three we did.

As anyone who knows about such things know, when asked by the Zen teacher to do something the only appropriate response is yes. So, I watched intently as he led the first round. Then, I threw myself into it. What can I say? At least I didn’t feel like I was losing my breath or going to throw up. My first approach to the altar my hands were held wrong. Throughout the bows were stiff. And, I appear to have thrown in an extra couple of bows in at a wrong spot. And, well…

Of course, anyone who has witnessed our Soto liturgies knows, the whole thing is actually simplicity itself. It’s all about recalling the actually rather few separate movements and executing them with attention. You know the gifts of simplicity.
And. And…

Let’s just say it wasn’t as bad as when that Sufi sheikh tried hard to teach me the rudiments of Arabic. I fear I broke that man’s heart, and probably shook his faith in the divine in the process. Here, I was merely awful. And, I know, it can be worse than awful. So, on balance, I enjoyed bowing into the discipline of offering incense and bowing.

And, as I said, it is coming to rank for me right with sitting in Zen meditation. There is something wondrous here. It can best be understood by thinking about bowing, liturgical, and otherwise. Bowing as that little homily in my secret documents tells us.

Bowing as the way. Bowing is the way.

And. Perhaps this is helpful. Anyone who knows me, knows I’m not super good at bowing.

When I was preparing for the Unitarian Universalist ministry, I was required to take a battery of psychological tests. As I sat with the psychologist, he pointed out how I was a “strong” personality. That is on a printout chart my various personality issues bounced along the top of that chart often touching the magical line that was considered over the psychological top.

Except, however, the test for conformity. I was not to put too fine a point on it, well below the acceptable line for nonconformity. He smiled at me and observed how fortunate I was that I wasn’t aspiring to the Episcopal priesthood, because, if I were, this would be the end of the process. But, he added, for a Unitarian this suggested the strong possibility of a highly successful career.

Did I mention how I’m not super good at bowing? And there is no Zen without bowing. And. If one cannot bow, if one cannot set one’s ego to the side, if only for fractions of seconds, one will continue to stand in the way of their realization. But with bowing…

Therein lies the secret of our way. A secret that is no secret.

With an authentic bow, with our heart letting go, again, just for a fraction of a second, then the universe reveals itself. It’s that simple. And, one more thing, if I can do it, so can you. It’s as easy as falling off a log.

The great secret of our Zen way revealed for the healing of the world.

May 31, 2019 Happy 200th Birthday, Walt Whitman!
Recent Comments
0 | Leave a Comment
"An excellent essay, and a necessary one. I quibble about the UU T-shirt which says, ..."
Ohyetwetrust CHANGE & NOT KNOWING: Darwin, Huxley, ..."
"I appreciate your acknowledgement that since you didn't know the source of most of the ..."
Harold Wood Recalling John Muir, Nature Mystic, and ..."
"I purchased "This is It" back in 1974 simply because of the paperback cover. Now ..."
Ed Alan Watts Turns One Hundred & ..."
"One basic error of every "optimistic" philosophy is thinking that humans are evolving into more ..."
bill wald ALL BEINGS, ONE BODY: A TRUE ..."
Browse Our Archives
Follow Us!