The Sage Wonderful & the Vineyard: A Zen Priest Retells an Ancient Koan 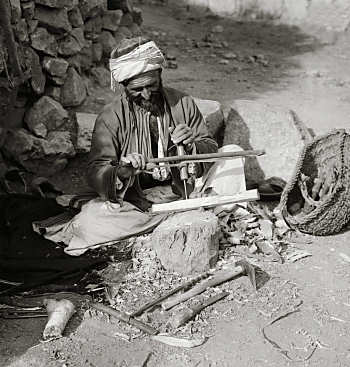 The Sage Wonderful & the Vineyard

Once upon a time long ago and far away there was a carpenter named Wonderful.

He was also a sage who had a following among the poorer members of his community. One day just as he was finishing plaining a plank for a table a large splinter flew up and lodged in the middle of his left palm. He stopped, shocked by the pain, and squeezed his wrist the slow the blood that was already flowing. Using his teeth to grasp the part of the splinter sticking out of his hand, he turned his head and pulled the splinter out. Then he took a cloth and wrapped it around his hand.

His workshop was a lean-to in front of his small house. He looked up and saw the sun was beginning to slide toward the late afternoon. Wonderful felt the moving of a song from deep within and called to a boy playing in the dirt in front of his shop. When the boy looked up at him, Wonderful said to go to the well at the center of town and say that he was going to sing a truth just before evening. And if anyone wanted to hear they should go to the regular place. The boy immediately set off.

Feeling the soreness in his hand, he turned and walked down the one real street of the town, to the end, where there was a good-sized hill. The hill was named for the vultures that nested at its crown. As he made his way up the side of the hill people began to join him. It was hot and dry, and as they walked they kicked up dust.

By the time he came to the place he liked to sing from there were maybe a dozen. Almost all were from the poor, the rich had little interest in his words. Although he saw Wished For. She owned a vineyard, and so although hardly wealthy was more secure in worldly things than most of those who listened to him.

As he prepared himself, Wonderful realized there were now more than the dozen and a few more from the village. And that thing happened again. Others that he could just barely make out had joined the group. Some seemed to represent the ancient ones of that place, but from what age, or even what world precisely, it wasn’t clear. Several in the crowd thought they saw a rustle of wings out of the corners of their eyes, but when they turned they saw no one. Wonderful noticed others as well that no one else saw. Or, only saw as mist. They hung to the farthest back, clothed in rags, faces gaunt with losses too numerous to name. And. All of them, humans and otherwise, waited for the turning word.

Wonderful allowed a time of silence. Then, when it seemed time, he took a small sip of water from a jug that had been handed to him, washed away the taste of dust, handed the jug back with a thank you, began to sing out.

“I come to tell you the great truth of that place most dream of as beyond labor and sorrow.” He looked around and pointed at Wished For. “Once there a person who owned a vineyard needed some workers.” The small crowd chuckled. The barely visible ones leaned in, waiting. Some worked their mouths as if trying to say something. But the only sound was the rising of a breeze, coming as welcome relief to everyone present.

“She went to the market and saw people standing about, doing nothing. She told them, come and work in my vineyard for the day. I will pay you three copper pieces. And so, they followed her to the vineyard, collected the tools she had placed out and began to work.”

Most in the crowd did day labor for their livings, they could imagine how long and hard that could be. Some thought three copper pieces, she could have offered a little more. Others wondered, what does this have to do with the place beyond labor and sorrow.

Wonderful continued, “About midmorning, she saw there was a need for more workers. So, she returned to the market and found some more people standing around. She told them, come and work in my vineyard for the rest of the day. I will pay you a fair wage. And, they too, followed her to the vineyard and began to work.

“Then, at about three in the afternoon, seeing there was more to do, she went back to the market and did the same. Then, at five o’clock she again went out and found people in the market. She asked, why are you here? They told her they had come looking for work, but no one had hired them. She said, come and work in my vineyard.”

Those present nodded. They knew this story from their own experience. But then Wonderful continued. “When it came time to pay the laborers, each received three copper pieces.” Some in the group began to mutter. One said, “Wait, Honored one, this isn’t fair.” Some of the ragged ones at the edge seemed to begin a wail, although no words actually came from the darknesses that were their mouths.

“Fair?” asked Wonderful. He felt a small tinge of pain in his hand and adjusted the bandage. “What did I say I would sing to you about?”

Everyone fell silent. He looked into everyone’s face. Only Wished For met his eyes.

She smiled, the smallest of smiles.

July 2, 2019 Not Knowing: A Pointer on the Intimate Way
Recent Comments
0 | Leave a Comment
"This reminds me of the story about a priest holding a candle doing a one ..."
Catherine A Meditation on What My Grandmother ..."
"Fun talk. Here's my translation of the case:Raised: Guishan asked Yangshan, “Suddenly there is a ..."
Gregory Wonderwheel Book of Equanimity Case 37
"There is a novel based on the philosophy of the Ten Ox Herding Pictures called, ..."
Jay A PILGRIM’S PROGRESS:  Zen, Maps of ..."
"That's a nice cartoon. It always fun to go back in time and see how ..."
David Brevik Fiddlesticks: Recalling the First Colored Sound ..."
Browse Our Archives
get the latest from
Monkey Mind
Sign up for our newsletter
POPULAR AT PATHEOS Buddhist
1