The Jesuit & the Zen Master: Recalling a Sixteenth Century Encounter 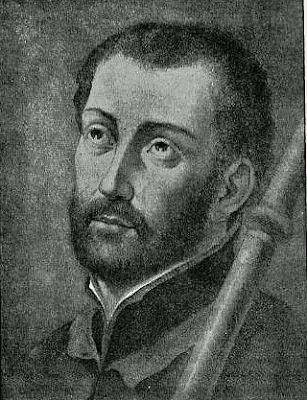 Today, the 3rd of December is the feast of Francis Xavier, the Jesuit missionary to Japan.

While fervently hostile to nonChristian religions, and with some blood, if indirectly, on his hands in that regard, I believe he is also the first Westerner to write a moderately accurate report of Zen in a European language.

Born in the Kingdom of Navarre (modern Spain) in 1506, he was a close associate of Ignatius Loyola. In 1534 the good father was one of the first seven men to undertake vows of the Jesuit order. He spent some years attempting to evangelize India, and also spent time in Japan.

Father Xavier appears to have actually cultivated a genuine friendship with Abbot Ninshitsu of Fukushoji in Kagoshima. They spent many hours together and talked of many things.

Heinrich Dumoulin gives a delightful accounting of Xavier’s inquiry into Zen’s meditation and the abbot’s response, translated and paraphrased, I don’t know how loosely from Xavier’s “famous” “great letter.”

In a stroll through the temple grounds the two friends came across monks seated in meditation. Deeply impressed by the modesty, the concentration, and the repose they displayed, Xavier asked the abbot, “What are these monks doing?” The abbot laughed and said, “Some are calculating the contributions received from their followers during the past months. Others are thinking about how they might get better clothing and personal care. Still others are thinking of vacation and pastimes. In short, no one is thinking of anything important.

I don’t believe the good father quite got the point.

But he did listen…

And in the ensuing years many Jesuits would also find Zen very interesting.

For instance, as one of many possible examples, Robert Kennedy, SJ:

November 27, 2019
Wishing Everyone a Blessed Feast of Saints Barlaam & Josaphat!
Next Post

December 4, 2019 Recalling the Shunryu Suzuki and Zen in America
Recent Comments
0 | Leave a Comment
Browse Our Archives
get the latest from
Monkey Mind
Sign up for our newsletter
POPULAR AT PATHEOS Buddhist
1