Narcissus Drowned: The Zen Priest Takes a Peek Into an Ancient Mirror 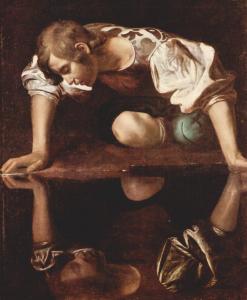 I set my current book project aside for a week. And then today, going back to the introductory section I was letting marinade, I saw how, once again, I was repeating an old habit.

Perhaps all theology is autobiography, but one should be careful about over indulgence.

And so I cut it from the manuscript.

Now, not wanting to be wasteful, and okay, also I rather liked it, so I share it here.

We all begin somewhere within the great play of karma.

I was born at the dawn of Aquarius.

Then television came. And then birth control.

In my own life I gradually noticed my family was poor. My father had a serious drinking problem and a weakness for the main chance. He spent time in prison. I learned about prison when he spent a year in a California jail during my early adolescence. I don’t remember being hungry, I do remember lots of boxed macaroni and cheese, and hot dogs a treat. One Christmas happened because of our local firemen. I found sex. And I learned shame.

I grew and the world and the great mix of sorrow and joy tailored to the moment began to reveal itself. It all was so ugly. And. It all was so beautiful.

For many of us in my generation the wrongs of the age felt spiritual. I felt my childhood Christianity, a poor people’s fundamentalism, didn’t work. I prayed for God to reveal himself. I offered my life in exchange.

I was met with silence.

And I began a spiritual quest

The opening sentence is a lift from a Zen koan. One of those questions with a built in pointer to the secret places of our hearts.

The rest my wrestling with how much my identity is also the story of a moment in history. Auto biography and theology. And how the auto in that biography is part of something larger than that which ends with my skin.

Important stuff. We all need to look at ourselves. The “me” of things, the “I” of things is how the world has tailor made a moment for itself to be known.

And the project is a dangerous one. Gazing in a mirror can, and almost always is at least partially self-indulgence. And don’t forget, for Narcissus that gaze proved fatal.

I find myself called into Dongshan Liangie’s poems usually called the Five Ranks. In this moment the second of them.

An old woman has overslept
She gazes into an ancient mirror;
She sees her face – there is nothing else
At the same time confusion.
Which is reflection? Which is the original face?

The Pacific Zen Institute reframes it slightly and offers it a bit more clearly as an invitation.

You find yourself to be an old woman
You’re sleeping late.
When you wake up you come upon an ancient mirror
And you see your own face clearly.
Try not to lose sight of it again and go chasing shadows.

That old woman. You. Me.

And then there’s the mirror. It’s as ancient as the creation of the worlds.

It is the way. Turning the light within. Facing the wall.

If we use it correctly, we’re on our way into the mystery. It is the mystery. But, if we’re not careful, all we see are dancing shadows.

And it becomes isolation.

The dancing shadows are seductive. But. Narcissus drowned.

And a bit of advice from an old hand.

December 10, 2020
The Zen Priest Reflects on a Jewish Story on the Eve of Hanukkah
Next Post

December 13, 2020 The Rites of Religion: A Small Meditation Following the Ordination of the Reverend Lisa Garcia-Sampson to the Unitarian Universalist Ministry
Recent Comments
0 | Leave a Comment
"A wonderful tribute indeed, but you fail to speak about his great lit-crit and also ..."
Tom Hanson T. S. Eliot & His Secret ..."
"Thank you for this wonderful tribute to Eliot. "The Wasteland and Other Poems" was one ..."
Steve Bailey T. S. Eliot & His Secret ..."
"Father Merton wrote "Nhat Hanh Is My Brother" in 1966."He is more my brother than ..."
Robert Flannery The Zen priest Wishes Thomas Merton ..."
"this geelong seafood blog is great. geelong seafood"
John N LIVING IN THIS FLOATING WORLD: A ..."
Browse Our Archives
get the latest from
Monkey Mind
Sign up for our newsletter
POPULAR AT PATHEOS Buddhist
1