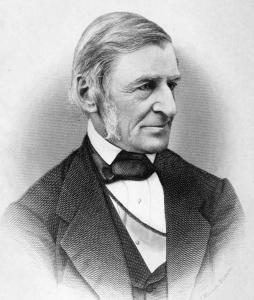 It was today, the 15th of July, in 1838 that Ralph Waldo Emerson delivered his famous Divinity School Address.

It was immediately denounced as some “new infidelity.”

A full generation earlier New England’s Unitarians had rejected the trinity and instead focused salvation on “character,” putting the locus of salvation on the actions of the individual in her or his life rather than through a vicarious atonement achieved by Jesus’ death.

Nonetheless this first generation of Unitarians were deeply rooted in biblical Christianity. Their rejection of trinity was mainly because there was, beyond a Medieval interpolation, no explicit statement of a trinitarian doctrine in the scriptures. In fact they continued to assert the proof of the Bible were the miracles reported within the text.

Emerson’s Divinity School Address delivered before the graduating class of the school dismissed the idea that the reports of miracles in the scriptures were proof of the truth of the teachings to be found within them, and with that explicitly rejecting the necessity of scripture as divine revelation.

Instead he declared that the intuition of the individual was sufficient to find one’s way. This created a firestorm within Unitarianism. A fire that has not yet burned itself out.

There would be a variety of views held among the Transcendentalists. And, personally I’m much more influenced by Henry Thoreau’s “thing in itself” than Emerson’s platonism. But, one thing was certain. In this crowd of New England Unitarians, something incredibly important was happening. And Mr Emerson was at the center of it all.

And this address was a major marker of something that would profoundly influence, for good and for ill. Me, I’m going to happily assert vastly more to the good.

An amazing moment within the rising spiritualies that mark the modern West.

July 16, 2021 Be A Student: Some Aspects of Beginning a Zen Practice
Recent Comments
0 | Leave a Comment
Browse Our Archives
get the latest updates from
Monkey Mind
and the Patheos
Buddhist
Channel
POPULAR AT PATHEOS Buddhist
1