Vow and Grasping in the Zen Life: A Very Small Meditation 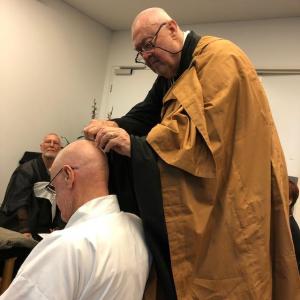 Another image comes to mind. I was talking with a clerk in a large Department store. It turned out he had been a Catholic monk for more than twenty years. He left because his mother was sick and had few resources and if he didn’t take care of her, she probably would have been on the streets. What I found particularly compelling in our brief conversation, while the pain of leaving the monastery was clearly on his heart, he also was obvious he’d made a right decision. And, most important, he seemed to feel he was still fully engaged in the great matter.

My friend the Zen teacher Grace Schireson talks about once being confronted for being married and a Zen priest. When asked how she squared that circle she replied, “I keep all my vows.” If a koan is an assertion about the intimate way and an invitation to stand in that place, I keep all my vows is definitely a koan.

In traditional Buddhism entering the way means “leaving home.” In fact, the original Buddhist community was a company of monks. Later a company of monks and nuns. If you couldn’t or wouldn’t take monastic vows the best you really could do was support those who did and hope for a more propitious birth next time around.

I’ve also known more than one bitter monk. People who after years of crushing their lives, at least as I see it, who find solace in belittling “worldlings,” those who didn’t throw it all away. Like the famous story of the two Zen monks on pilgrimage, where they meet a young woman at a ford in a river, and one carries her across and then sets her down safe on the farther shore, how as they continued on their way, the other monk just could not set her down, in the recesses of his heart, could not set her down and continue.

Sadly, I’ve met a few more of the complaining monks than the ones who won the greater victory. And it begs a great question. What is grasping? In the fundamental matter of the heart, what is clinging really? And with that, how do we meet it?

September 7, 2021 The Secret Teachings of Zen Buddhism
Recent Comments
0 | Leave a Comment
Browse Our Archives
get the latest updates from
Monkey Mind
and the Patheos
Buddhist
Channel
POPULAR AT PATHEOS Buddhist
1