A Feast for Francis: The Zen Priest Reflects on a Medieval Christian Saint

A Feast for Francis: The Zen Priest Reflects on a Medieval Christian Saint October 4, 2021 James Ford

Most high, all powerful, all good Lord! All praise is yours, all glory, all honor, and all blessing. To you, alone, Most High, do they belong. No mortal lips are worthy to pronounce your name.

Be praised, my Lord, through all your creatures, especially through my lord Brother Sun, who brings the day; and you give light through him. And he is beautiful and radiant in all his splendor! Of you, Most High, he bears the likeness.

Be praised, my Lord, through Sister Moon and the stars; in the heavens you have made them, precious and beautiful.

Be praised, my Lord, through Brothers Wind and Air, and clouds and storms, and all the weather, through which you give your creatures sustenance.

Be praised, My Lord, through Sister Water; she is very useful, and humble, and precious, and pure.

Be praised, my Lord, through Brother Fire, through whom you brighten the night. He is beautiful and cheerful, and powerful and strong.

Be praised, my Lord, through our sister Mother Earth, who feeds us and rules us, and produces various fruits with colored flowers and herbs.

Be praised, my Lord, through our Sister Bodily Death, from whose embrace no living person can escape. Woe to those who die in mortal sin! Happy those she finds doing your most holy will. The second death can do no harm to them.

Praise and bless my Lord, and give thanks, and serve him with great humility.

Today, the 4th of October, is the feast of St Francis.

Which makes this the 795th anniversary of the Italian friar’s death. Just five years off 800…

He was mad. Mad for God. Mad in other ways, as well. And, he was among the most compelling of the generations that have claimed Jesus as their Lord.

I say words about him frequently.

Many years ago I ran across a book describing a visit to Japan sometime before the second world war. I don’t recall a lot about it. Except, that is, for one thing. The writer described encountering a small Buddhist society whose members were following an adaptation of the rule of St Francis.

I’ve long since lost the book and have never been able to find anything else about this little band, almost certainly consumed in the fires of that second great war.

But who they might have been, their purpose in gathering, and the work they may have taken on, all haunt me to this day.

Today I find myself thinking about him. And, I think of those Buddhists who followed his rule.

Francis has been called the only Christian. Could even be true. Certainly he is one of the most compelling figures in world spiritual history. Small wonder a pope would take his name as an aspiration for his reign. Servant of the servants of God.

As I said, Francis was probably more than a little crazy. And, he had courage most of us can barely conceive of. And grace. And a beauty of possibility. The Sufis speak of madzubs, people crazed with God. For me that term describes the mystery and miracle that was Francis.

Rummaging around the web I found an article by a friar, Stephen Lynch, who wrote “A famous Buddhist monk, Professor Yokoi, rector of the Buddhist Zen Institute of Komazawa University in Tokyo, felt St. Francis of Assisi exemplified the three fundamental ideals of Buddhism. He felt that St. Francis was a man without covetousness, without anger, and without delusion.”

In Buddhist pop psychology we humans find we are woven out of the demons of covetousness, clinging anger, and delusive certainties. The catch, which I guess makes its more than “pop,” is we do not transmogrify into different creatures. Rather we open other faces of those entities, generosity, clarity, and curiosity.

To be human is to be aspirational. As we Zen practitioners in the west are fond of saying in paraphrase of our Thirteenth century master, Eihei Dogen, “one continuous mistake.”

To be human is aspirational.

It is a turning into the world, into our own hearts and minds, into the mess that is community, that is to be a part of this world.

And in this work of turning into the world as the heart of our spiritual practice, I find Francis enormously helpful. Kind of crazy. Totally committed.

And, someone who found something, which he shared with the world.

October 3, 2021
The Householder Vimalakirti Opens the Nondual Gate
Next Post

October 5, 2021 A Zen Meditation on the Four Abodes
Recent Comments
0 | Leave a Comment
Browse Our Archives
get the latest updates from
Monkey Mind
and the Patheos
Buddhist
Channel
POPULAR AT PATHEOS Buddhist
1 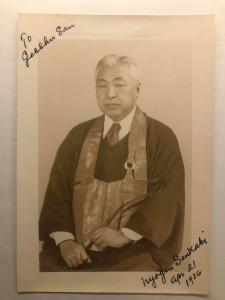