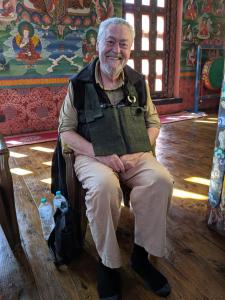 at the First Unitarian Church of Los Angeles

October through June, 2021, we will be exploring the religions and other related topics that have particularly caught our consulting minister Rev. James Ishmael Ford’s imagination over the years.

These conversations are not meant to be comprehensive, but lightly touching some of the world’s great traditions. James will be following two principles in these conversations. He says that all religions are false. But, at the same time he finds deep currents also run through each of them.

Come and explore what some of those currents might be.

Free and open to all who can gather in good will.

James is an ordained Soto Zen priest and a koan teacher in the Harada Yasutani Zen lineage. He is also an ordained Unitarian Universalist minister. James is the author of five books on Buddhism and Zen, including If You’re Lucky Your Heart Will Break: A Field Notes from a Zen Life and an introduction to Zen meditation Introduction to Zen Koans: Learning the Language of Dragons. He has lectured at Meadville Lombard Unitarian Universalist seminary, Harvard Divinity School, and the University of the West. He currently serves as one of First Unitarian’s two consulting ministers.

This will be a hybrid event

We will meet in-person at First Unitarian Church, masked and maintaining social distance.

And  on the church’s Zoom FUN channel

To get an idea of how many people will attend, please sign up.

October 12, 2021 Noting Aleister Crowley's Birthday
Recent Comments
0 | Leave a Comment
"My primary consciousness on Zen is that unlike religion or philosophy which depend on linear ..."
Frank Redden Recalling the Archangel Raphael & Happy ..."
"Foremost I seem to be getting commercials of which I understood were not going to ..."
Frank Redden Recalling the Archangel Raphael & Happy ..."
""Those who can think deeply and reflect carefully, with the imagination to dream and the ..."
Robert Landbeck Prophecies of the End: Dreams of ..."
"I would note that the Josiah Wedgwood in question was the son of the more ..."
Erp Recalling Samuel Taylor Coleridge, Sometime Unitarian, ..."
Browse Our Archives
get the latest updates from
Monkey Mind
and the Patheos
Buddhist
Channel
POPULAR AT PATHEOS Buddhist
1