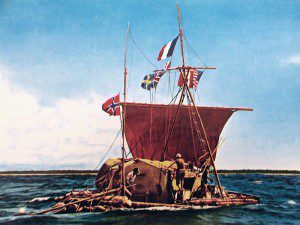 it isn’t going to be easy to convey to a current generation just how much his grand adventure could set young hearts beating in the 1950s.

In 1947 he and his crew aboard the raft Kon Tiki made it to the reefs of Raroia in the Tuamotu Islands, following a one hundred and one day voyage covering some four thousand, plus miles.

He had a reason for this adventure. He wanted to prove that Polynesia was occupied from the Americas. His journey using only the technology that would have been available at the time proved it was technically possible. However, despite his audacious proof it could have been done, his theory was not widely accepted at the time. And, today there is little doubt the migration was from West to East.

However, it’s the audacity of his adventure coupled with very good filming, his striking good looks, and then a best selling book, that left my generation coming of age with a contemporary vision of adventure.

I was born a year following the voyage, and my childhood, which in many was was deeply constrained, was also filled with images from this expedition. Its images infiltrated my dreams.

And led me to consider a larger world…

So, thank you, Thor!

October 5, 2021
A Zen Meditation on the Four Abodes
Next Post