Arcangela Tarabotti: One of those People We Really Should Know About 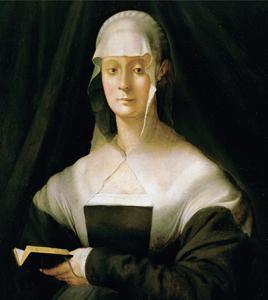 Elena Cassandra Tarabotti was born in Castello, Venice, on this day, the 24th of February in 1604.

At eleven Elena entered the Benedictine cloister at Sant’Anna in Venice, taking the religious name Arcangela. This was involuntary, she was placed in the convent by her father because he believed she was unmarriagable. Apparently this was a common practice at that time and place. Despite her conditions, or in part because of access the cloister provided, she was able to educate herself, reading widely.

(As an aside one of her sisters, Caterina, would become a painter of some note. However, while the image showed here accompanies a lot of what I found on the web about Arcangela, there in fact appears to have been no contemporary painting of her, including by her sister…)

Arcangela Tarabotti was an early modern Italian writer. She has been described as “a protofeminist writer as well as an early political theorist.”

A “versatile polemicist,” she was the author of at least seven works, five of which were published in her lifetime. The Oxford bibliographies states she “was the most radical female voice of her century: in treatises, confessional and memorial works, satire, and letters, she openly criticized the social, political, and religious forces that contributed to the mistreatment and subjugation of women in 17th-century culture.”

One of her posthumously published works, La simplicity ingannata was placed on the Index of forbidden books.

A principle concern of hers was the practice of forcing women against their wills into monastic life. Beyond that she was concerned with women’s right to education, personal autonomy, and the general treatment of women in patriarchal cultures. The Wikipedia article about Arcangela says her “writing melded autobiography, fictional account, literary critique, political manifesto, invective, and hermeneutics, to create powerful works that forwarded a provocative protofeminist politics.” A remarkable person.

According to Elissa Weaver:

“She did not spare fathers, nor the Venetian state that quietly supported the practice in order to limit the size of the aristocracy, nor the Church, which officially condemned it, but remained silently complicit, unwilling to uphold its principles and defend the exercise of free will. Tarabotti’s complaint did not remain a personal one. She understood that misogyny was the source of her oppression and that all women were its victims, and she spent her life defending women and exposing the illogic of arguments for their inferiority and suppression. Through her writing and her forceful personality Arcangela Tarabotti made connections in the literary and publishing world of Venice and beyond, and despite being an enclosed nun she was able to publish her work. She could not let the misogynist behavior of men stand without response: she wrote that ‘he who stings must be stung.‘”

She died in the convent in 1652. Arcangela Rarabotti was forty-eight.

February 26, 2022 Ma Roshi Maurine Stuart
Recent Comments
0 | Leave a Comment
"I'm sorry to begin with an act of self-advertisement, but everything I want to say ..."
Charles Upton Frithjof Schoun & Traditionalism
"this site will not unsubscribe me so i'm getting back MY way. HAHAHAHAHA! https://uploads.disquscdn.c..."
Robert Willis Water and Light Soaking into the ..."
"i KNOW that ALL religions are for people that were indoctrinated as children and still ..."
Robert Willis Water and Light Soaking into the ..."
"Ive seen more and more Chirstian Buddhists. I wondered why Buddhists have lost their compassion ..."
Brianna LaPoint Zen Meditations on the Mysteries of ..."
Browse Our Archives
Related posts from Monkey Mind