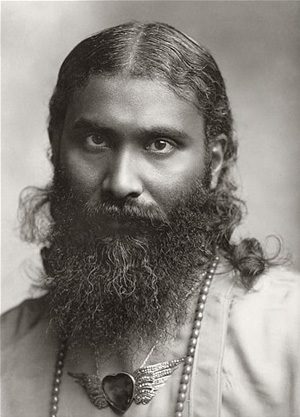 Inayat Khan Rehmat Khan Pathan died in Delhi, India, on this day, the 5th of February, in 1927. He is more commonly known as Hazrat Inayat Khan. Hazrat being an honorific. And sometimes by the title Pir-O-Murshid, which could be understood as senior teacher and head of a Sufi order.

He was born in Vadora, Gujarat in India, on July 5th, 1882. His family had been prominent musicians for generations. His maternal grandfather had been called the “Beethoven of India.” And, critically, he was an initiate within several Sufi orders. Principally he was a teacher within the Nizamiyya sub-branch of the Chisti Order.

In 1910 Inayat Khan came West, touring as master musician. But, he quickly shifted his focus to teaching Sufism. He married an American, and had four children. The most famous outside of his community is probably his daughter Noor-un-Nisa, who was executed by the Nazis as an Allied Special Operations agent during the Second World War.

Hazrat Inayat Khan’s order was one of several emergent spiritualities blending Eastern and Western wisdom to burst on the scene in the early decades of the twentieth century. As an eclectic he developed a universalist Sufism. A significant feature was not requiring people to convert to Islam to study with him or to receive his initiations. This approach, while historically defensible (there was a long tradition in India of non Muslims being accepted into Sufi orders), this practice is, however, not accepted within the mainstream of Islamic Sufism. Reading into the subject one will find some strong denunciations of the movement because of this.

And in looking at the ten principals of this universal Sufism, one can see both why orthodox Muslims might object to it, and at the same time how compelling the message itself is.

While highly controversial within the orthodox Muslim community, his message of love, harmony, and beauty has continued to find resonances ever since. Here’s a delightful account of his meeting with the Zen priest Nyogen Senzaki told by the old priest. I find it an interesting expression of the non dual perspective which I personally consider the living current that informs all mystical traditions.

In 1927, on his first visit back to India in nearly twenty years, as I’ve noted, he unexpectedly died of influenza. Today, ninety-five years ago.

I spent a fruitful period between my Zen monastic experience and my in-depth study of koan introspection investigating among other things Inayat Khan’s Sufism. While it did not prove to be my life path, it marked me significantly, and I remain grateful for its teachers and teachings. Of these I would hold up in particular Samuel Lewis’ heirs Murshids Wali Ali Meyer and Moineddin Jablonski. Also, while staying at the Inayat Khan Sufi khankah in San Francisco, I met Jan Seymour. As it happens Sufism wasn’t going to prove to be her path either. But, our personal paths did intertwine. Our fortieth wedding anniversary is coming up in June. So, my debt to this school is complex as well as profound.

Today a new generation of practitioners and leaders has come to the fore, allowing Inayat Khan’s Universalist Sufi Message to flourish in several organizations. There are several widely respected teachers of Inayat Khan’s universalist Sufism. Of these probably the best known is Zia Inayat Khan, Vilayat Khan’s eldest son, and the grandson of the master Hazrat Inayat Khan.

Through these teachers and organizations I feel confident saying this movement started by Hazrat Inayat Khan is flourishing, and will continue for some time yet to come, a healing balm for broken hearts…

February 6, 2022 Priestley Dies
Recent Comments
0 | Leave a Comment
"I'm sorry to begin with an act of self-advertisement, but everything I want to say ..."
Charles Upton Frithjof Schoun & Traditionalism
"this site will not unsubscribe me so i'm getting back MY way. HAHAHAHAHA! https://uploads.disquscdn.c..."
Robert Willis Water and Light Soaking into the ..."
"i KNOW that ALL religions are for people that were indoctrinated as children and still ..."
Robert Willis Water and Light Soaking into the ..."
"Ive seen more and more Chirstian Buddhists. I wondered why Buddhists have lost their compassion ..."
Brianna LaPoint Zen Meditations on the Mysteries of ..."
Browse Our Archives
Related posts from Monkey Mind