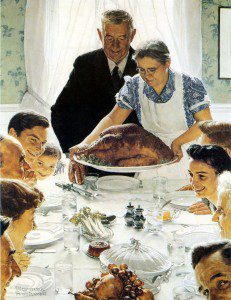 I’ve been thinking a lot about the word freedom, and what it means. Over the past several years we’ve been presented with a number of views on the subject focusing on one’s right not to cooperate in a public health crisis.

Then, abruptly, we’ve found ourselves confronted with a nation being invaded by a neighbor with the intent of bringing down the government and either installing a puppet or simply annexing substantial parts or perhaps even the whole thing. All of a sudden freedom has been given a different nuance. At least for some of us.

And, I believe there’s a lot more to that word, yet.

It was on this day, the 6th of March, in 1943 that Norman Rockwell’s painting Freedom from Want was presented to the general public in the Saturday Evening Post.

It was the last of Rockwell’s Four Freedoms series inspired by Franklin Roosevelt’s 1941 State of the Union address.

Personally find the president’s address, and the accompanying paintings by Rockwell are a beautiful if not completely adequate summation of what I believe freedom is.

Possibly of interest to some, is that when the painting was published in that issue of the Saturday Evening Post it was accompanied by an essay by the Filipino born American immigrant, poet and essayist Carlos Bulosan.

It might just be the right time to revisit President Roosevelt’s State of the Union, those paintings, and, here below, Carlos Bulosan’s essay.

If you want to know what we are, look upon the farms or upon the hard pavements of the city. You usually see us working or waiting for work, and you think you know us, but our outward guise is more deceptive than our history.

Our history has many strands of fear and hope that snarl and converge at several points in time and space. We clear the forest and the mountains of the land. We cross the river and the wind. We harness wild beast and living steel. We celebrate labor, wisdom, peace of the soul.

When our crops are burned or plowed under, we are angry and confused. Sometimes we ask if this is the real America. Sometimes we watch our long shadows and doubt the future. But we have learned to emulate our ideals from these trials. We know there were men who came and stayed to build America. We know they came because there is something in America that they needed, and which needed them.

We march on, though sometimes strange moods fill our children. Our march toward security and peace is the march of freedom—the freedom that we should like to become a living part of. It is the dignity of the individual to live in a society of free men, where the spirit of understanding and belief exists; of understanding that all men, whatever their color, race, religion or estate, should be given equal opportunity to serve themselves and each other according to their needs and abilities.

But we are not really free unless we use what we produce. So long as the fruit of our labor is denied us, so long will want manifest itself in a world of slaves.

It is only when we have plenty to eat—plenty of everything— that we begin to understand what freedom means. To us, freedom is not an intangible thing. When we have enough to eat, then we are healthy enough to enjoy what we eat. Then we have the time and ability to read and think and discuss things. Then we are not merely living but also becoming a creative part of life. It is only then that we become a growing part of democracy.

We do not take democracy for granted. We feel it grow in our working together—many millions of us working toward a common purpose. If it took us several decades of sacrifice to arrive at this faith, it is because it took us that long to know what part of America is ours.

Our faith has been shaken many times, and now it is put to question. Our faith is a living thing, and it can be crippled or chained. It can be killed by denying us enough food or clothing, by blasting away our personalities and keeping us in constant fear. Unless we are properly prepared the powers of darkness will have good reason to catch us unaware and trample our lives.

The totalitarian nations hate democracy. They hate us, because we ask for a definite guaranty of freedom of religion, freedom of expresson and freedom from fear and want. Our challenge to tyranny is the depth of our faith in a democracy worth defending, although they spread lies about us, the way of life we cherish is not dead. The American dream is only hidden away, and it will push its way up and grow again.

We have moved down the years steadily toward the practice of democracy. We become animate in the growth of Kansas wheat or in the ring of Mississippi rain. We tremble in the strong winds of the Great Lakes. We cut timbers in Oregon just as the wild flowers blossom in Maine. We are multitudes in Pennsylvania mines, in Alaskan canneries. We are millions from Puget Sound to Florida. In violent factories, crowded tenements, teeming cities. Our numbers increase as the war revolves into years and increases hunger, disease, death and fear.

But sometimes we wonder if we are really a part of America. We recognize the main springs of American democracy in our right to form unions and bargain through them collectively, our opportunity to sell our products at reasonable prices, and the privilege of our children to attend schools where they learn the truth about the world in which they live. We also recognize the forces which have been trying to falsify American history—the forces which drive away many Americans to a corner of compromise with those who would distort the ideals of men that died for freedom.

Sometimes we walk across the land looking for something to hold on to. We cannot believe that the resources of this country are exhausted. Even when we see our children suffer humiliations, we cannot believe that America has no more place for us. We realize that what is wrong is not in our system of government, but in the ideals which were blasted away by a materialistic age. We know that we can truly find and identify ourselves with a living tradition if we walk proudly in familiar streets. It is a great honor to walk on the American earth.

If you want to know what we are, look at the men reading books, searching in the dark pages of history for the lost word, the key to the mystery of the living peace. We are factory hands, field hands, mill hands, searching, building and molding structures. We are doctors, scientists, chemists discovering and eliminating disease, hunger and antagonism. We are soldiers, Navy men, citizens, guarding the imperishable dreams of our fathers to live in freedom. We are the living dream of dead men. We are the living spirit of free men.

Everywhere we are on the march, passing through darkness into a sphere of economic peace. When we have the freedom to think and discuss things without fear, when peace and security are assured, when the futures of our children are ensured—then we have resurrected and cultivated the early beginnings of democracy. And America lives and becomes a growing part of our aspirations again.

We have been marching for the last one hundred and fifty years. We sacrifice our individual liberties, and sometimes we fail and suffer. Sometimes we divide into separate groups and our methods conflict, though we all aim at one common goal. The significant thing is that we march on without turning back. What we want is peace not violence, We know that we thrive and prosper only in peace.

We are bleeding where clubs are smashing heads, where bayonets are gleaming. We are fighting where the bullet is crashing upon armorless citizens, where the tear gas is choking unprotected children. Under the lynch trees, amidst hysterical mobs. Where the prisoner is beaten to confess a crime he did not commit. Where the honest man is hanged because he told the truth.

We are the sufferers who suffer for natural love of man for another man, who commemorate the humanities of every man. We are the creators of abundance.

We are the desires of anonymous men. We are the subways of suffering, the well of indignities. We are the living testament of a flowering race.

But our march to freedom is not complete unless want is annihilated. The America we hope to see is not merely a physical but also a spiritual and intellectual world. We are the mirror of what America is. If America wants us to be living and free, then we must be living and free. If we fail, then America fails.

What do we want? We want complete security and peace. We want to share the promise and fruits of American life. We want to be free from fear and hunger.

If you want to know what we are—We are Marching!

March 4, 2022
Faustus Socinus and a Naturalistic Christianity
Next Post