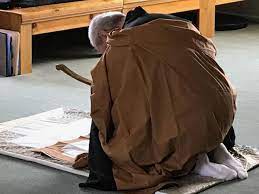 I recall reading how someone quoted from the wonderful teacher Norman Fischer’s Mountains and Rivers Sutra.

“When the Chinese encountered the word ‘dhyana’, the Pali word for meditation, they translated it into something that sounded like ‘dhyana’ in Chinese. They chose the word ‘Chan’ which became ‘zen’ in Japan. But ‘Chan’ or ‘zen’ doesn’t mean meditation, it only sounds like the Pali word that means meditation. The literal meaning of ‘Chan’ is ‘to bow before mountains and rivers.’”

As Zen is the Japanese pronunciation of Chan, it might be interesting to know.

He, the quoter, then asked if anyone could verify that definition for the word.

This was social media, and it opened quite the range of comments. Mostly of the posturing sort. Of course there were a couple of amateur Zen masters sneering about the inferiority of dualistic thought.

Another offered a view of whether the word dhyana is Sanskrit or Pali. Apparently certain this was particularly meaningful, rather than a small correction.

Others were more serious. The bottom line of it is that there seems to be no natural connection of Chan to “mountains and rivers.”

The Venerable Fischer is a poet. He is also a practitioner of the discipline. And a teacher of our intimate way. And wherever he picked up that “The literal meaning of ‘Chan’ is ‘to bow before mountains and rivers’” I personally find a connection between worshiping Heaven, Sacrificing to the Earth, and bowing to the Mountains and Rivers, and just sitting.

To bow before mountains and rivers.

March 7, 2022
The Mahayana in a Nutshell: The Four Seals, The Two Truths, and the Three Bodies
Next Post

March 10, 2022 Ten Seconds: Remembering the Long Beach Earthquake of 1933
Recent Comments
0 | Leave a Comment
"everything Jesus has to say about being a true believer of the true way is ..."
Isa Kocher HONEST TO JESUS: The Zen minister ..."
"My translation at http://home.pon.net/wildros...and here https://terebess.hu/english...Terebess has 26 translations at https://terebess.hu/zen/tex..."
Gregory Wonderwheel Faith in Mind, the Xinxinming, a ..."
"Happy birthday in advance, thanks for this thoughtful article and the ones to follow it."
Oliver Oehm Sun Faced Buddha, Moon Faced Buddha: ..."
"Thanks, James. While not specifically Zen, a sangha member alerted me to the book A ..."
Julie A. Nelson Holders of Lineage: A Small Meditation ..."
Browse Our Archives
Related posts from Monkey Mind