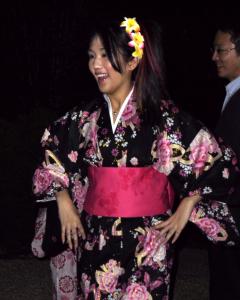 As it happens, today, the 15th of July is the beginning of Obon, also called Bon, in Japan. It derives from a Chinese Buddhist/Taoist Zhongyuan festival, often translated at the Ghost festival.

In China the date for it is the 15th (in some places apparently the 14th and others the 16th) day of the 7th month in China’s traditional solar/lunar calendar. So, easily translated into the 15th of July in the Gregorian solar calendar.

The festival’s history is associated with a story from the Ullambana or Yulanpen Sutra, where one of the Buddha’s closest disciples Maudgalyayana was able to see through clairvoyance that his mother had fallen into the realm of hungry ghosts. The Buddha advised him to generate merit on behalf of his mother, by providing support for some monastics. He does this on the 15th day of the 7th month, and releases her from the hungry ghost realm.

In China and later in Korea, Vietnam, and Japan a major festival has grown out of this story. In Japan, Obon features dances, possibly originally a part of the Pure Land tradition of Nenbutsu-odori, liturgical dances, in addition to a ceremony of lighting lanterns.

Here in North America in the Buddhist Churches of America, Sotoshu Zen temples, and other Japanese Buddhist denominations, Obon has become a major event. The festival usually includes those dances, lanterns, food, taiko, and a general celebration of Japanese culture.

In some convert Zen Buddhist sanghas Obon has been moved to the 31st of October. Not without controversy.  How this Buddhist holiday with deep cultural roots in East Asia becomes a Western religious holiday is still an open question.

I’ve reflected once or twice about liturgical calendars for our emerging Western Zen Buddhism. Those questions of our our (Zen) Buddhist communities will root here are deeply interesting to me. Personally I like the layering of meanings with All Hallow’s Eve, its ancient European pagan aspects, and its more recent but at this point also ancient Christian overlays and, frankly, cooption, have meaning for Western Zen Buddhists, coming to us as children.

And, I like the holiday in July. It can be found totally uniquely with its own rich layering.

Of course, whether midsummer or harvest time, this is something that touches that sense of times where the web between the worlds of the living and the dead not only wears thin, but tears here and there. For many in the West very much like Halloween.

But, with somewhat different purposes.

July 14, 2022
One Big Soul: Thinking of Woody Guthrie and the Call of our Better Angels
Next Post