Squeezing Through the Eye of a Needle 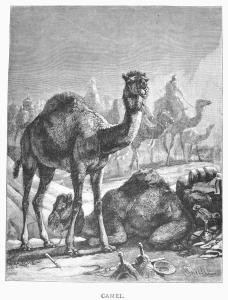 I’m always happy when there’s a new posting from Andrew Henry’s wonderful wonderful Youtube channel, Religion for Breakfast. If you’re not familiar with it and you care at all for a scholarly approach to the matters of religion, you are in for a treat. You’re welcome.

On the 18th of this month, Dr Henry dropped a video exploring the gospel passage from Mark 10:25

“It is easier for a camel to go through the eye of a needle, than for a rich man to enter into the kingdom of God.”

As someone raised a poor people’s Baptist through my childhood and earliest adolescence I heard any number of sermons that repeated that passage, which is also quoted in both of the other Synoptic gospels, Matthew and Luke, as well as in the Quran.

Dr Henry explores the plausibility of those popular alternative interpretations of what Jesus “really said,” that the word “camel” is a mistranslation of “rope,” or that there’s a low door in Jerusalem’s wall called the “eye of the needle” where a camel would have to get on its knees in order to pass through. Want to know the scholarly likelihood of either proposition? Watch Dr Henry’s video, I’ve posted it below, it’s worth fourteen of your minutes to get the results of his deep dive.

But I’ll also give you a spoiler.

What Jesus probably said is just exactly what we get in Mark.

It’s easier for a camel to pass through the eye of a needle than for a rich person to pass into the kingdom.

The sermons I heard in my childhood thundered a message that one cannot serve God and mammon. And that the rich, by which they understood people with more money than it takes to pay the rent and put food on the table and to buy some clothing, were all in imminent danger of their immortal souls facing eternal torture. By my best guess of their working definition rich meant pretty much anyone from middle management up.

Years have passed. My spiritual journey has taken me in other directions, for the most part.

But, I find myself thinking about that passage (and others attributed to the good rabbi) from time to time. And how powerful that particular message seems to continue to be. It’s especially interesting to me how so many want to deny it, or soften it. And as it turns out for a good long time.

But no one does the denial as well as our contemporary white Evangelicals. Interesting for biblical literalists, I think.

It seem axiomatic that the church Jesus preached taught the rich oppressing the poor was satanic. A boatload of things follow that axiom. A church of the poor for the poor by the poor.

Of course the spirit of that church survives, or has to some degree. There was that poor people’s church of my childhood. And I believe it continues more or less among some African American churches. We hear hints of it from the current Roman pontiff, as well. And here and there from individuals and small bands of Jesus’ friends.

A Christianity that actually stands with the poor in an unequivocal way might be quite an interesting thing.

July 22, 2022
Faith in Mind, the Xinxinming, a Dozen Translations of a Central Zen Text
Next Post