A Fervent and Necessary Arrangement: A Dharma Talk on Case 29 in the Blue Cliff Record 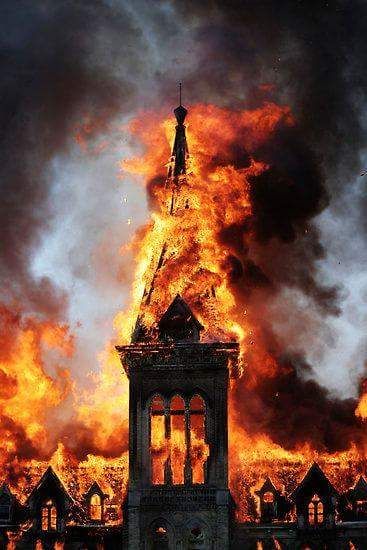 A Fervent and Necessary Arrangement.
A Dharma talk

A monk said to Dasui, “When the thousands of universes are altogether and utterly destroyed in the kalpa fire — I wonder whether this perishes or not.” “This perishes,” said Dasui. “If so,” persisted the monk, “does it follow the other?” “It follows the other,” said Dasui.

This story is also collected with an addendum of sorts in the Book of Serenity, as that collection’s case 30. In that telling the monk isn’t very satisfied with Dasui’s response to his, if you will, burning question. So, he goes to another master and asks the same question, and is told, “it does not perish.” The monk asks why this response, and is told, “because it is the same as the whole universe.”

A “no” like the Kalpa fire. If you’re unclear on the concept, in Buddhist mythologies the universes exist in cycles, and they end, and I presume birth in Kalpa fires. So, the end of the end times. At least as far as all the things of the universe are concerned. You know, like you and me.

Also, in the Book of Serenity, we get a variant for the Mu koan. Or, in this case, perhaps we should call it the dog koan, as the question presents as a query about the Buddha natureness of a dog. We should infer it’s really about you and me. Otherwise, it’s pretty abstract, and despite appearances to the contrary, koans are never about the abstract. In that version, when the student of the way asks her question, she is told “yes.”

No. Yes. Perishes. Does not perish.

The perfect conundrum. Kind of like our lives, don’t you think?

Dasui Fazhen lived from late in the 9th century until well past the middle of the 10th. He lived and taught mostly in Sichuan, of pepper corn and chili fame. It is said for a decade or so he lived in a hollow tree behind a temple on Dasui mountain, from which we get his name.

He gives calls us to the Kalpa fire and everything perishing. No soothing doctrines. More old Ring of Fire by June Carter and sung by her husband with those Mexican horns in the background.

For me its hard not to recall T. S. Eliot’s Fire Sermon in the Wasteland.

Very specific. This whole project of ours, the Zen way, and our practices of presence which are really practices of intimacy, and koan introspection which tells us stories about ourselves, always as invitations. Always, not generalized, but specific. You. Me.

And what about this “this,” this “it?” What can it mean if we turn our attention, if we allow authentic intimacy with ourselves? All of ourselves. Not tricked by any boundary, however useful in the moment it might be. Well, lots of things can happen.

James Joyce is a hard slog, and I have to admit I’ve never finished either Ulysses or Finnegans Wake. But I loved the Dubliners. In the Dubliners he speaks of a character, perhaps you? Sometimes it has been me, without a doubt.

“He lived at a little distance from his body, regarding his own acts with doubtful side-glances. He had an odd autobiographical habit which led him to compose in his mind from time to time a short sentence about himself containing a subject in the third person and a verb in the past tense.”

Trying to stamp out the lingering coals of the ancient fire.

Now there are a couple of ways to take all this. Repairing that breach between who we see ourselves as and our bodies is an important project. And honestly, if one’s spiritual disciplines only take us to that, it’s worth a great deal of time and trouble. It’s an important project to own our lives and to be owned by our lives.

But to be brutally honest, our way doesn’t really need for us to be healthy and balanced and integrated. It’s after something, not actually different, but of a different magnitude. The what that needs integration turns out to extend a long ways past our skin.

In her poem “Sometimes,” Mary Oliver, who I on occasion think of as the Zen teacher’s teacher, points to the project we find in the Zen way.

I think of that fervent and necessary arrangement. And that “this” and that “it.” And, of course, the Kalpa fire.

For me its captured perfectly in the Jewel Mirror Samadhi, a poem attributed to the 9th century Chan teacher Dongshin Liangzie. In that poem there is a specific, pregnant, wondrous, and if you think about it, terrifying line.

You are not it, but in truth it is you.

For me that line jumbles with a number of things. Few of them having to do with balanced and healthy lives. But rather something vastly, vastly more important. It has to do with life and death. With meaning and direction. It takes us to some things that we give big words to: Life, Truth, Love. As to the line itself, there are a couple of translations. I find it helpful to triangulate on what they’re being pointed to.

For Reiho Masunaga the line goes: “You are not him; he is actually you.”

For William F Powell the line goes: “You are not him, but he is clearly you.”

I find them interesting, in part because they seem compelled to throw gender into the matter, where I’ve been assured it does not exist in the original text. Of course, it also invites another reading: you are not she; she is actually you. You are not she, but she is clearly you.

It. This. Kapla fire?

On the spiritual way, at least as it is taught within the Zen schools, and captured in the ten Ox Herding Pictures, another of our fundamental texts, we come to the loss of all our ideas about ourselves and the world.

Here, in that moment, the one we’re invited into in that conversation about the Kalpa fire, we tumble into the great empty. Another big word with Life and Truth and Love. Empty. But a very lively empty it is.

Here in the midst of the Kalpa fire, along with ends to all things, we find renewal, we find rebirth. All of it found as nothing other than the being we are. That is, you. That is, me. Burning, burning, burning. Burning. One follows the other. The fervent and necessary arrangement.

“I am not it.” My ideas my desires, I own them. They play out as me, and my part of the great net of things.

“In truth.” A line that may not exist in the poem, I’m not sure. But, in truth, within truth is right. A moment of turning. A realization. The great lacuna within which all things birth and die. Truth. A lovely word. Even if it’s not there. It is felt.

This. It. The Kalpa fire.

Eliot, again, he got a bit of what we’re talking about when we speak of this, of it. Of the Kalpa fire we’re being invited to notice. From Little Gidding.

The dove descending breaks the air
With flame of incandescent terror
Of which the tongues declare
The one discharge from sin and error.
The only hope, or else despair
Lies in the choice of pyre of pyre-
To be redeemed from fire by fire.

Who then devised the torment? Love.
Love is the unfamiliar Name
Behind the hands that wove
The intolerable shirt of flame
Which human power cannot remove.
We only live, only suspire
Consumed by either fire or fire.

This is the project. Healthy. Unhealthy. Dying. Living. Loving.

This. It. The Kalpa fire. Love.

Love is a word that should be used a bit more in our Zen circles. Love is the project. Love as this. Love as it. Love is the Kalpa fire. Burning.

When we find this intimate truth as our own truth, we return to the world. This world, not some other world. This world on fire. This world of fire. And we bring a good word. We reach out a hand as we can. After all, we are the infinite itself in everything, in every one of us.

This. It. The Kalpa fire.

You are not it. But in truth it is you. This necessary and fervent arrangement.