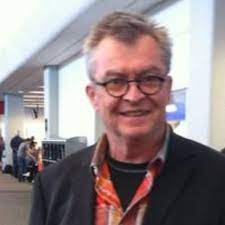 (Ken was Ivy League and Jesuit trained, and for some years a member of the Society of Jesus. He currently lives in Dharamshala. Ken’s a long time Zen practitioner and a friend. He’s taken an interest in my current deep dive into the Psalms project, and it inspired a poem cycle. This is the third of the cycle, first published at Ken’s Buddha SJ blog and shared here by permission.)

The Days are growing shorter, and the night is as black as it gets. We still look within.

An Exegesis on the Blackness of the Night

I grew up in the country
But even in rural Connecticut
There were lampposts
Every 50 yards.
They kept us safe from

Hidden dangers.
Perhaps a wandering cow
Or a drunken suburban dad struggling to find his door.

Here in Jogiwara
Night is night
Black is black.

When we need to light the rocky path
We carry a big flashlight
And hope that the batteries are charged.

Was it was easier before the miracle of
Electric power?

My Aunt Judy loved her job at United Illuminating.
She said the hardest task ever
Was when she rang the doorbell at dusk
To tell his family that their son, brother, husband
Had died touching a hot wire that
Dangled on the country road.

There was no hiding.

On the occasion of the Long Life Puja offered by the Indian disciples of His Holiness the Dalai Lama, September 7th 2022
Psalm 56:8

Alex loves Tibet like Whitman loved the Union.
Close to adoration
The practice came at just the right moment.
It usually does.

O Captain, my Captain
Is a man who lives in a nearby house
Who loves his dogs.

“Thou tellest my wanderings: put thou my tears into thy bottle: are they not in thy book?”

It’s a tenuous journey
“You have delivered me from death and my feet from stumbling.”
The Psalmist has put his left foot first.

If at the end of the Path you step into a life
Other than the one you have,
That mistake seems inevitable.

“who commanded, or prepared a spider, to perfect in the mouth of the cave a web for me;” Targum commentary of Psalm 57*

Indra’s net of jewels catches the spider
What shape is this?
A vast multi cornered trapezoid
Depends entirely on whim
Or a design we cannot fathom.

The Buddhists with their ineluctable cause and effect
Want to have one step follow another
Like the Gelugpa monk chasing down the cause
To trap an imaginary opponent into adhering to the Way.

The spider’s web is just a catcher.
Indra’s jewels, nestled in the junctures
Signal being, is
Gracefully caught in the fullness of life.

David’s Master of Song
Plays a cat and mouse tune,
Allusion and deception
Coupled with G_d’s grace to save the day.

Traps for heady Jews
Who try to sit quietly and contemplate
The tight web artfully strung between the rocks.

This one requires some notes:

*The rabbins tell a curious and instructive tale concerning this: “God sent a spider to weave her web at the mouth of the cave in which David and his men lay hid. When Saul saw the spider’s web over the cave’s mouth, he very naturally conjectured that it could neither be the haunt of men nor wild beasts; and therefore went in with confidence to repose.”

The Targum curiously paraphrases this clause: [from Psalm 57 v2] “Who ordered the spider that wrought the web, on my account, at the mouth of the cave;” applying a later historical fact, which, however, may have had its prototype

Dredging up Buddha from the Yangtze

The idols of the nations are silver and gold, made by human hands.
They have mouths, but cannot speak, eyes, but cannot see.
They have ears, but cannot hear, nor is there breath in their mouths.
Those who make them will be like them, and so will all who trust in them.

A seated monk emerged covered in mud
Not silver and gold

Fourth or fifth century
Old, but not dusted off from Deer Park.

His appearance seems like an oracle
Or the answer to the question posed to the Ouija board.

Tinkering with water and deserts
The reservoir was made by human toil.

But is he right or wrong
About no breath in their months?

Yes the Statue is very dead,

But the Psalmist wished it weren’t so.

He loves the living God.

The only part I really like is that the Buddha was covered in mud.

But my liking is liking that does not like.

The recent drought has revealed a trio of Buddhist statues on it that are believed to be 600 years old, state media Xinhua has reported. Three Gorges Dam is 578 km from Chongqing, more than a 6 hour drive. 181 m (594 ft) high, holding back thousands of liters of water of the Yangtze. It is an engineering feat. It also displaced at least 1.3 million people and destroyed natural features as well as countless rare architectural and archaeological sites. The dam’s reservoir is blamed for an increase in the number of landslides and earthquakes in the region.

September 7, 2022
On The Dangers of Being an Ironist in Literalist Times.
Next Post