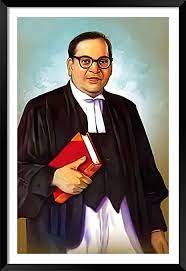 Today, on the 14th of October, in 1956, Dr B. R. Ambedkar shook India when he converted to Buddhism.

I try to note this occasion as it rolls by in the calendar. Partially because he deserves to be celebrated. But, also to let people who might not otherwise be aware of him, to know a bit about this remarkable figure of Twentieth century Buddhism.

I believe Dr Ambedkar well may provide a signifiant part of the puzzle as to what Buddhism will look like in the Twenty-first century.

Known to those who admired him as Babasheb, B. R. Ambedkar was first one of the singular figures of the Indian revolution. Then he served in leadership with the fledgling republic. And, last, as a religious leader.

In all these turns, he was a revolutionary.

For a few more details. Bhimrao Ramji Ambedkar was born on the 14th of April, in 1891.

While an untouchable (the term in general use has shifted to “dalit,” largely led by Ambedkar himself) his father, like his grandfather before, served in the British Army, and because of that he had access to an education.

Nonetheless, the indignities he suffered ranging from not being allowed to sit inside the classroom, to having to sit on a gunny sack he brought with him to and from school so as not to contaminate the ground, to only having access to water at school if a paid servant was there to pour the water that the boy would otherwise not be allowed to touch again because his touch would contaminate it for everyone else, marked his understanding of many things.

The boy was brilliant. He graduated from Bombay University, and then won a scholarship to Columbia, where he earned his first doctorate. From there he went on to earn a law degree and a second doctorate at the London School of Economics before turning his attention to what would become his life work. In 1924 he established the Bahishkrit Hitkaraini Sabha, the Outcastes Welfare Association. Three years later he led a mass march at the Chowder Tank in Colaba, outside Bombay, demanding that untouchables have the right to draw water.

As civil rights leaders Dr Ambedkar and Mohandas Gandhi worked in an uneasy alliance. While Ambedkar was committed to independence, he had little trust of the dominant culture, and continued to press hard on behalf of the dalit communities. When Gandhi and others introduced the term “harijans,” meaning “people of God,” for the untouchables, rather than their own preferred term “dalit,” Ambedkar opposed having the term foisted upon them as one more example of being marginalized. He did quip that if his people were the children of God, then the upper casts would all be the children of monsters.

When India achieved independence, Dr Ambedkar was appointed India’s first law minister, basically India’s first attorney general. But, facing endless frustrations at his attempts to advance civil rights on behalf of all marginalized people, as a last straw, when his attempt to enshrine gender equality in laws concerning marriage and inheritance were frustrated, he resigned his office.

Instead Dr Ambedkar turned his attention to a new project.

For decades, feeling there was no place for him or the Dalit community within Hinduism, he had been on a spiritual quest. He explored the Sikh faith in depth, but eventually settled on Buddhism as the best way for himself and his people. He embarked on serious study and out of that wrote several books outlining what he thought was the great contribution of Buddhism both to modernity, and for oppressed peoples.

In 1956 Dr Ambedkar formally converted to Buddhism at a public ceremony. And immediately after his formal conversion, he led half a million Dalits present at that ceremony in their conversions. Yes, that was a half million people.

The movement was based in twenty-two vows, giving the emergent tradition its distinctive flavor.

While his several books outlined his hope for Dalit Buddhism, or, as many call it, Ambedkar Buddhism, he died later in the same year of his formal conversion, and so the implementation fell to others.

The Wikipedia article on Dalit Buddhism describes its distinctive features.

“Most Dalit Indian Buddhists espouse an eclectic version of Buddhism, primarily based on Theravada, but with additional influences from Mahayana and Vajrayana. On many subjects, they give Buddhism a distinctive interpretation. Of particular note is their emphasis on Shakyamuni Buddha as a political and social reformer, rather than simply a spiritual leader. They note that the Buddha required his monastic followers to ignore caste distinctions, and that he criticized the social inequality that existed in his own time. According to Ambedkar, a person’s unfortunate conditions are not only the result of karma or ignorance and craving, but do also result from ‘social exploitation and material poverty – the cruelty of others.’”

The same article cites the scholar Gail Omvedt who summarized the unique perspective of Dr Ambedkar’s Dalit Buddhism. “Ambedkar’s Buddhism seemingly differs from that of those who accepted by faith, who ‘go for refuge’ and accept the canon. This much is clear from its basis: it does not accept in totality the scriptures of the Theravada, the Mahayana, or the Vajrayana.”

Dr Omvedt then asks the question, “Is a fourth yana, a Navayana, a kind of modernistic Enlightenment version of the Dhamma really possible within the framework of Buddhism?” Given the existence of the movement, as well as other variations of modernist or rational Buddhisms in the twentieth and twenty-first centuries, whether some other Buddhists might not like it, the answer obviously becomes yes.

Today the movement exists across India, although concentrated in Maharashtra and Uttar Pradesh, and counts the majority of Indian Buddhists, probably about five million people.

So, today it feels worthy to take a moment we might pause and consider him, his movement, and maybe how some variation of these reformed Buddhisms might prove a healing balm for a troubled world.

October 15, 2022 Recalling the Zen Master Sengcan & His Song of Faith and Mind
Recent Comments
0 | Leave a Comment
"Universalism has a lot to offer humanity as a way forward. I wrote a book ..."
Matt Johnson Considering Universalism: The Secret Teaching of ..."
"I was always taught (since 1970) that in China, anyway, the five classic poses for ..."
Neva Trejo A Note on the Use of ..."
"A wonderful piece, James. I was recently sitting a week long thing, and two days ..."
Keith Angilly A Note on the Use of ..."
"Thank you, Mark."
jamesiford The Zen of Lewis Carroll: A ..."
Browse Our Archives
Related posts from Monkey Mind