I must have no hatred or bitterness towards anyone. 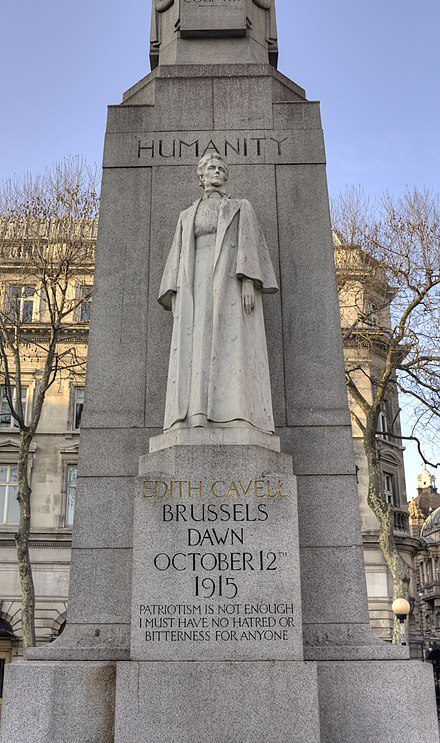 When the First World War began she already had an illustrious career and a nurse and educator, principally working in Belgium. At the time the war started she was matron of a hospital in Saint-Gilles.

She served all without regard to their nationality or status. But Cavell also helped wounded British and French soldiers, as well as young men of military age to flee occupied Belgium. She may also have passed on some military information to England.

On the 3rd of August, 1915 she was arrested by the German forces and charged with “war treason.” The court-martial was brief as she made no defense, freely admitting helping hundreds to flee. She was convicted and condemned to be shot. Cavell was executed by firing squad at 7am on the 12th of October, 1915, one hundred and seven years ago, today.

A devout Anglican Edith Cavell after her conviction and the day before her execution she was ministered to by the Reverend Stirling Gahan, an Anglican priest and prisoner of war, who gave her communion.

She said to the priest were “I am thankful to have had these ten weeks of quiet to get ready. Now I have had them and have been kindly treated here. I expected my sentence and I believe it was just. Standing as I do in view of God and Eternity, I realise that patriotism is not enough, I must have no hatred or bitterness towards anyone.”

On the morning of her execution she was accompanied by the German Lutheran chaplain, Pastor Paul Le Seur. He records her last officially recorded words as “Ask Father Gahan to tell my loved ones later on that my soul, as I believe, is safe, and that I am glad to die for my country.”

Her calm, her free admission of her work both to serve all the wounded regardless of their uniform, her free admission of helping hundreds to flee, and her dignity throughout earned her the admiration of many on all sides of the conflict. Cavell became an object for British propaganda during the war. And when war was finally over, the return of her remains became a major event in the country. In 1919 her body was transferred to England and following services at Westminster Abbey, she was interred at Norwich Cathedral.

Edith Piaf, who was born two months after her execution was named for Cavell. After the war a statue was erected in her honor in Brussels. In 1940 when his army occupied the country, Adolf Hitler ordered the monument destroyed. Other monuments would be built.

While she was a war hero, I think the reason she most deserves to be remembered is that while she did help so many soldiers and those eligible for drafting to escape, she actually always and it seems without hesitation helped all who came to her.

The really important words, the words I find moving to this moment, where those she said while facing death: I must have no hatred or bitterness towards anyone.

The Church of England honors her on this day, the 12th of October. In 2022, Cavell was also officially added to the Episcopal Church liturgical calendar with a feast day on 12 October.