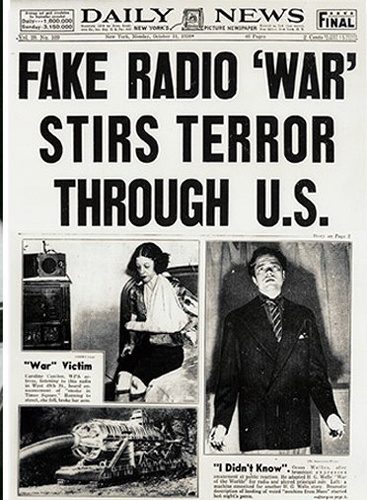 It was today, the 30th of October, 1938 that Orson Welles broadcast a radio adaptation of H. G. Wells’s The War of the Worlds, causing panic among some of the audiences across the United States.

I understand it, the narrative of the panic in the country has generally been overstated. But there was panic. These things do happen. I think of how easy it is in anxious times, to misread, to overreact, and sometimes to do bad things.

Four years later when the war that had been hovering and which no doubt had something to do with the anxiety around Welles’ broadcast began, there was the infamous “Battle of Los Angeles.” Anxious spotters in Southern California “saw” Imperial Japanese aircraft flying to LA, initiating an anti-aircraft barrage. As Wikipedia tells us

“Several buildings and vehicles were damaged by shell fragments, and five civilians died as an indirect result of the anti-aircraft fire: three were killed in car accidents in the ensuing chaos and two of heart attacks attributed to the stress of the hour-long action. The incident was front-page news along the West Coast and across the nation.” However no Japanese aircraft were ever found. And no Japanese artillery shells.

As to the War of the Worlds broadcast, again Wikipedia reported how “Some listeners heard only a portion of the broadcast and, in the tension and anxiety prior to World War II, mistook it for a genuine news broadcast. Thousands of them shared the false reports with others or called CBS, newspapers, or the police to ask if the broadcast was real. Many newspapers assumed that the large number of phone calls and the scattered reports of listeners rushing about or fleeing their homes proved the existence of a mass panic…” Which is the story we all know. Although the article itself concludes, “but such behavior was never widespread.”

So, sort of two stories here. People a bit too anxious and a bit too trigger happy. Does happen.

And, it was overblown. That happens, as well.

Is there a real lesson to be drawn from this? Well, probably a couple. All dealing with the human heart, our fragility, our fears, and our potential for violence. And of our propensity for exaggeration. As well as our ability to take data points and find meaning whether there is something meaningful there, or not.

I should note the Battle of Los Angeles has found a place among devotees of flying saucers, who offer an alternative view of what those anxious spotters actually saw.

As to the play itself. Here you go…

October 29, 2022
My Best Read on Jesus and His Message
Next Post

October 31, 2022 Save a Ghost: Reflecting on Halloween and a Zen Koan
Recent Comments
0 | Leave a Comment
"I was always taught (since 1970) that in China, anyway, the five classic poses for ..."
Neva Trejo A Note on the Use of ..."
"A wonderful piece, James. I was recently sitting a week long thing, and two days ..."
Keith Angilly A Note on the Use of ..."
"Thank you, Mark."
jamesiford The Zen of Lewis Carroll: A ..."
"Thanks!"
Bob Evans Considering Universalism: The Secret Teaching of ..."
Browse Our Archives
Related posts from Monkey Mind