A Book of Common Prayer: The Zen PIlgrim’s Early morning thoughts in a motel in Santa Cruz, sipping coffee in the dark while my spouse sleeps

November 6, 2022 by James Ford
0 Comments
A Book of Common Prayer: The Zen PIlgrim’s Early morning thoughts in a motel in Santa Cruz, sipping coffee in the dark while my spouse sleeps November 6, 2022 James Ford 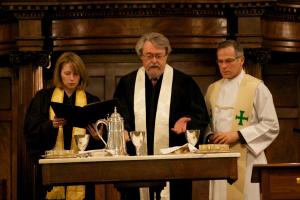 I’ve only been to King’s Chapel in Boston twice.

They are a delightful anachronism. Arguably the oldest Episcopal church in the United States, King’s Chapel became Unitarian in the years following the Revolution. They’ve kept a version of the Book of Common Prayer which is the basis of their corporate and individual worship.

The Reverend Carl Scovel, once minister of the church writes “King’s Chapel is an active institutional member of the Unitarian Universalist Association, but remains a church defined not by its polity, theology, or denominational affiliation, but by its liturgy. The preface to the 1986 revision states this clearly: ‘In an age of liturgical change and experiment, we at King’s Chapel are sometimes asked why we keep the Prayer Book. In fact, it is the Prayer Book that has kept us.'”

My first visit was for an installation service for Reverend Scovel’s successor. The second was just a month ago. I was hoping to attend a eucharist service, but they only celebrate on the first Sunday. So, my spouse and I attended a service of Morning Prayer.

I came away with two impressions. One was that it offered a beautiful if somewhat archaic service that I found very appealing. It embraced the Christian narrative completely, but also in an open manner that fully invited me as I am. I was deeply aware of this. And profoundly moved.

The second was that they have no congregation. There were maybe twenty people present, half of them paid. Because of endowments and income generated through tourism, I suspect they can continue to offer beautiful and somewhat archaic services to nearly empty pews for many years to come. For me a sadness. Because they offer something profound, I believe.

Actually there was a third take away. And it holds something of a promise that others might take on. The most distinctive feature of the King’s Chapel prayerbook is that it eliminates all creeds. Otherwise the service is Trinitarian in how the arc of the services are totally bound up in the life and death and resurrection narrative. It holds the story, but without defining it. Something I find compelling.

Something that allows nonduality. I’ll return to this.

But first I do understand there are several ways to hold the traditional creeds, especially the Apostle’s and the Nicene. It can be seen as a dream expression of the divine dynamic. It can very much be a poetic expression of the nondual in motion. Although it is almost certainly mostly seen as an assertion of a reality that, well, doesn’t map the real I’ve met in the world. For me a truth and a non-truth bound uncomfortably together.

For me right now I’m in a bit of a liminal space.

My little self confession, my “elevator speech” describing my faith is having a Buddhist brain (I do believe the four seals, impermanence, emptiness of self, constant motion of reality experienced by humans as a pervasive dis-ease, and a settling of the great hurt.), but a Christian heart (I learned to read from a King James Bible resting on my grandmother’s lap. The content of my dreams are woven out of the biblical stories, especially of Jesus and the Marys.), and a rationalist stomach (I am a naturalist. I believe the so-called spiritual and the so-called material are not two things. But anything that presents in this world can be measured, and with that analyzed. And one may and probably needs to make distinctions between true and false.)

I came to this basic position perhaps forty years ago. While it has held as the way I encounter the world since, what is emphasized has shifted over those years. And it is within this that I arrive at my current liminal place.

In the moment I despair of institutions. The institutions I despair about specifically are the Zen communities of which I’ve been a part for so long, and the Unitarian Universalist Association of which I’ve been a part for nearly as long. As to the UUA, the wound is small. Many years ago I came into that world because the Zen groups I practiced within had no particular sense of community or manifestation in the world. And the UUs provided that without a significant conflicting spirituality.

Although I’ve always loved the spirit that runs through Unitarian and Universalist history, especially the moment that birthed Transcendentalism. There was a period when I had hope that a rising intuition of radical interdependence could become a driving theological principal. It didn’t. It might yet. But I’ve come to doubt it.

For Zen, the wound runs deeper. The ecclesiastical aspect of Zen, the priestly transmission through the Japanese Soto inheritance remained a touchstone for me for many years. But the American expressions have fallen into an obsession with details of infraction and punishment, along with an insistence on liturgical formation that requires years long commitments with no place to go with that training after that training. But worst of all, from my perspective, is how so many appear to have lost the driving point of Zen as awakening itself. Yes, there are exceptions. The major alternative, the Japanese mission is only interested in the formation of clergy in the Japanese model. And, near as I can tell, nothing much else.

Right now, for Zen I find myself in loose alliance with the emerging lay koan driven communities. But feeling not quite part of their project, either. For a couple of reasons. For one I am a priest, a minister. It is bone deep part of my life. But also, they lack the specific communal grounding that originally led me to the Unitarians. The ones I like best seem mostly to align with Christian communities. Which I find very interesting.

In my moment right now, my little motto for my heart’s obsessions is how I don’t believe in God (certainly as most people would use the word) but I do believe in the mass. Friends describe themselves as cultural Christians. I get that. It sort of works for me. And. Once when I was on a panel with a bunch of academics, mostly Christian scholars of Buddhism. It was observed that my presentation was that of a Buddhist who loves Jesus. A bit messier than cultural Christian and sort of names me.

I am called into liturgical life. The material world is true. The spiritual world is true. They are in one sense identical, although it may be better to say, as I have, they are not two. But, there is a lively thing that happens as we notice the two aspects, a meeting place. That liminal in another incarnation. It has its own levels, but a starting spot is liturgy, is ritual, are those rites hallowed by time and attention and love.

The liturgies of Zen Buddhism are beautiful. And true. For me. But, they don’t quite have the atavistic appeal for me that I find in the Christian services. Among my sweetest memories are the celebrations of communion I presided at while senior minister at the First Unitarian Church of Providence. (That’s the picture above)

Me. I guess. Zen Christian? Perhaps. Although the ground for me is nondual, and that nondual is best informed by Zen Buddhism and those four seals. So more a Zen Buddhist who loves Jesus.

The great practices of zazen and the intimacy of koan introspection continue to be the ground for me. Although the Jesus prayer and occasionally an invocation of Mary have somehow slipped in with the deep silences.

I visited an old colleague a Christian Unitarian minister in a nursing home for this past year. Right until he died. As I write this we are in fact just returning from his funeral, a requiem mass held at Grace Episcopal Cathedral in San Francisco. For various reasons he and I fell into reading the psalms together. With that I found my old interest in Christian liturgies reignited. I found I especially loved the King’s Chapel prayerbook. (Although when using it I quietly made my own modifications with masculine by preference language)

I find myself wondering about Carl Scovel’s observation of how that prayer book might keep someone. And what that could look like.

Of course that’s the great Zen way, isn’t it?

Early morning thoughts in a motel in Santa Cruz, sipping coffee in the dark while my spouse sleeps…