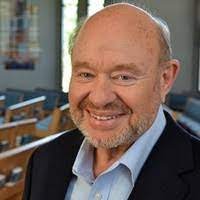 The Ministries and Faith Development staff of the Unitarian Universalist Association offer our condolences to the family and colleagues of the Rev. David P. Keyes, who died on September 13, 2022, at the age of 77.

David was born on January 21, 1945, in Kansas City, MO to G.J. Keyes and
Carolyn Keyes Ellis. He spent his childhood years in Kansas City and
Gallatin, MO mostly with his grandparents. His own Parish Minister, Dr.
Jack Wilson (Baptist) was a strong role model for him. David led his high
school church youth group but soon became alienated by small-mindedness and
began wandering. He could no longer stand the Baptist literalism; in 1960,
he joined All Souls Church in Kansas City. (Dr. Wilson later became an
Episcopalian.) From the first Sunday at the Kansas City church, David felt
that the Unitarians took him in and showed a larger world, one filled with
tolerance, new ideas, and a love of knowledge, art, culture, and music. He
felt a sense of gratitude and a sense of belonging.

Shortly after joining All Souls, he was off to the University of Missouri
graduating with his Bachelor of Science in Education (1966) and earning a
Master of Arts in Journalism (1971). He worked for fifteen years as a
teacher, journalist, editor, and public relations executive before
following his call to ministry. In 1985, he received his Master of Divinity
from Starr King School for the Ministry. In 1997, he earned his Doctorate

in Ministry from San Francisco Theological Seminary. His doctoral
dissertation is titled: “Global Partnership: Mission and Identity for
Congregations.”

Rev. Dr. Keyes was ordained on May 5, 1985, by All Souls in New York. He
served his first settled ministry at the First Parish Church in Taunton, MA
(1986-1987). His ministry marked significant gains in membership, Sunday
attendance, Church School enrollment, and pledge income. He organized a
youth group and choir and initiated a long-range planning process. From
1987 to 1988, Rev. Dr. Keyes was an interim minister at Boise UU
Fellowship, ID. He developed a program that led to the construction of a
new church building. Next, Rev. Dr. Keyes served his second settled
ministry at the Skyline Community Church, Oakland, CA (1990-1994). He
helped rebuild the Religious Education program and provided leadership for
several community programs, including tutoring and violence prevention. All
his subsequent ministries were interim, while he maintained his home in San
Francisco.

At the Congregational Community Church in Sunnyvale, CA (1995-1997), Rev.
Dr. Keyes helped the congregation to turn itself around and learn to trust.

The pledging doubled in his first year and the congregation became a
full-service church. The UU Fellowship of Santa Cruz County, CA (1997-1998)
widely appreciated Rev. Dr. Keyes for his courage in naming conflictual
congregational issues and creating the necessary congregational momentum
and structures to address them.

Likewise, Rev. Dr. Keyes guided the UU Church Davis, CA (1998-2000) through
the interim tasks. He was very diligent in pastoral care and reimagined
church governance adopting a modified version of the John Carver Model. He
provided valuable insight, advice, and necessary goading to All Souls
Church Unitarian, Washington, DC (2000-2001). He reorganized lay leadership
that had drifted, worked with lay leaders to reshape church governance, and
tackled an array of programs including a declining church school.
Subsequently, he served the First Unitarian Church of Rochester, NY
(2002-2003) and made significant progress in the exploration of new models
of governance, initiation of a small group ministry program, and a major
overhaul of the canvass.

From 2003 to 2004, Rev. Dr. Keyes served the Neighborhood UU Church of
Pasadena, CA and then the Unitarian Universalist Congregation of Atlanta,

GA from 2005 to 2007. At the Atlanta congregation, he elevated the needs of
Youth Religious Education (YRE), encouraged YRE to be more vocal about its
needs, and advocated strongly for them during the search process for a new
minister. He did it in a way that strengthened the connection between YRE
and leadership. Thereafter, he provided his interim services to the
following congregations: the First UU Congregation of Ann Arbor, MI
(2007-2008); the First UU Church of Houston, TX (2008-2010); Eliot
Unitarian Chapel, MO (2010-2012); the UU Church of Arlington, VA
(2012-2014) and Foothills Unitarian Church, Fort Collins, CO (2014-2015).
He retired in 2016.

Rev. Dr. Keyes’ mission in ministry was to strengthen congregations in
times of transition. In every interim ministry position he held, he made
notable progress in raising awareness of the importance of R.E., recruiting
teachers from a wider cross-section of the congregation, and having
children and youth be more visible in worship. He encouraged and empowered
new lay leadership. In 1998 he earned the Accredited Interim Minister (AIM)
designation. He was also a marvelous preacher and brought a depth of faith
rooted in the history and traditions of the church.

Rev. Dr. Keyes served as an associate faculty of Starr King School for the
Ministry (1991-2002). In 1993, he spent his sabbatical leave among
Unitarians of Hungary and Transylvania lecturing on UU history and theology
at the seminary in Kolozsvar, Transylvania. He was also active in
international church relations, visiting congregations in Hungary, India,
and the Philippines. In addition, he was the Founding President of Project
Harvest Hope, a UUA-affiliated foundation for economic justice and
development (1995-2001) and was President of the UUMA Pacific Central
District Chapter (1997-1998). He was a trainer of interim ministers of the
UUA (1999-2003) and chaired the UUA Interim Ministry Steering Committee
(2001-2002).  In 1997, he delivered the Minns Lecture titled “A Global
Vision for Unitarian Universalism,” out of which came his book “Most Like
an Arch: Building Global Church Partnerships.” In 2013, the UU Partner
Church Council awarded Rev. Dr. Keyes the Louis C. Cornish “Living the
Mission” Award for Outstanding Contribution to International Partnership.

In the community, David served as a Disaster Service Volunteer for the
American Red Cross; a founder of the Oakland Coalition of Congregations

Violence Prevention Project (1993). In his leisure time, he enjoyed
baseball, opera, and hiking.

A memorial service will be held at 2 pm on Thursday, November 3, 2022, at Grace
Cathedral, 1100 California St, San Francisco, CA 94108. John Buehrens will
deliver the sermon, and Unitarian Universalist Clergy are invited to robe and process.

The service will be live-streamed on Zoom.

Notes of condolences can be written here

Aastha Poudel
on behalf of the Unitarian Universalist Association

November 1, 2022
A Zen Jesuit Responds to My Best Read on Jesus and His Message
Next Post

November 2, 2022 My Prayers for the Dead
Recent Comments
0 | Leave a Comment
"A wonderful piece, James. I was recently sitting a week long thing, and two days ..."
Keith Angilly A Note on the Use of ..."
"Thank you, Mark."
jamesiford The Zen of Lewis Carroll: A ..."
"Thanks!"
Bob Evans Considering Universalism: The Secret Teaching of ..."
"Thank you for your kind words about my paper. It was written fifty years ago, ..."
Mark Burstein The Zen of Lewis Carroll: A ..."
Browse Our Archives
Related posts from Monkey Mind

Round and Smooth Like a Pearl
The short passage that I'm sharing today comes from Dōgen’s Extensive Record...
view all Buddhist blogs
What Are Your Thoughts?leave a comment