Noting the birth of the Anglican mystic and writer Evelyn Underhill

The incomparable Evelyn Underhill was born on this day, the 6th of December, 1875, in Wolverhampton, in the West Midlands, England. Her father Sir Arthur Underhill was a successful barrister with a practice in London. Her mother, Lucy, was the daughter of a justice of the peace. An only child, Evelyn was mostly educated at home, and then at King’s College for Women, in London. There she read history and botany.

Her first book featuring light verse about the law was published in 1902. Five years later at 32 she married Hubert Stuart Moore, who like her father was a barrister. Together they lived an upper middle class life, enjoying travel, yachting, and country life. He loved designing metal work and she became an accomplished bookbinder. While they were both Anglican, her heart leaned in the direction of Rome, and especially the mystical traditions of the Latin church. Later she took a deeper interest in Orthodox spirituality, as well.

When the first world war started she went to work for the intelligence service. By the time the second world war began she was a convinced pacifist.

Over the years Evelyn Underhill become a novelist, poet, and most of all a renowned interpreter of the mystical encounter.

Me, I tend to be wary of those who use the word mysticism and the related as too often they are speaking of psychic phenomenon, things in the general area of reading auras or bending spoons. Of course, there are other meanings in that word, and Underhill is the great spokesperson for those other meanings.

Over the years she would be the author of many books. But, no doubt her magnum opus was Mysticism: A Study of the Nature and Development of Man’s Spiritual Consciousness, published in 1911. It is now in public domain and the link is to a complete copy of the book.

The Wikipedia article about it characterizes the “spirit of the book (as) romantic, engaged, and theoretical rather than historical or scientific.” It was also accessible. I know in my own early years casting about for some explanation of the inner life, that this book was enormously helpful. She was for me a powerful counter voice to another important theorist of universal spiritual encounter I read at about the same time, William James. 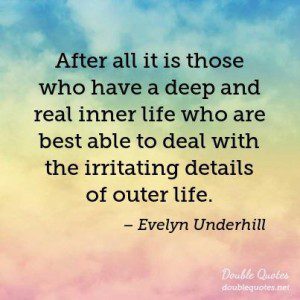 Most importantly, unlike the great psychologist, she seemed to speak from actual experience. As Underhill tried to put what she had experienced together with her observations out of a deep reading into the mystical literature of the West, she offered a typology that continues to make sense to me. It is definitely not mysticism as spoon bending.

“(1) mysticism is practical, not theoretical, (2) mysticism is an entirely spiritual activity, (3) the business and method of mysticism is love, and (4) mysticism entails a definite psychological experience.” Now, I think it all needs unpacking, and she does. I don’t find I agree with everything, nor should I. But, my, she does point in a true direction.

While Underhill was, as I said, deeply enchanted with the Roman church and had intimate friends and spiritual companions from within that tradition, for a number of reasons not least her husband’s antipathy to Rome, Underhill remained within the Anglican communion for her whole life. Personally, I think to the good for many. 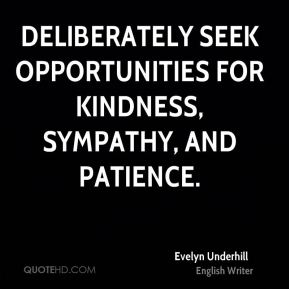 It feels fair to say she brought the range of spirituality, including an appreciation of Eastern forms, but especially the flowering of Western mysticism lived within the Catholic church to the Protestant-identified English community. And to more than one Western Buddhist, I’d add.

The Anglican communion observes the anniversary of her death in June, 1941 as a saint’s feast. I find that totally appropriate.

Evelyn Underhill was a significant figure.

If you’re not familiar with her, I encourage you to explore a little what it is she had to offer. If you are, you might go back and dip into her writings. I believe you will find it prove useful on your own spiritual quest.

December 4, 2022
WHAT DO YOU SAY AFTER YOU RUN OUT OF SERMONS ON LOVE? The Vision of the Liberal Church
Next Post

December 8, 2022 STAR OF THE EAST A Zen Dharma Talk for Rohatsu
Recent Comments
0 | Leave a Comment
"I was always taught (since 1970) that in China, anyway, the five classic poses for ..."
Neva Trejo A Note on the Use of ..."
"A wonderful piece, James. I was recently sitting a week long thing, and two days ..."
Keith Angilly A Note on the Use of ..."
"Thank you, Mark."
jamesiford The Zen of Lewis Carroll: A ..."
"Thanks!"
Bob Evans Considering Universalism: The Secret Teaching of ..."
Browse Our Archives
Related posts from Monkey Mind