By Stephen Ryan Author of “The Madonna Files”

Our Lady at Fatima said: “In the End my Heart will Triumph”

In this decisive time in world  history as Catholics we can find ourselves looking  for signs from Heaven to help us  make some sense of it all.

I find myself asking “Where do I see a devotion to Our Lady’s heart in this world today?” Certainly not among our USA politicians. They profess to love Jesus, but never mention His -Mother.

After I discovered that the Queen of Peace at Medjugorje said “Russia will come to glorify God the most…” I found myself looking to Russia for signs. And there I saw something startling.  There I saw the Russian leader kissing and venerating  Icons of the Virgin Mary.

The second part of the Medjugorje prophecy says: “The west has made civilization progress but without God.”

And as I looked for mor

e answers to explain our troubled times, again it seemed Vladimir Putin had some interesting words to descibe the worlds current condition.

He defends Christianity and condemns anti-Christian West and political correctness

“Without moral values that are rooted in Christianity and other world religions, without rules and moral values which have been formed and been developed over millenia, people will inevitably lose their human dignity and become “brutes. We see that many Euro-Atlantic (The West) states have taken the way where they deny or reject their own roots, including their Christian roots which forms the basis of Western Civilization.

If you have some time please see these videos – They seem almost prophetic.

“Without the Russian Orthodox Christian Church it is impossible to picture either the Russian Government or our culture…acts as a defense of the moral values of Russians…Let it (icon) serve and help the people of Russia.” -President Vladimir Putin.

See also “Russia and Medjugorje – Is the “Great Prophecy” Unfolding? 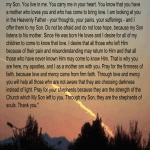 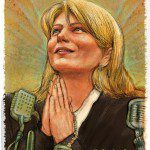 January 21, 2016 The Message of Peace for the World
Recent Comments
0 | Leave a Comment
Browse Our Archives
get the latest updates from
Mystic Post
and the Patheos
Best of Patheos
Channel
POPULAR AT PATHEOS More Voices
1