Five songs into the Dublin band’s sold out concert at the Anaheim Pond the singer began speaking about the head of the Catholic Church, who passed away at the age of 84.

“I met the Holy Father and I was so taken by this showman, even if I didn’t agree with everything he said,” the singer, whose father was Roman Catholic, said to the crowd as the band began playing the intro to new song ‘Miracle Drug’.

Bono carried on speaking about a time six years ago, when he met the church head and gave the Pope his trademark sunglasses.

This is a beautiful tribute to Pope John Paul II

“I said ‘Holy father, do you want a pair of fly shades?’ and he said ‘yes’ and he put them on and he made a face kind of like this.”

After scrunching his face to resemble Pope John Paul II, Bono showed the crowd he still carries with him a token of their meeting.

“He reached out and gave me this sort of crooked cross. It was designed by Michelangelo. They’re my rosaries and I wear them around my neck, and I take them off and put them in my pocket during a rock show, you understand why.”

The band then launched into the full version of ‘Miracle Drug’ which Bono dedicated to “anyone who is sick.” Before the U2’s next song, recent single ‘Sometimes You Can’t Make it On Your Own’, Bono called out the name of the Pope – “John Paul” to the crowd and described him as “as a man who knew the right person to get into heaven.” 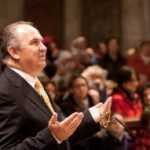 May 23, 2016
When the Queen of Peace Showed Medjugorje Visionary "Happy People in Heaven"
Next Post

May 25, 2016 Mr. Ed Co-Star Alan Young has Died - Here is Clint Eastwood in a Dust Up with Famous Horse Mr. Ed
Recent Comments
0 | Leave a Comment
Browse Our Archives
get the latest from
Mystic Post
Sign up for our newsletter
POPULAR AT PATHEOS More Voices
1