The Problem With Pews 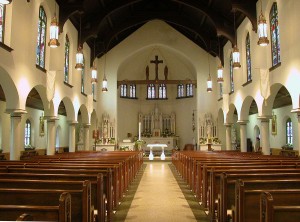 For the first 1,300 + years of the church there was no seating in churches.  (with the exception of stone benches along the back wall for the elderly or infirmed) The Protestant Reformation saw to it that the sermon would now be the primary focus of Christian worship and, well, folks are gonna need to sit for that kind of thing.  So starting in the 16th century and really reving up in the 17th and 18th we saw fixed pews become a norm in Christian churches.

But with pews came with some pretty disturbing practices.  Namely a pay-to-stay system by which wealthy members of the parish would purchase private pews and pew boxes and as long as they kept up their pew rents, had exclusive rights to them.  As a bonus the wealthy were allowed to decorate their pew boxes (that locked!) to suit their tastes with ornate fabrics and cushions.[1] This was reserved seating, not general admission.  As absurd as this now sounds, in many churches we still have a reserved seating system (The Olsons ALWAYS sit in the 3rd pew back on the left).

Pews, especially lovely carved vintage pews, can be really quite beautiful and an efficient way of seating a lot of people at once. No question about it.  But here’s the problem my church is having in finding a new home.  We can’t abide pews.  And it’s more than simply an issue of taste.

See, House for All Sinners and Saints (for the most part) worships in the round, with the altar at the center.  There is not a large space set aside in front for the special people in robes to which everyone faces. Our liturgy (liturgy meaning “the work of the people”) is led by about 15-18 people who decided to pick up the worship booklets when they came in that have jobs written on the front.  So from where they sit in the round, they stand and either say the prayer of the day or the Gospel reading or the benediction or any other number of elements of the liturgy.  The absolution, sermon (usually) and words of institution are mine…the rest is up for grabs.

Even the music at HFASS is created by the people who gather.  We sing everything a cappella.  In glorious 4 part harmony we sing the ancient liturgy and hymns of the church. There is no band or organ.  All the music you hear in the liturgy (and make no mistake, it is glorious…except when it’s awkward, but mostly it’s glorious) comes out of the bodies of the people who show up.

There is a critical “why” to the reason we do things this way that extends far beyond taste.  It’s missional.  In a postmodern context people are increasingly leery of organized religion and it’s attendant obsession with hierarchy.  We have peeked behind the curtain and seen only scared little men. So a shared, communitarian experience of liturgy in which we live as the Priesthood of all Believers is inviting in a way that the formality of the traditional church is not.  (To be clear, this is not the same as saying that we no longer need clergy – I still hold the office of Word and Sacrament but I hold it on behalf of the whole community and with their permission).  This population of urban, postmodern young-ish people have a deep critique of consumer culture and as such are far more interested in being producers than consumers.  This goes for church as well. And being able to worship in the round creates an accountability of presence to each other and a shared experience which allows for the community to create the thing they are experiencing rather than consuming what others have produced for them.

I could go on for a few more pages about the reasons why we do what we do. But the point here is that fixed pews in churches prevent us, and I would argue, many Christian communities that are native to the post-Christian cultural context in which we find ourselves, from using that space.

So, what about the idea of replacing pews with chairs? (if need be, they can be wooden and equally uncomfortable as the pews they replace if that’s important).  Because if everything in a sanctuary is movable then it can always be configured in the really traditional way …But Wait!…here’s the awesome thing….it can also have other uses too!!!  There is nothing wrong with a traditional church set-up.  But when everything is nailed to the floor the use of that beautiful, sacred space is now limited to 2 hours on Sunday mornings.

The House for All Sinners and Saints t-shirts don the church logo on the front: a piece of parchment with a nail at the top ala Martin Luther and the Wittenburg Church door (I have to get my Lutheran-ness in where I can since there are precious few Lutherans at HFASS) and on the back it says “radical Protestants; nailing sh*t to the church door since 1517”.  So maybe the title of this blog post should have been “missional churches; un-nailing shi*t from the church floor since 2012”.

January 4, 2012
What should we do with dying urban churches?
Next Post