Demon Possession and Why I Named My Depression “Francis” 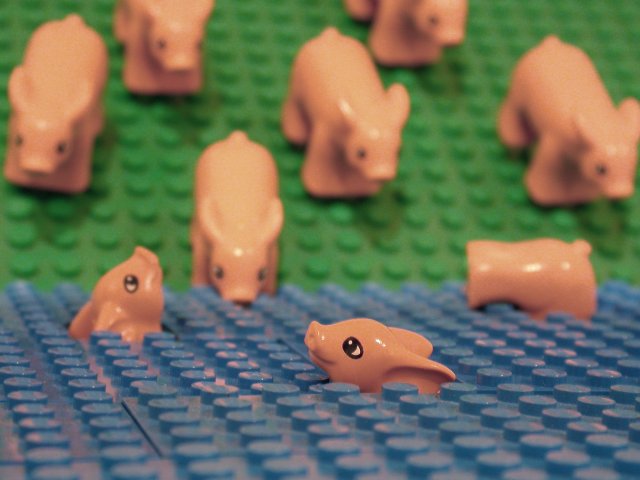 Today we just got to hear that awesomely weird story of when Jesus casts a legion of demons out of a naked dude and into a herd of pigs – pigs who then throw themselves over a cliff and drown in a lake.   It was this story that made my friend heather post the following question on my Facebook Page: “Dear Nadia. How can I get on board with Jesus when so much pork was wasted in the lake?”

Which I guess means that the demon possessed pigs diving off a cliff and drowning in a lake story is one that vegans and bacon lovers can unite around.

I’ve confessed this before but I don’t always know what to do when it comes to talk about demons in the Bible.  Especially when the demons talk and have names and stuff like that. I’m never sure if back then they had the exact same things going on that we do, but they didn’t know about things like epilepsy or mental illness so they just called it all demon possession.  Or if maybe there used to be demons possessing people and sorta like polio and small pox, it’s just not something we have around anymore.  Or if we do actually still have demons and it makes it more understandable and controllable for us if we use medical and scientific terms to describe the things that possess us. I honestly don’t know.

But I do know that many of you, like myself, have suffered from addictions and compulsions and depression – things that have gotten ahold of us, making us do things we don’t want to. Or making you think you love things, or substances or people that are really destructive. So maybe if that, in part, is what having a demon is, maybe if it’s being taken over by something destructive, then possession is less of an anachronism, and more of an epidemic.

And this week as I was feeling squirmy about people who talk of evil spirits and demons like they are beings in and of themselves, I remembered that at one point it felt so much like my depression was a character in my life, that it actually felt really good to just go ahead and give her a name.

I called her Francis, since she moved in around the same time as the birth of Francis Bean, Courtney Love and Curt Cobain’s daughter. But I picture my depression Frances as Courtney Love herself: emaciated in her torn vintage nightgown and smeared lipstick.

Francis first stopped by in my teens and early 20s which was easily written off by my family as me being “moody”. But later, when I seemed to increasingly like the same things Francis liked: booze, emotionally unstable boyfriends, and self-destruction, she finally just moved in, turning my studio apartment into a Wilderness.

She was a terrible roommate. She kept the place filthy and always told me really devastating things about myself.  For some reason, when she lived with me, I was no longer able to do simple things like shop for groceries.  I’d stand for far too long looking at the dairy case, unable to make a decision about yogurt.  She distracted me so much I would forget to eat and then my parents started to worry.  One day my mother Peggy realized that Francis not ever moving out was my problem and suggested I go talk to a nice lady about evicting her.

She’s a bit of a dope fiend, Francis, but it ends up there is one drug that she doesn’t like. It’s called Wellbutrin. Two weeks after I started taking it, the bitch was gone.

But not for good.  Now, 20 years later it still seems like she knows how to find me and sometimes she’ll show up, unannounced and stay a couple days even though I’m now into so many things she hates: sobriety, exercise, community, eating well – and of course, Jesus.

So maybe demons having their own names and saying things out loud to Jesus is not so foreign to me after all.

I mention this because in our Gospel story for today, I think it’s interesting that when the demon possessed man met Jesus at the boat, his demons were  scared and it was them and not the man who spoke up saying “what have you to do with me, Jesus son of the Most High God?”

It’s weird, but out of all the characters in the Gospels who encounter Jesus, the ones who most reliably know who he is are not the religious authorities or even Jesus own disciples.  They are the demons. The demons always recognize Jesus’ authority.  And the demons are afraid.

So, this week I started wondering: Were I in the throws of another roommate situation with my depression Francis and Jesus rowed up in his boat and I go to meet him and Francis said “What have you to do with me Jesus, son of the Most High God?” Would Jesus say “oh, me?  I have nothing to do with you” ?  Of course not.

I think our demons totally recognize Jesus right out of the boat and our demons are afraid of him.  Which is why they try to get us to stay away from people who may remind us how loved we are. Our demons want nothing to do with the love of God in Christ Jesus and so they try to isolate us and tell us that we are not worthy to be called children of God. And these lies are simply things that Jesus does not abide.

Maybe the demon of anger knows to steer clear of the Gospel, lest you end up forgiving some jack ass who you really want to punch in the throat.  Maybe your demon of inertia knows to avoid of Jesus lest it be cast off a cliff and you have to start showing up in life.  Maybe your demon of compulsive eating knows to not listen to Jesus lest it find itself in a lake and you clothed and fully in your body and sitting at Jesus feet.  Maybe your demon of always always always having to prove yourself fears Jesus since if you listen to Jesus and not that demon you may start really believing that you are already good enough and then you’ll have to stop over-functioning.

The description of the Geresene demoniac was a description of someone who was completely isolated – who was out of control and alone and in pain.  And if being out of control and alone and in pain was what the demon wanted, then I think it makes complete sense that the demon feared Jesus.  Because in these healing texts, Jesus does not just cure people’s diseases and cast our their demons and then says Mission Accomplished…, he’s always after something more than that…because the healing is never fully accomplished until there is a restoration to community. People are healed of disease and he tells the folks just standing around watching to go get them something to eat. The widow’s son is raised from the dead and he gives him back to his mother. And here the man healed of demons is told to stay with his people and speak of what God has done. In the Jesus business, community is always a part of healing.

It’s interesting to me that when the townspeople saw that the man no longer had demons and was clothed and in his right mind and sitting at Jesus’ feet, they did not exactly celebrate this – instead became possessed by their own demon.  Did you notice that? The text tells us that seeing this, they were ceased with fear and begged Jesus to leave their town.  Man, seen that kind of thing before, haven’t you? Like if your family seems distant when suddenly you stop hating yourself, or when your friends stopped calling when you sobered up or when I resent my friend who suddenly refuses to gossip with me anymore.  Life and life abundant just isn’t what everyone is seeking…but it’s always what God is offering.

So, in conclusion, are demons forces that are totally external to us who seek to defy God? Are they just the shadow side of our own souls? Are they social constructions from a pre-modern era?

Bottom line: Who cares.  I don’t think demons are something human reason can solve. Or that human faith can resolve.

I just know that demons, whether they be addictions or evil spirits, are not what Jesus wants for us.  Since basically every time he encountered them he told them to piss off.  And here’s the thing: the authority to do just this –  the authority to face what tell us lies, to face what keeps us shackled, to face what keeps us out of control, alone and in pain and tell it in the name of Jesus to piss off is an authority that has been given to us all in baptism.  Baptism is as radical as exorcism. So remember our reading from Galatians: For as many of you who were baptized in Christ have clothed yourselves with Christ. There is no longer Jew nor Greek, slave nor free, male nor female (gay nor straight)

Which means, you dear people of God are clothed with the one whom demons fear. Claim it. And tell those demons to piss off. In the name of Jesus, Amen.

June 12, 2013
Sermon (prayer, actually) on Jesus Loving Us So Much He Wants to Throw Up
Next Post

July 1, 2013 A Eulogy of Sorts for an Amazing Woman who 20 Years Ago Saved My Ass
Recent Comments
0 | Leave a Comment
"Grief and loss are really tough things to deal with. Sermons on this matter from ..."
Don Davies An All Saints Sermon on Grief ..."
"Ive read the bible. Its the #1 reason I am not Christian. The behavior of ..."
JD The Denver Statement
"To trust in God rather than try to analyze His motives (meaning, sit in judgment ..."
Eric Rachut The Denver Statement
"You tell me."
JD The Denver Statement
Browse Our Archives
Related posts from Nadia Bolz-Weber