Sermon (prayer, actually) on Jesus Loving Us So Much He Wants to Throw Up

Sermon (prayer, actually) on Jesus Loving Us So Much He Wants to Throw Up June 12, 2013 Nadia Bolz Weber 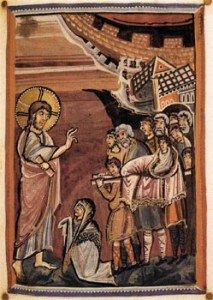 A few years ago I wrote a book about the experience of watching 24 consecutive hours of bad Christian television.  My friends and family signed up for an hour each to watch along with me. The whole thing was insane but things got especially crazy around 1a when a show called the Power Team was on. Now, the Power Team are a bunch of enormous steroid muscled men who hold really loud Christian rallies in which they tear phone books in two and break 2x4s over their heads by the power of the Holy Spirit. And they talk a lot about what “the Lord” had done for them. It’s impressive stuff.  Anyway, so our own Andie Lyons was watching with me along with my friend Jerry. And the three of us watched in stunned silence for a moment trying to understand what it was we were seeing at which point Andie finally said “so wait, basically they break stuff for the Lord?” and I answered yes and then Jerry said “big deal, I break stuff all the time” to which Andie asked “but is it for the Lord?” and Jerry said “well, it is now!”.

Honestly the only reason I told you this story is by way of saying that I’m not a fan of the over-use of the term “the Lord”. Like when people say “I just love the Lord” I just never really know what that means. The way it’s casually thrown around makes me uncomfortable especially after Harry Potter since Voldemort is called the Dark Lord. I just, I don’t know, I’m not saying it’s wrong, I’m just saying that for whatever reason, I can’t handle it.

So this week when I could not figure out what to preach about I called my friend Kae and she reminded me that this story in Luke that we just heard,  of the raising of the widow’s son, is the first time in the Gospel of Luke that Jesus is called “the Lord”.  See, Luke does not just throw the term around and there was a radical reason he finally pulled it out in this story.  Because in the context in which Luke lived the word Lord DID mean something. It used for Caesars and all that Caesars stood for.  Those who were called Lord were to be feared and obeyed and they would smite you just as soon as look at you.  Lords were capricious and dictatorial and arbitrary and made people’s lives miserable.  In other words, Lords were like the God so many of you were taught to fear.

But Luke tells us of another God entirely.  Not God as Caesar, but God as baby, God as friend, God as Jesus  – the one who kisses sinners and touches the unclean.  And as Luke so masterfully tells us of this Jesus he waits to call Jesus Lord until this story.  Jesus and his crowd are entering the city gate as the widow and her crowd are leaving to bury her only child. And Jesus sees her, as Jesus often see those from whom we turn our gaze. He sees her and the text says he had compassion on her but “compassion” is far too polite a word for this. In the Greek it’s far more visceral a thing than compassion. It’s more like his guts churned. His insides lurched at the sight of such loneliness as a widow grieving the death of her only child in the middle of a large crowd.  Luke makes it clear: Jesus is not the Lord of Empire, Jesus is The Lord of Compassion. And in this story Jesus reached out and defiled himself as he so often did, by touching and loving and resurrecting that which is considered unclean. He saw and had compassion and reached out and touched and again the dead were raised. He said Young man rise up. And the man rose and began to speak and Jesus gave him to his mother.

So beautiful. You’d think a sermon on this beautiful of a story about Jesus would write itself. Yet none came. I don’t know why.  Maybe I’ve had a decent run but now it’s over.  That happens some time. This week I thought that perhaps you should put your preacher on a bier and march me out of the city for burial. Maybe then Jesus might see us and reach out, touch, and say arise and give us one to another.

So, it’s true – I was not able to write a sermon. Not really.  But I was able to write a prayer for us. And sometimes that’s just better anyhow. It’s more petition than proclamation but here it is:

Lord of compassion I pray,

As you did in Nain, enter our city gates. Enter into the somber roads down which our hearses drive and the glad streets where children run. Enter the parks where the junkies shoot up and the yuppies listen to jazz.  Walk uninvited into starter mansions and public housing and dorms and cheap motel rooms on Colfax that charge by the hour. Stroll into the cool-air freezer section where the pregnant women escape the heat and the bus stop benches where the weary wait. Step into the space between the city worker who wrote me a parking ticket and my mis-guided anger. Enter our city gates, Lord of Compassion as you did the city of Nain. And bless.

Bless the things we think are dead.  Bless that which we have already begun to carry out of town to bury. Bless our rocky marriages and our college age kids who smoke too much pot. Bless the person at work who we love to hate. Bless the young adult who wonders if they are too young to really be an alcoholic and the 6o year old woman who’s had too much work done. Bless public schools lunch ladies and the guy who stole my kid’s bike. Bless the one who has no one. Bless what we call insignificant and which you call magnificent. Bless it all Lord of Compassion and love what only you can love: the ugly, and abandoned and unsanitary in the wash of humanity upon which you have nothing but a gleaming compassion.

Lord of Compassion who saw the Widow of Nain, we thank you for seeing us.  Seeing our loneliness and our bravery.  Seeing the times we can’t say what we need to.  Seeing the ones who suffer in silence.  Seeing the moments when we are more than we thought we could be. Seeing what no one else can or will. We praise you for seeing as beautiful what we call ugly and that in your compassion you wipe away all tears.

And when again Lord of Compassion, you have raised the dead…when again you have made whole that which is broken, when again you have ripped out my heart of stone and replaced it with a heart of flesh, when again you have reached into the graves we dig ourselves and loved us back to life…help us, like the young man of Nain to sit up and speak.  Give us the words that are not empty praise or platitudes of piety, but give us strong words, as real as the very soil from which you raised us.

Give us the words to speak of you. And then, as you did the son to his mother, give us one to another.  That when we speak others may hear and know that you are without question and without end the Lord of all Compassion. AMEN.

June 6, 2013
The Authority of Apology (my Honors Convocation Address at Iliff School of Theology)
Next Post

God Is Not a "He". The...
Thoughts of a Modern Celtic Wanderer
Related posts from Nadia Bolz-Weber