Sermon on Mary and Martha

Just to get it out there, this story about Mary and Martha has always irritated me, because I think Martha is awesome, and she’s always made out to be a busy-body and a whiner.

See, Jesus is welcomed into the home of Mary and Martha and the thing to understand is that Jesus didn’t exactly travel alone.  Dude had an entourage – so to welcome Jesus is to welcome who Jesus brings in with him.  And to extend hospitality to that many people, takes a lot of work, so Martha becomes understandably overwhelmed by her tasks and tries to get Jesus to talk her sister Mary into helping her, since Mary up until this point has only been sitting at Jesus’ feet listening. Jesus tells Martha that Mary has chosen the better part and it will not be taken from her.

Now, you guys know I’m not one to lay on the guilt trip – I never really mastered that technique employed by clergy since time in memorial – so when I tell you that at our last leadership meeting we found ourselves once again trying to figure out how to get the monthly jobs covered I am not saying that to shame anyone except myself – because, in the end, I honestly got a little bit snarky and slightly self-righteous (even for me) and said the following of which I am not proud: I said, “It’s like I really want to say to folks that every week they show up here at 5 after 5 SOMEONE has set the chair up that they get to sit in, and SOMEONE has baked the bread for the Eucharist they receive, and SOMEONE has greeted them at the door and handed them a bulletin and when they leave right after the dismissal, SOMEONE will sweep up and wipe down the counter and that maybe it’s their turn to be that SOMEONE for others”

And yes, I spent several days this week distracted by how much work it is to keep this community running and how Martha gets a bad rap, and that all felt really satisfying until Saturday when I went to my 12 step meeting…the one I’ve gone to for 15 years and I arrived 5 minutes late like I so often do. I took my seat on a folding chair and sipped at the light brown coffee in my hand before realizing: oh dang it.  SOMEONE had set up all these chairs and SOMEONE had made the bad coffee and when I leave right after the Lord’s prayer, SOMEONE will clean it all up and in a decade and a half that SOMEONE has never been me. Wa-wa.

Here’s a small example – when I am sitting in the turn lane waiting for a green arrow…I take it upon myself to consider the people behind me and to leave as short a distance as safely possible between me and the car in front so as many of my fellows as possible can also get through the turn signal. Inevitably, when someone leisurely leaves 4 car lengths between them and the car turning  in front of them allowing only 2 cars to get through a green arrow instead of 6, I assume that they are not a team player, only out for themselves and either just selfish or lazy. Wow. That’s a lot of judgment on the personhood of someone based solely on how quickly they turn on green.

But that thing we do where we judge the actions of others based on how we ourselves move through the world – that is a distraction from the MAIN THING.

If the reason you help set up chairs is because you value this community and are grateful that others have set up chairs for you, that does not mean that those who don’t set up chairs do so because they don’t value community or because they are ungrateful to others.  And the more we live our lives in these kinds of judgments about the actions of others, the more distracted we are from the better part – from the MAIN THING which will not be taken from us.

When we think the main thing is who does what and why, when you think the main thing is whatever you get out of this, or the main thing is that your friends are here, it all is just busyness and distraction and all of it will eventually be taken away. The main thing – the thing that will not be taken away and that we (myself included) so easily forget is our sacred story.   It’s a simple story, really. Even as it is unfathomable in it’s beauty…So here it is again…since I too often forget – there is a God who created us and all that is, this same God spoke through prophets and poets, claimed a people to be God’s own and freed them from the shackles of slavery. This same God led those people through the wilderness to a land of milk and honey, and told them to always welcome the stranger and protect the foreigner so that they could remember where they came from and what God had done for them. Then in the fullness of time, and to draw ALL people to himself, God came and broke our hearts like only a baby could do and made God’s home in the womb of a fierce young woman as though God was saying, from now on this is how I want to be known. And as Jesus God kissed lepers and befriended prostitutes and baffled authority. Jesus ate with all the wrong people and on the night before he died held up bread and told us to do the same thing and he promised us so much: that he would be with us, that forgiveness is real, that we are God’s, that people matter and that grilled fish makes an awesome breakfast.  And from the tree on which Jesus hung he pronounced judgment on us all. “Forgive them Father, they know not what they are doing”.

We never do, really, we never seem to know what we are doing and sometimes we think the Bible is going to solve that for us…that a story like Jesus’ visit with Martha and Mary is going to give us a clear moral lesson so we can know what we are doing. And then we think we’ve got it down and then we begin to judge the actions of others and the moment we do this we’ve once again lost the plot.

So maybe choosing the better part isn’t about choosing between action and contemplation, maybe it isn’t about working or sitting at Jesus feet, since the Christian life has always been a combination of the two. Maybe choosing the better part is not judging the actions of other through the lens of your own personality. Because when we do so it is just a distraction from the Main thing – and this story around which we gather…this MAIN THING, can never be taken away because it is always forming who you are and like water on rock, it slowly and sometimes imperceptibly shapes us into the glory of God.

That’s why we come here.  It’s not to see our friends or to take advantage of free popsicles, it’s to remember our story. And the story of God and God’s people will stand. And unlike so much else in life, It will not be taken away.

August 5, 2013
Sermon on Beanie Babies, Scarcity and Vanity.
Next Post 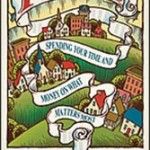