Sermon for All Saints Sunday: Small Acts of Love 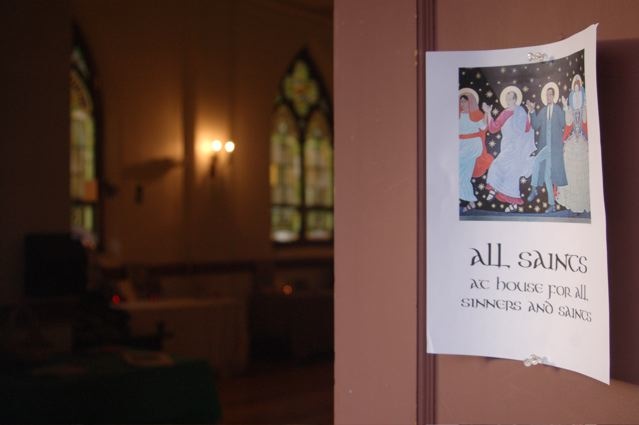 A stanza From the great hymn For All The Saints:

So, I’m a sucker for a good saint and many of you might not know this but when this church was starting I had a stack of saint card – saint cards are like trading card for Catholic saints, their picture on the front, and their stats and like, spiritual powers listed on the back…well I had a stack of these but they were all of the same saint – St Dymphna who’s my favorite. Not exactly the most famous of the saints but there you go.  Saint Dymphna was the daughter of a pagan Irish king and his Christian wife in the 7th century. Sadly, she was murdered by her father. But before her death she is said to of founded a home for the ill and many crazy people reportedly became a lot less crazy around her.

That is to say, she just really seemed like our kind of saint.

Today is a day set aside in the church year to remember the saints.  But not just the ones who have trading cards since it is technically All Saints Sunday and not just Some Saints Sunday. To be clear, this isn’t like a cult of saints or anything…we don’t need special saints to intercede for us because God listens to them more since they were just basically better Christians than we are.  What we celebrate when we celebrate All Saints is not the superhuman faith and power of a select few but is God’s ability to use flawed people to do divine things. We celebrate all on whom God has acted in baptism, sealing them, as Ephesians says, with the mark of the promised Holy Spirit. We celebrate the fact that God creates faith in God’s people, and those people through ordinary acts of love, bring the Kingdom of Heaven closer to Earth. We celebrate that we have, in all who’ve gone before us, what St Paul calls such a great cloud of witnesses and that the faithful departed are as much the body of Christ as we are.

It is quite a thing, really.  That we are connected to so many. Connected to so much faith. So many stories. So much divine love. Especially in this day and age of alienation and trying to find community and belonging in smaller and smaller ways. I mean, I may think that the basis of me being connected to other people is in having theology or political beliefs or denominational affiliation or neighborhood or musical taste or Facebook groups in common.  But none of that is what connects me to the Body of Christ. What connects me to the body of Christ is not my piety or good works or theological beliefs.  It’s God. A God who gathers up all of God’s children into the church eternal.

So, today let us remember all the deeply faithful and deeply flawed saints of God’s church through whom the glory of God has been revealed is being revealed and will be revealed.  Let us remember Mary Magdalena and Peter the fisherman and the glorious disciples.  Let us remember St Frances and Mother Teresa and Martin Luther King Jr. Let us remember Lindsey’s mom, and Moose’s brother and my friend Suzanne who took me in when I was messed up kid trying to get sober. Today let us thank God for gathering so many into the church eternal, some of whom still light our own paths.

Many of you have come here today to honor someone you have loved who has died. Your hearts are heavy with the loss of someone dear. Many of us have our own beloved dead to remember this day. People who we’d frankly rather still have here in this room as a living person and not as a photo on a white table at church the first Sunday of November. We’d rather be standing behind them in line for communion than adding them to the litany of saints.

Some of you know that this last May Julie asked us to pray for friends of hers who had lost their son Drake to suicide. Drake was 12. He was an animated child who was different from other boys.  He was on the state championship cheerleading squad and loved weaving, knitting or crocheting scarves for his friends.  And for all of this and more he was bullied mercilessly. Drake, a baptized, beloved and beautiful child of God is gone but here, today we will speak his name. We will speak his name with the names of others who have departed this world since the last All Saints – expectedly, unexpectedly, peacefully, violently. And all of them now taken into the embrace of the God from whom they came in the first place.

When I met Julie for coffee a few weeks ago and she spoke of how much she’s understandably struggling to make sense of Drake’s death, I told her as I have so many of you, that I don’t have any easy answers. And that there is seldom an answer to the question of why there is such senseless suffering.  But there is meaning to be found in it.  And for me that meaning is connected to being part of this mystic body of Christ because it means that death is never the final word because in both life and death we, like Drake are very much connected to God and to one another. The letter to the Ephesians we heard earlier calls this the inheritance of the saints, That God somehow gathers us all up into the divine love of Christ and makes us a body both now and in the life to come. That even those whose names are eventually forgotten are always and forever held in the light of God in glory. Because while death is a wrenching painful reality to us, it’s meaningless to God.

Not that God is impervious to the pain of death, mind you – after all,

Jesus had real friends who died, and he stood outside the tomb of Lazarus and wept. And then, of course, he raised Lazarus from the grave – as though before Jesus was to defeat death for good he needed to just gave it a really good slap in the face first.   God in Jesus was so moved by compassion and love for those who others rejected, those like young Drake, that his hand was ever extended to them, a God who, in Jesus was so full of grace that he went to a cross we built for him, a God who in Jesus descended to the dead as though to say to us “even here I will find you and not let go” because death has no sting – death is rendered meaningless to a God of resurrection.  And lest we forget, it is a God of resurrection who we worship.

At that coffee with Julie I said I didn’t have answers but I did know that All Saints Sunday was coming up and we could have a little shrine for Drake…. Yet one more Saint that has gone before us with whom we are still inextricably, united in the body of Christ.

So what can we do but also give thanks for this table we are about to gather around – a foretaste of the heavenly banquet around which the saints are already gathered.  We give thanks that around this table we are tied to the whole communion of saints – united with all who have ever received bread and wine and told it was Jesus and it was for them.  We are joined here with angels and arch angels cherubim and seraphim  – we are joined with the church on earth and the church in heaven and all who have called on the name of God. And we are connected to God.

I saw Julie again a couple days ago and in her bag was a picture of Drake and also a scarf he had woven for her. She asked if I could wear it as my stole when we gather around the table today and remind each other of the night before Jesus defeated death. Yes, of course I will and it will be my honor.

So for this we are also giving thanks, that saintly acts are always just really simple acts of love. And that we give thanks for all those who have come before us handing on the faith and being used by God for simple acts of love. Building homes where the crazy can be less crazy, giving food to those who hunger, taking in a kid trying to get sober, changing a child’s diaper, weaving a scarf for someone you love.

October 28, 2013
Reformation Day Sermon on How Jesus' Teachings Should Come With a Warning Label
Next Post

November 27, 2013 Sermon: Losers, Amish and the Reign of Christ
Recent Comments
0 | Leave a Comment
"Grief and loss are really tough things to deal with. Sermons on this matter from ..."
Don Davies An All Saints Sermon on Grief ..."
"Ive read the bible. Its the #1 reason I am not Christian. The behavior of ..."
JD The Denver Statement
"To trust in God rather than try to analyze His motives (meaning, sit in judgment ..."
Eric Rachut The Denver Statement
"You tell me."
JD The Denver Statement
Browse Our Archives
Related posts from Nadia Bolz-Weber