Sermon: Losers, Amish and the Reign of Christ

33When they came to the place that is called The Skull, they crucified Jesus there with the criminals, one on his right and one on his left. [[ 34Then Jesus said, “Father, forgive them; for they do not know what they are doing.”]] And they cast lots to divide his clothing. 35And the people stood by, watching; but the leaders scoffed at him, saying, “He saved others; let him save himself if he is the Messiah of God, his chosen one!” 36The soldiers also mocked him, coming up and offering him sour wine, 37and saying, “If you are the King of the Jews, save yourself!” 38There was also an inscription over him, “This is the King of the Jews.”
39One of the criminals who were hanged there kept deriding him and saying, “Are you not the Messiah? Save yourself and us!” 40But the other rebuked him, saying, “Do you not fear God, since you are under the same sentence of condemnation? 41And we indeed have been condemned justly, for we are getting what we deserve for our deeds, but this man has done nothing wrong.” 42Then he said, “Jesus, remember me when you come into your kingdom.” 43He replied, “Truly I tell you, today you will be with me in Paradise.” -Luke 23:33-43

Two and half years ago lost the worship space we had been using and I felt we had been thrown under the bus by people who were supposed to have our back.  It wasn’t right and, on principle, I was not about to drop my fists.  I was on the phone one day with my friend Sara, going off on a full-on Nadia-style rant detailing all of this.  Finally Sara said to me: “Nadia, you are actually right about all of it” I thought to myself “Thank you. Exactly.  That’s why I am fighting” Except then without skipping a beat she added “You are right about all of it AND…it doesn’t matter” Wait. What? Are you kidding me? If you are right about something, then what else CAN matter?

That was before I realized all the ways I had participated in creating the situation we found ourselves in.

I tell this story today, because knowing that our reading for today, for Reign of Christ Sunday, was going to be the crucifixion text, I’ve been obsessed all week with the fact that three times in this text during his crucifixion, people say to Jesus, “save yourself”.

Seriously Jesus, you healed the sick and raised the dead and performed wonders and miracles, so we know you have it in you…for God’s sake man, save yourself. If you are the son of God, if you are the messiah, then why on Earth are you allowing yourself to be humiliated like this. Make it stop.  You’re embarrassing us.  And why are you being such a loser, anyway?

See, we humans tend to be obsessed with winners and losers, insiders and outsiders, good people and bad people. And we can only win if someone else loses. This is the game. Some win, some lose. It’s everywhere.

And that win-lose, good-bad, insider-outsider thing we are all engaged in?…I know this is a little pop-psychology-y but think that it is somehow linked to our own fear of death and loss and fear that we are not loved.  So we fight, and compete and argue based on principle. Or we send passive aggressive emails when we feel wronged.  Or we talk trash about someone who has hurt us.  All of which I have either done or considered doing in just in the past week alone, but none of which will ever fend off loss or convince me I am worth anything in the ways I think they will in the moment.

Which is where Jesus enters the story…annouyingly.

In our win-lose way of understanding things it would have made a lot more sense for Jesus to have come and be a superhero, kicking ass and taking names. Showing everyone how strong God is by winning at our game.

Instead, at the cross we see that Jesus came and showed us how strong God is by voluntarily losing at our game.

No wonder people kept yelling “save yourself!” If you are God, then have some self-respect. Because that’s what we would do. But that’s the thing about God.  God doesn’t seem nearly as interested in self-preservation as we are.  God isn’t self-preserving, God is, by nature, self-giving…not in the way that keeps abused women abused.  But in the way that loves the abused and the abuser. Which is to say, God is self-giving in ways that don’t seem to make a lot of sense to our ideas of win-lose, right-wrong, insider-outsider.

And that’s the reign of Christ.

He’d been trying to tell us this the whole time: by having a mom without status, and there being no room in the Inn for his birth, and by gathering around him, not a team of all-stars, but a motley crew of losers and then pissing THEM off by also insisting on eating with the winners anyway.  He tried to teach us maddening things – things that de-stabilize our systems of trying to get-over on people by saying that the first shall be last and the last shall be first.  If you want to find your life then lose it. The greatest among you must become servants. If someone slaps you offer them the other cheek as well. If someone asks for your coat, give them your shirt too.  Why? Because like being right about everything… It doesn’t matter.  All of this losing can happen and we will still be ok.

I think this imago dei, this image of God, creates in us a longing for what is real and beautiful and redemptive. And even as we are drawn to self-preservation and the game of winners and losers, there is something in us that always knows it’s all a lie.

I think this is why, despite the countless stories of revenge that could be told, that story from 2006 of the shooting at an Amish school continues to be told and continues to pull at that place inside all of us, the imago dei, reign of Christ, kingdom of heaven place that longs for the Gospel. On October 2, 2006, Charles Roberts walked into a one-room Amish school house and shot 10 young girls before taking his own life. The response of the Amish community was not one of self-preservation, saving themselves, revenge, or winning in any way.  The response was one of pure Gospel and this is why it is still told to this day. We recognize the real thing when we see it.

Amish community members affected by the shooting offered forgiveness.  They refused to hate. Instead they visited and comforted the shooter’s widow.  Reportedly, “one Amish man held the shooters sobbing father in his arms, for as long as an hour, to comfort him”[1].

I may feed my desire to be right, to get over on others, to make people who have harmed me pay for what they’ve done by narcotically consuming movies, TV shows and video games that indulge my revenge fantasies. But it’s an empty high and then I crash. But the reign of Christ is significantly quieter than a Jean Claude Van Dam movie.  Jesus of Nazareth kept saying the kingdom of God is like things that are hidden and small and easily missed. He also said that the kingdom of God is within you. Quiet, hidden, small, easily missed.  But unmistakably THERE. There within the image of God from which you were created, is the kingdom of heaven, wanting to be known, wanting to be expressed, wanting to be lived and absolutely lighting up when it hears the real thing. Within it is your beauty, your value, your dignity. And it has absolutely nothing to do with being right, or making your point, or saving yourself or winning or losing.

Catholic theologian James Alison puts it this way – he claims that at the cross it is as if God is saying to us:

“I’ll occupy that space of loserdom to show you that I’m not out to get you, that I really do like you. Then you need no longer engage in that awful business of making yourselves good over against, or by comparison with each other. Instead you can relax about being good, and as you relax you will find yourselves becoming something much better, much richer in humanity than you can possibly imagine.”[2]

And I have to believe that the Image of God within us, that source of our worth and dignity and lovability from where our longing for truth and beauty comes – is nourished and honored every time we come here and once again hear that we are loved like crazy by this crucified God who doesn’t mind losing.

Last week one of you, who was raised in an abusive home with a fairly crazy mother, wrote me an email to say that something in you had changed as a result of 2 years of hearing in this church of the unconditional love and grace of a God who wants to be known. Your mom had emailed something a little crazy to you about her life and had said that strangely she feels God’s presence and love right now.  And you told me that for years you had tried to be a good Christian and make yourself love and forgive your mother.  But inevitably the past you would have rolled your eyes and resented what your mother had just written you and you would have tried to make a point about how insane she is.  But instead, and before you even realized what was happening your first thought this week was “of course God is present to and loving her”  You had begun to relax and believe it so much for yourself that even believed it of your abusing mother.

This, brothers and sister, this is the reign of Christ.  It is within you. And the true source of your dignity, worth and lovability… and nothing else matters. Not really. So relax and find yourselves becoming something much richer in humanity than you can possibly imagine. Amen. 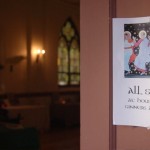 November 4, 2013
Sermon for All Saints Sunday: Small Acts of Love
Next Post

December 10, 2013 And a Soul Felt Its Worth: a Sermon on an Overlooked Miracle
Recent Comments
0 | Leave a Comment
"Grief and loss are really tough things to deal with. Sermons on this matter from ..."
Don Davies An All Saints Sermon on Grief ..."
"Ive read the bible. Its the #1 reason I am not Christian. The behavior of ..."
JD The Denver Statement
"To trust in God rather than try to analyze His motives (meaning, sit in judgment ..."
Eric Rachut The Denver Statement
"You tell me."
JD The Denver Statement
Browse Our Archives
Related posts from Nadia Bolz-Weber