Sermon on that special class of salty, light-bearing people to whom Jesus preaches 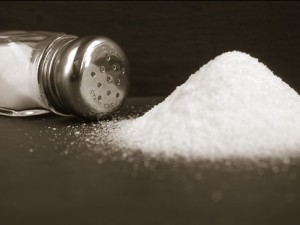 If you are able to hear that you are the salt of the earth reading from today and NOT have a song from the musical Godspell worm through your head, then more power to ya.  But I am not that mentally strong and I have been reading this text over and over all week, ergo I have had “let your light so shine before men” stuck in my head for about 5 days now.

Surely those who Jesus would call the salt of the earth and the light of the world are a superior class of people nothing like myself.  This is what I told myself this week as I was trying to figure out what I related to in this text. So I went into the Sermon on the Mount in the Gospel of Matthew to try and discover what I could about who this special class of awesome, salty, light bearing people were.

Ok, this is when Pastor Nadia offers another nerdy installment of her history of the Bible lessons: this week’s topic – chapters and verses.

Now, while having the Bible broken into chapters and verses makes it easier to find things and reference them. The Bible didn’t like, come with them… there were no chapter numbers in the Bible until the 13th century and no verse numbers until the 16th century. God did not add the chapters. Jesus never like sat down and divided his sermons into verses.  So you totally have permission to ignore chapters and verses – those separations were added later. I mention this because I defiantly ignored the arbitrary separation between the 4th and 5th chapters of Matthew this week and I’m glad I did.  Because honestly, some monk in the 13th century who decided where Matthew chapter 4 ended, is definitely not the boss of me.

The last verses of chapter 4 say this: Jesus fame spread throughout all Syria, and they brought to him all the sick, those who were afflicted with various diseases and pains, demoniacs, epileptics, and paralytics, and he cured them.  great crowds followed him from a bunch of places I can’t pronounce. (which is where chapter 4 ends which is stupid because the first verse of chapter 5 says) When Jesus saw the crowds, (when he saw the demoniacs and epileptics and people in pain) he went up the mountain; and after he sat down, his disciples came to him. 2Then he began to speak, and taught them, saying:(now, these are the beatitudes we heard last week)

See, here’s why sometimes it’s good to ignore the chapter and verse separations.  Because it’s so easy for us to default to hearing Jesus’ sermon on the mount as pure exhortation.  As though he is giving us a list of things we should try and be so we can be blessed – be meeker, be poorer, and mournier a little more and you will meet the conditions of earning Jesus’ blessing.  But the thing is, it’s hard to imagine Jesus exhorting a crowd of demoniacs and epileptics to be meeker.  He wasn’t telling them what to try and become.  He was telling them you are blessed and you are the salt of the earth and the light of the world.  This was his special class of people to whom he preached.

I mean, perhaps there were people in the crowd who totally had their crap together. People who had solid relationships and had paid off their student loans and always backed up their hard drives.  People who had nothing they felt shame about and who didn’t have terrible secrets and knew exactly what they were doing.  Of course that is possible those people were in the croud, it’s just, that’s not who we are told were coming to Jesus.

The ones we are told were coming to Jesus, the ones presumably to whom he was preaching, were described as the sick, those who were in pain, who fought with demons, who were broken and addicted and late on their back taxes.  Who has more than one ex-wife, and who watch too much Netflix and think that maybe a little heroin might be a good idea. In other words, they were people standing in the need of God. And standing in the need of God is standing in the way of blessedness in a way that having it all together never is.

Yesterday at my office hours someone talked about how they had given up on church because church seemed to be a place that only well people went. People who were doing just great and totally had it all together. And if that is not who you are then you just pretend for as long as you can.

What’s weird about that is that it’s clearly not who came to Jesus when Jesus was walking the earth.  It’s just who we at some point decided Jesus wanted us to be after he’d left.

These people, the wretched ones left behind in the last verses of chapter 4, they follow Jesus, in a way that the least, the last, the lost and the lonely have followed him ever since, and to them he gives a blessing.  The poor, those who mourn and are meek. Jesus gives them a blessing. You are blessed. He says, And then right after that, he says that they are salt and light.

To the broken and hurting he gives a blessing and then he says that they are of the Earth, that they are earth and breath of God.  Like in Genesis 2:7 God breathed into the dust of the Earth and created humanity. To the flawed and sick and crippled he says Your bodies are created wonders filled with light. The salt in your tears and in your sweat is a reminder that you were created from dust and the very breath of God.

I thought that to be the light of the world, to let your light so shine before men, you have to be whole, be strong, be perfect. That special class of people I’ll never belong to.

But perhaps this is when we best listen to the words of the prophet Leonard Cohen “ring the bells that still can ring, forget your perfect offering.

So perhaps those cracks…made from bad choices, from anxiety and depression, from addiction, from struggle and remorse.  Maybe those cracks are what let’s the light of God’s love in.

And maybe those same cracks also how the light gets out.

We perhaps should not miss the fact that Jesus does not say “here are the conditions you must meet to be the salt of the Earth.” He does not say here are the standards of wholeness you must fulfill in order to be light for the world.  He looks out into the crowd of people in pain, people who have been broken open – those cracks that let in and let out the Light, who have the salt of sweat and tears on their broken bodies, and says you ARE salt. You. You are light. You have that of God within you the God whose light scatters the darkness. Your imperfect and beautiful bodies are made of chemicals with holiness shining in it…you are made of dust and the very breath of God.

In other words, you are a broken jerk and Jesus trusts you. Don’t wait until you feel as though you have met the conditions of being holy. Trust that Jesus knows what he is doing. And that you already are salt and light and love and grace. Don’t try and be it. Know that you already are. And then, for the love of God, take that seriously. The world needs it.