The Worst: A Sermon About Baltimore, Eunuchs, Evangelical Conferences and How Irritating The Holy Spirit Can Be 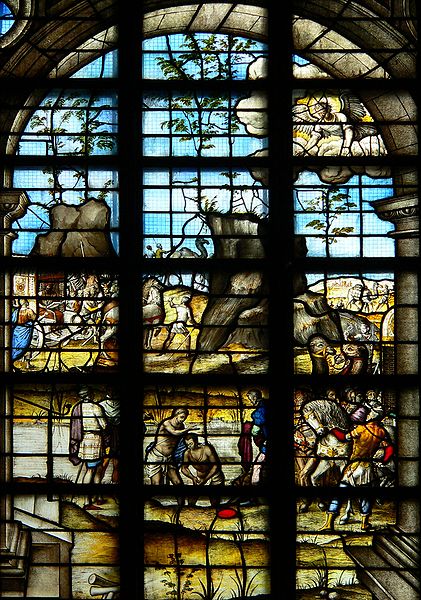 A week in the life of your preacher.

Monday: Freddie Grey, having died as a result of a traumatic spine injury while in police custody, was laid to rest at a service at New Shiloh Baptist Church.

Tuesday: we watch images of another American city go up in flames and outrage. Depending what your view is, either the Police are The Worst, or the Protestors are The Worst.

Wednesday: Slate.com posts an article about a conference that is like the Evangelical Christian version of TED talks. The conference planners seemed a bit self-satisfied in believing they were hosting a difficult conversation about same-sex marriage and “the issue of homosexuality” when the reality was that the one gay Christian who they “allowed” to speak, namely Matthew Vines, was hardly given time to speak at all while the folks on the other side of the issue were given loads of stage time and loud cheers of support. Reading that Slate article made me think, those conference organizers are The Worst.

Thursday: To prepare to preach today I read all of the book of Acts up until we got to today’s reading and a few verses after it.

So here’s a little Bible Study synopsis for you, or, maybe I should say, “Previously on the Acts of the Apostles”

OK, after his death and resurrection but before ascending to heaven Jesus promised his disciples that after they receive the Holy Spirit, they will be witnesses to him through all the ends of the earth. And I can tell you right now – they had no idea what that was going to end up meaning.

So they went to Jerusalem and huddled together in a room just kind of scared out of their wits and not knowing what else to do and then the day of Pentecost came and the Holy Spirit arrived and messed everything up. Because now, the Gospel of Jesus Christ was no longer something just for them – it was now heard in every language. When the Spirit came she brought with her all the people who were not like them which had to have been annoying.

The early church lived in a groovy little Christian commune where everything was perfect for about 20 minutes…then they started going out preaching and healing people and a couple of them spent a little time in jail but it was nothing that some good hymn singing and the Holy Spirit couldn’t take care of.

And because of that, this guy Stephen was super threatening to the religious authorities who were the guys who were paid to be the ones who were “full of faith and power doing great signs and wonders among the people”. So obviously they had to destroy him…he was brought in front of them in a little tribunal and he preached an amazing sermon –in which he kind of convicted them of the fact that they weren’t a people who cared to be told the truth about themselves –for instance, they tend to kill their own prophets. And their response? I’m not kidding you –they were so offended that he said they were a people who killed their own prophets that they ran him out of town and stoned him to death. But before picking up rocks, they took their jackets off so they could really get their arms into it and laid those jackets at the feet of this guy named Saul.

But, the text tells us, Stephen was filled with the Holy Spirit and gazed into heaven and saw Jesus. At which point he said Lord Jesus take my spirit and then he begged God not to charge the people with the sin of killing him.

And then it tells us that Saul consented to the killing of Stephen.

This is when the nascent Christian community in Jerusalem started to really suffer persecution and that guy Saul was wreaking havoc on the church – literally dragging men and women out of their homes and having them thrown in prison. Bottom line: that guy Saul was THE WORST.

Friday: I meet Matthew Vines for dinner – he is a young gay man from the Slate article who wrote a book called God and the Gay Christian. Matthew lives in Wichita and at dinner I said “Oh my gosh, tell me about that conference!” expecting him to be like, those guys are The Worst. And yet he said “It wasn’t nearly as bad as I thought.” He then told me that several people came up to him and thanked him for his bravery and said they were in the process of changing their mind around this issue and that his grace and love for scripture was super helpful for them.

Saturday morning: I finalized details for a talk I’m giving this coming week at – I can’t even believe I am saying this: Pepperdine University – a Church of Christ School. I’ve also been asked recently to give the keynote at the annual gathering of youth ministers in the church of Christ next year. I mean, what is happening? Because isn’t The Church of Christ supposed to be like, The Worst?

Saturday night: catch up on news from Baltimore and read that rival street gangs the Bloods and Crypts along with The Nation of Islam are working together there to quell the violence in the city and protest safely and peacefully. And I think: What is happening?

Sunday morning: … back to the book of Acts – OK – here’s where the Ethiopian Eunuch comes in – The Spirit tells Phillip to go join this gender-transgressive foreigner in a chariot on a road in a desert. (So that thing where The Spirit doesn’t care about the categories we care about? Yeah…that started way back.) I wonder if Phillip thought “that guy sounds like The Worst”

I imagine the first hearers of Acts being stunned by that story but not nearly as stunned as by what comes next.

Because the very next verse after this story of Phillip and the Eunuch is this : Meanwhile Saul, still breathing threats and murder against the disciples of the Lord….and I imagine the first hearers of this story going, I remember him form earlier, that guy is The Worst. And then the story goes that this same guy Saul — the guy who is without a doubt – the Very Worst, becomes St Paul – the greatest church planter and Christian theologian of all time.

How about them apples?

Sunday night: I stand here before you in this church on the corner of 22nd and Dexter among you people, right now and I say this:

What is happening with the Holy Spirit? Nothing makes any damn sense.

What is happening? I don’t know. But here’s something I suspect at this point: The Holy Spirit could really give a crap about our little categories. The spirit pays no mind to who we think is The Worst and why we think it’s not us. The Spirit doesn’t seem to understand how important terms like conservative and liberal, bloods and crypts, Lutheran and Church of Christ are. We are the ones who created these categories and seriously no matter how much we think God really should respect them, God doesn’t seem to pay much mind to that. Because God is about redemption, not ideology. No one gets their own personal Jesus in this life. Which means we have to see the potential redemption of even those we think are The Worst as good news for us.

That’s what happened to Stephen when filled with the Holy Spirit he asked God to forgive those who stoned him to death.

That’s what happened to Philip—he was blessed by the Spirit moving through a complete stranger, someone he didn’t expect to change him. That’s what happened to Saul— he was blessed by the Spirit moving through the wrong people, those he hated and persecuted. That’s what happened to Matthew Vines, and what is happening to me, and what is happening to you ….and it isn’t even close to being over. The Holy Spirit will have her say. And thanks be to God for that, because in the end we may think we need the salvation we envision would come through the destruction of those who we see as being The Worst. But what we have instead is a God who insists on more for us. We have a God who offers the kind of salvation that comes instead through drawing all people to himself – until we are all seated at the heavenly banquet where, with my luck, yeah…I’ll be seated right between a racist cop and that conservative Evangelical conference organizer and perhaps they will turn to me and say “welcome, sister” and I will weep and say Amen.

May 15, 2015 Sermon preached at the 2015 Festival of Homiletics
Recent Comments
0 | Leave a Comment
Browse Our Archives
Related posts from Nadia Bolz-Weber