Comparing Ourselves to Others; A Sermon on Pride, Despair and Scapegoats 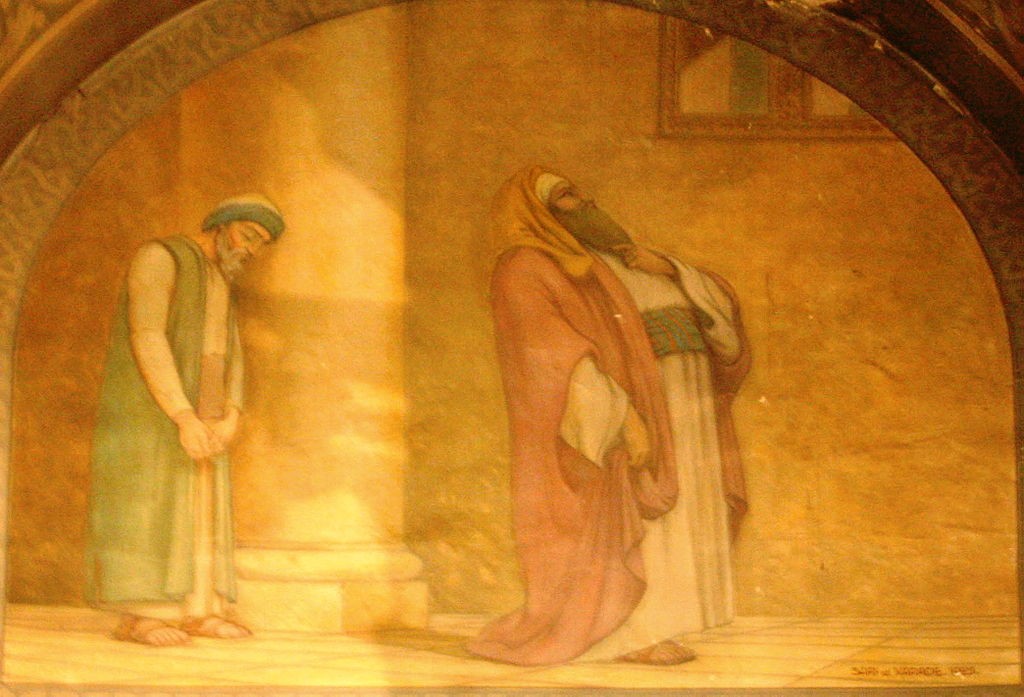 My mom likes to tell the story about when I was in Kindergarten and our next door neighbors were a young African American family with a daughter my own age and how their little girl always had what I considered, and consistently commented on bring the cutest hair. HER mother gave her little braids and twists and colorful little bows and what did MY mother give me? A ponytail. Every day. Ponytail. Apparently I commented on this endlessly. Peggy would patiently try and explain that I just had a different kind of hair but I was convinced that Peggy just wouldn’t fix my hair like the neighbor girl’s because I just had a different kind of mother. The kind that obviously didn’t love me enough to make me happy.

Anyhow, this is my first memory of comparison…of basing how I saw myself and my life on my perception of someone else and their life.

It was my first event in what my friend Debbie calls the Great Human Competition Extravaganza. My first experience in how unhappy I could make myself by comparing myself to someone else.

Which is why I’ve been thinking about one of Amy Clifford’s tattoos all week. She has an amazing quote tattooed on her arm. It says “comparison is the thief of joy”

That simple statement contains so much wisdom. We compare our income to that of others who make more money, we compare our looks to those we think more beautiful, we compare our actual relationship to the Facebook highlight reel of someone else’s relationship and then we make the leap to assuming all these people are happier than us. Or more worthy of love. Or more valued as a person or whatever. Comparison steals our joy. And comparison introduces despair when none is called for.

Because if I’m totally honest, comparison can also introduce pride when none is called for.

Or as the Gospel reading for today puts it, comparison allows us to trust in ourselves that we are righteous and regard others with contempt.

Comparison introduces pride when none is called for because we humans need to maintain a ranking system for ourselves and others so we can be sure of our value.

You think this isn’t true? Just ask any woman who has lost a significant amount of weight. I have a dear friend who lost 40 pounds last year. She started eating well and doing yoga and she’s so much healthier than she’s ever been – not to mention she looks fabulous. But she shared with me how painful it was to lose several girlfriends that she thought really loved her. See, she took away from them the feeling of pride and superiority they had from being thinner than her. She won the weight game and they felt like losers and they couldn’t handle how that changed their standing in some made up ranking system.

Comparison introduces despair when none is called for and pride when none is called for. But comparison has a more hidden insidious function as well: it also allows us to not have to look at certain things in ourselves. I mean, the best thing we can hope for if we feel guilty or icky about something hidden in us or hidden in our past is to find someone more guilty to carry all of it for us. This is why we can love having raging alcoholics around because it’s such a convenient way to not have to look at our own drinking. My favorite example of this is in the public shaming and fall from grace of Newscaster Brian Williams. Remember that? Yeah, so what did that guy do that made the world turn on him? He did not actually falsify a news report. No. He exaggerated a personal story. Something every single human being has done ourselves. But the thing is, usually we are the only ones who know that we’ve exaggerated a personal story and that creates an icky feeling in us. And icky feelings build up and the stronger and stronger they get, the more we try and hide why they are there… so much so that we have to do something about them. So…then Brian Williams comes along and it comes to light that he (gasp!) exaggerated a personal story and we all get to be like, HOW DARE HE! And then we get to throw all our icky feelings about our own tall tales and we get to place them all on Brian Williams and then we kill the scape goat to alleviate our collective anxiety about ourselves and this bonds us to each other and creates social cohesion.

Perhaps the exact kind of social conhesion liberals in the US feel right now.

Because nothing in recent history had done more to make me feel righteous in myself than when I detail my own contempt for a certain presidential nominee and their supporters.

It’s awesome, because right now I conveniently never have to look at my own xenophobia – or that icky feeling I get when I know I’ve internalized some woman-hating messages even though I’m supposed to be a feminist. All that crap inside of me that feels so icky to have in there because I don’t actually agree with any of it well, those icky feelings I wish I didn’t have but I do, they build up. And see, I need to be able to do something with them. So thank GOD I have a presidential nominee and their supporters to compare myself to.

The parable we heard today is a somewhat famous one: a Pharisee and a tax collector go up to the temple to pray and the Pharisee was like God, I thank you that I am not like other people: thieves, rogues, adulterers, or even like this tax collector. I fast twice a week; I give a tenth of all my income.’ (I suspect the Pharisee is conveniently leaving out some details here…like maybe he’s not so honest in his tax returns)

And so the Pharisee tries to impress God with how good he is in comparison to the Tax Collector.

But Jesus will have none of it. Remember this is the guy who said ‘You have heard it said, “You shall not commit adultery.” But I say to you that everyone who looks at a woman with lust has already committed adultery with her in his heart. Everyone around Jesus that day who considered themselves righteous because they had not cheated on their spouse were pretty bummed that Jesus would take that ranking away from them so quickly. But he doesn’t up the ante to be mean. He ups the ante so that we realize how futile the human righteousness ranking system is. And he does this so that we will finally trust in God’s grace and mercy (which is endless) and not trust our own righteousness (which is like, super limited).

Maybe this is why that amazing Lutheran theologian Detrich Bonhoeffer, said that the Gospel is frankly hard for the pious to understand. Because the Gospel confronts us with the truth saying you are a sinner, a great and desperate sinner. Now come as the sinner you are to the God who loves you madly.

This is why the great human competition Extravaganza is spiritually meaningless: because God isn’t ranking anyone. It’s hard for us to understand, especially when I tend to trust in myself that I am righteous.   It’s always so tempting to rank ourselves, and we are conditioned to do this, but the Gospel puts this to death. The gospel confronts us in our virtue and piety and social justice purity and says “You know what’s actually rigged? the ranking system is rigged and you are a sinner. You need not rely on your ability to be better than others. But here, sinner…here is something better. Lay down the ranking system. Walk away from your projects of self-perfection and the PR about how good you are or the PR about how bad you are. None of it matters, because the terrible mercy of God reaches past those layers – it reaches right into your soul and claims that soul as God’s own. God reaches past the photo-shopped, Facebook profile picture and into the stark reality of our actual hearts. Into every hidden motive, into every racist thought, into all our secret self-loathing and fear, into every dark thing that we hide so well. None of it is safe from the terrible mercy of God. Because God is determined to redeem us – so determined that God will not allow us to maintain the delusion that we can redeem ourselves – and Thanks be to God for that. Amen.

November 8, 2016 An All Saints Sermon on Grief and Babies and the Breath of God
Recent Comments
0 | Leave a Comment
Browse Our Archives
Follow Us!

Five Ways To Be The Church...
Irreverin
Related posts from Nadia Bolz-Weber