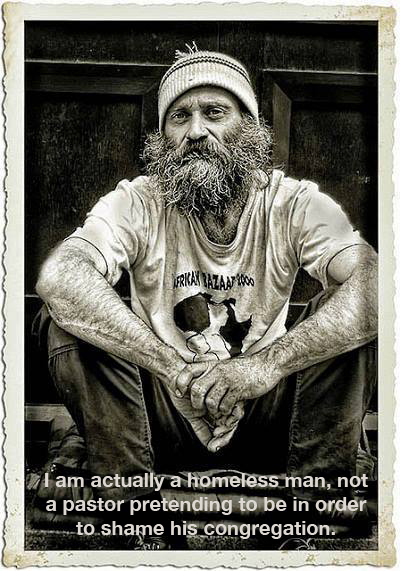 Why I Would Not Attend Pastor Jeremiah Steepek’s Church

I saw this story circulating around Facebook of Pastor Jeremiah Steepek who transformed himself into a homeless person and attended the church he had just been hired by on the first Sunday. He was passed by, overlooked, and asked to sit in the back pew. Instead of getting some needed spare change he got dirty looks.

After the new pastor was introduced by the elders, Pastor Steepek, the homeless person, walked to the front to the dismay of the 10,000 member church. He then read some scripture above the tears and the shameful heads of the congregation. He closed with these words:

“Today I see a gathering of people, not a church of Jesus Christ. The world has enough people, but not enough disciples. When will YOU decide to become disciples?”

FIrst of all, this is not a real event, but a hoax. It could be loosely based on a true story of a Tennessee pastor Willie Lyle who lived as a homeless person for four days and preached a sermon based upon his experience. But this story circulating around Facebook is not real. Many people say that even though it’s not real, it’s still an inspirational story. Even the photograph is of an actual street person and not who it pretends to be. But we won’t even go there for now.

But I disagree. I did not find it inspirational but discouraging. If I’m wrong, just tell me. To build my argument, let’s pretend it did happen. I want to explain why I would never sit under such a pastor’s ministry.

Shame is a motivator, but not permanently, and not in significant and meaningful ways. It gets something done now, but it destroys hope and character in the long term. Love is the best motivator. If it isn’t out of love, then it’s not a healthy motivation. Sure, people need help, and if we give them money out of shame or love, they’re not going to care, as long as their lives are improved. But Pastor Steepek is more concerned about motivating his people to do something he thinks they should do, whether they are good people or not. He wants temporary results rather than permanent transformation.

This poor congregation was embarrassed just for a good sermon. Warning: this pastor will do it again. He is going to use shame, fear, embarrassment and guilt to motivate his people to fall in line with his wishes. I wouldn’t be going back in a million years.

2. Scapegoating: Another favorite pastime of the church is to blame others for evil, suffering or mishap. The pastor blames the congregation for not helping the poor. We, the readers, blame the congregation as well for not helping the poor. The fact is, Pastor Steepek himself has walked by many homeless and poor people in his life. So has the Dalai Lama. And Jesus walked past many homeless and poor people and we are never told he gave anyone any money. In fact, there is one documented story where he initially refused to help a woman just because she was of the wrong race.

These poor people were in church caught completely off guard. This is the kind of Christianity I was raised on in Baptist and Pentecostal churches where shame reigned supreme. I constantly lived in fear of Jesus showing up while I was relaxing or having a good time and being embarrassed that I wasn’t dying for him somewhere in the third world. Seriously folks! Can’t we see how shaming this story is?

Not Pastor Steepek! His closing remarks: “YOU” places the blame totally on their heads. He is the church. They are just people. He is a disciple. They have yet to decide whether or not they’re going to be. He is completely unaware of the fact that they are us, him included! It’s the typical top down I’m better than you and I’m here to beat you up about how far down the spiritual chain you are from me.

3. Bad Modeling: Another weakness of the church is that it has difficulty providing a good model for those watching. Did you know that people will do bad things when surrounded by their peers who are doing bad things? I heard a study was done on nurses, and they found that only one out of twenty-five nurses will stop a doctor from administering the wrong dose because of the fear of authority and their peers. Peer pressure is enormous.

What if, instead, when poor Pastor Steepek came into the church, the elders (who were in on it)… what if they led the way and showed the homeless man some kindness? What if they shook his hand, gave him some money, offered him a coffee and donut, welcomed him to come sit with their families and maybe took him out for lunch after church with some other members? What if that happened that Sunday, and maybe the next? D’you know what I think? I think this would have beckoned, as Lincoln said, “the better angels of our nature”, and the homeless man would have enjoyed a totally different experience in a loving and accepting community.

No. Instead, as is usual with spiritual leadership these days, it’s more effective and emotionally dramatic to embarrass people. It’s so much easier because doing nothing takes no effort while doing good takes a lot of effort. The pastor appealed to their weaker selves and proved it was there. We don’t need to be reminded in such embarrassing ways. Spirit-shaming! It comes as no surprise. I already know I’m inclined towards laziness, selfishness and fear. But if I’m encouraged to apply effort, be generous and courageous, I have more than enough to meet the need and I will shine like I can.

So, it’s a hoax. But many still think it’s wonderful. So in my mind it might as well have happened. And if this church did exist with this pastor, I would stay a mile away from it and advise you to do the same. Who needs more shame in their life? Not me! But this tells me that we have so much work to do. It’s deeply rooted in our culture and our religious mindset. I encourage us to relieve ourselves of shame and guilt and using it as a tool to achieve our own ends.

The monsters of Rutherford County
slacktivist
Related posts from nakedpastor