David was baptized Anglican as a baby, came to faith in a Baptist church when he was a teenager, changed to Pentecostal in his late teens, married another Pentecostal named Lisa, was ordained Presbyterian, pastored a Vineyard church, and planted others. 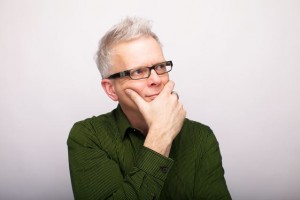 He has a Masters in Theological Studies from Gordon-Conwell Theological Seminary, as well as a Diploma in Religious Studies and Ministry from McGill University in Montreal.

In 2010 David left the professional paid clergy. He is still passionate about how people can find and follow their own spiritual path with courage and joy, as well as in how people can freely gather and form community in healthy ways.

David started a blog called nakedpastor in 2006, and initiated his public analysis of religion, religious community and spirituality through his writings, art and cartoons. Thousands of people are challenged and entertained by nakedpastor every day.

In 2012, David launched The Lasting Supper, and online resource site and community for the spiritually independent.

His art, cartoons, writings and book have found their way all around the world.

David lives with his wife Lisa on the beautiful Kennebecasis River near Saint John, New Brunswick, Canada. They have 3 grown children close by.

Here is my timeline:

1957 Born in Toronto, Canada.
1957 Infant Baptized in the Anglican Church.
1973 was “born again” at a Baptist youth night.
1974 switched to the Pentecostal Church.
1975 filled with the Spirit and spoke in tongues
1976 graduated from Newmarket High School
1977 worked as a security guard at Toronto’s parliament buildings.
1978 went to Central Bible College in Springfield, MO.
1978 met Lisa Washington from Alabama.
1980 Married Lisa.
1981 Graduated with B.A. in Bible and Theology. My goal was to teach Bible.
1983 M.A. in Theological Studies from Gordon-Conwell Theological Seminary under Dr. Gordon Fee.
1983 Assistant to the minister at Zion Presbyterian Church in Charlottetown, Canada. Spiritual crisis here.
1986 went to Knox College at the University of Toronto to get my PhD in Biblical Studies.
1986 Lisa finds out she is pregnant and all our plans change. Through a fortuitous meeting with Dr. William Klempa, the president of Presbyterian College at McGill in Montreal, we end up transferring there for the Diploma in Religion and Ministry. I also serve two small presbyterian churches in the Adirondack mountains of New York.
1987 Our first child, Joshua, is born. I graduate and am ordained into the ministry of the Presbyterian Church in Canada. I accepted the charge of three small presbyterian churches in rural Nova Scotia for the next 5 years.
1989 Our second son, Jesse, was born.
1992 Our daughter Casile was born.
1993 I accepted a call to plant a presbyterian church in the Annapolis Valley of Nova Scotia.
1995 Fell into hopeless despair because I felt trapped in a system I couldn’t escape.
1995 Lisa and I attended a Vineyard conference in Saint John, New Brunswick, Canada. Received prophetic words and met amazing people. Long story short: decided to move to the church who hosted the event just to enjoy that kind of church life and community.
1996 Pastor Steve Witt asked if I would take over him as pastor of Rothesay Vineyard since he felt called to return to Ohio to plant another one.
1997 One year later we went through a church split that would initially take half of the congregation and eventually take three quarters.
2002 Accepted John Paul Jackson’s (Streams International) invitation to plant a church in New London, New Hampshire.
2002 John Paul Jackson and I parted ways.
2003 By invitation, we returned to Rothesay Vineyard. Started nakedpastor.
2006 Doug, who had replaced me, decided to go into business and I was asked to return as the pastor of Rothesay Vineyard.
2008 Lisa is accepted into the nursing program at the University of New Brunswick in Saint John.
2010 I quit the ministry. Reason: the church and I were no longer compatible.
2010 Taught English as second language at the University of New Brunswick in Saint John.
2012 I launched The Lasting Supper, and online resource site and community for the spiritually independent.