Thealogy of the Chambered Nautilus

(Rev. Shirley Ranck is one of the founding members of CUUPS and served on the board for its first decade of existence, stepping down in 1996 to serve as it’s first Executive Director. She is the author of Cakes For the Queen of Heaven which is an women-honoring UU Religious Education course which examines pre-Judeo Christian cultures that may have worshiped the female as divine. This course has been used in approximately 800 of the 1,050 UU Congregations. She is also a retired UU minister who served congregations in Alabama, California, Maine, Michigan, Nevada, Ohio, Washington and British Columbia, Canada. This is an excerpt of her keynote talk at the CUUPS 2016 Convocation held this August in Salem, MA.)

Let me introduce you to a most wonderful creature of the sea.  The chambered nautilus is found in the western Pacific Ocean at depths of 165 to 325 feet.  It is characterized by internal subdivision of its shell into successive chambers.  The walls which separate these chambers are laid down by the animal during its growth and have at their center a hole through which the mollusk, while occupying the last chamber, remains in contact with the previous ones.

I would like to suggest some theological analogies that can be drawn from the nature of the chambered nautilus.

It seems to me that Unitarian Universalism, like the chambered nautilus, has as its developmental task the creation of new chambers—new visions, myths and environments for nurturing the life of the human spirit.  We can live no longer in the chambers of the recent past, however appealing they seem.  And we can deny no longer some distant chambers of the past, however strange they seem.  Like the nautilus we are destined to create new chambers whether we like it or not.  Unlike the mollusk we can choose what kind of chambers we attempt to create.

The first theological implication of such an analogy is that the divine resides in the natural world as the shape of growth and creativity.  Life keeps creating new chambers, new events and at each stage, in each event there exists the possibility for novelty.

To perceive the divine as growth and creativity immanent in all the world means that the insights of one individual or of one community of faith will not suffice.  We can no longer afford to divide the world into armed camps of competing gods and ideologies.  We need to look for the common human themes that will enlarge our experience, widen our identities, cause us to grow.  In order to discover those universal themes we need to be aware of the unconscious assumptions which are being made by all parties or religions, assumptions which few in any of the groups are aware of.

Thus the second theological implication to be drawn from the chambered nautilus analogy is that we carry with us into the present all the chambers of the past, both positive and negative, even as we live in a new space and time.  A tiny hole connects each chamber with the one before it.  In this way the animal remains in contact with all of its previous chambers.

Let me cite one glaring example of the way in which our assumptions prevent us from being truly universal.  Until now we have thought that by giving intellectual acknowledgment to all the major world religions as worthy of respect, by reading occasionally from their scriptures, we were doing all that was needed to express our universal outlook.  But because the symbolism of Judaism and Christianity as we have known them is almost exclusively male, and because we assume that male symbolism is the only kind possible, we have failed to understand that the symbols and practices of all the major world religions tend to denigrate half of the human species.  If we set all those traditions aside for a moment and look at the innocent chambered nautilus, we are brought back to the universal truth that divinity resides in the growth and creativity of all of life, in the growth and creativity of women as well as men.

As a human community we have also accepted a very biased view of history.  We have had to learn that American history looks very different when described from an African American or Native American perspective.  It is the same with women.  For many thousands of years, in historic times as well as in prehistoric times, human beings imagined the divine as female.  We have been taught by male historians that the religions of the great goddesses of the ancient world were mere primitive fertility cults.  But the archeological evidence of recent years does not support that view.  We find instead hymns and liturgies which ascribe to the goddess the power of mighty counselor and the highest demands of love and justice.  When we open ourselves to female as well as male experience in history we choose to honor those distant chambers of our human past when the divine was imaged as female.  We are creating new chambers for a new life.

A third theological implication of the chambered nautilus is that in seeking a balance between our ties to the past and our openness to the present, we can create something new and beautiful.  It is one of the paradoxes of growth that as we take the risk of maintaining creative tensions, we discover new harmonies.  In our own psyches, acknowledging our deepest wishes and fears is the first step toward a resolution or constructive use of those forces.  In our close relationships a crisis in which resentments are expressed may be the beginning of deeper understandings.  In our communities and in the world at large we often seem to lack that kind of trust.

We need desperately to explore new patterns of behavior at all these levels.  The spiral of chambers created by the nautilus comprises one of the great patterns repeated in our universe, in the stars and in this creature of the sea.  It is necessary to return to the cycles of the past in order to grow.  It is also necessary to spiral out beyond these circles into new experiences in order to be truly creative; and the shape of each new chamber is something more than the sum of all past chambers, something truly novel. 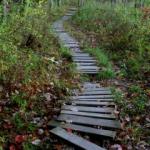 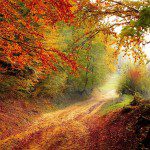 September 20, 2016 Senses of Autumn, Senses of Home
Recent Comments
0 | Leave a Comment
Browse Our Archives
get the latest from
Nature's Sacred Journey
Sign up for our newsletter
POPULAR AT PATHEOS Pagan
1