In Search of Samhain

In many corners of the Neo-Pagan movement, there are few High Holy Days considered higher or more holy than that of Halloween. While individual practices vary from tradition to tradition [1], arguably the most prevalent are those inspired by the Gaelic (that is, the Irish) flavor of the ancient Celtic New Year festival. Considered the most important of the Celtic “fire festivals” [3], the remnants of the Irish Samhain (“SOW-en”) have over time been transformed into today’s creepy, spooky, (sugary), night of mischief and magick.

While recently talking about the secular Halloween with a friend of mine, she was quick to write the whole concept off as a scheme concocted by candy companies and bearing little resemblance to an actual Pagan holiday. And her observation poses an important question: how much of the modern Halloween reflects the Irish Samhain and its Continental Celtic predecessors? The conventional wisdom would imply that only a small bit of the old holy day would go on to influence the secular holiday, by way of centuries of folk traditions becoming consumerized and sterilized by the mid 20th century. And while I appreciate this view and my friend’s modern cynicism, I find disagreement with both because even in its secular form, Halloween is loaded with what smell like Pagan themes. Otherworldly beings and the dead walk the streets, come to your door, and demand you give them an offering or else risk your property and good fortune (“Trick or treat!”). Then, in order to sate them and ensure one’s own continued prosperity and security, you give these visitors devotional offerings and send them on their way. From my seat as a Devotional Polythiest, all this looks very Pagan to me.

So what did the original holiday look like to the Celts and Gaels? To answer this question, we must begin by looking at some core pieces of Celtic cosmology in order to better understand the importance of Samhain within it. Then by discussing the folk practices that survived into the twentieth century, we will be able to better identify the roots of the modern practice. And once all this digging is done, we will find that the secular Halloween isn’t that far removed from its Celtic Pagan roots after all.

About D.C. McBride
A Unitarian-Universalist since 2009, Dan McBride is a practicing Devotional Polytheist, a member of Ár nDraíocht Féin: A Druid Fellowship, and the Coordinating Officer of UUCB-CUUPS.  His spiritual interests are in Neo-Pagan religions and Irish folklore and mythology, as well as in inter- and intra-religious dialog.  Outside of the grove, he enjoys technology, hiking, camping, skiing, history, photography, and adventuring with his wife.  A fifth-generation downstate New Yorker, Dan traces his roots back to the Italian region of Calabria and County Waterford in Ireland.  He currently resides near the confluence of the Susquehanna and Chenango rivers in Binghamton, NY, where he makes his living as a technology professional. You can read more about the author here.
Previous Post 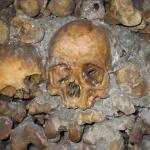 October 28, 2016 Embracing Samhain, Embracing Life
Recent Comments
3 Comments | Leave a Comment
Browse Our Archives
get the latest from
Nature's Sacred Journey
Sign up for our newsletter
POPULAR AT PATHEOS Pagan
1

Voting Out Trump Is a Part...
Raise the Horns
Related posts from Nature's Sacred Journey