Questions to a Future UUA President: How Have You Been Influenced By/Interacted With UU-Pagans?

Questions to a Future UUA President: How Have You Been Influenced By/Interacted With UU-Pagans? June 1, 2017 David Pollard

On June 24th representatives of the 1,000+ congregations of the Unitarian Universalist Association will choose the Association’s President for the next six years. This will happen at the UUA’s annual General Assembly, held this year in New Orleans, Louisiana. Back in January we solicited questions from our readership to ask the candidates.We received several, a few of which were duplicates and narrowed it down to three questions which were sent out to all three candidates. Over the past couple weeks we’ve gotten the answers back and for the next three days we will provide you with the both the questions and the candidate’s full answers to them.

Today’s question, which is actually the third one we asked them:

Please share a story of how you have personally been influenced by or interacted with UUs who identify as Pagans.

My very first interactions with Unitarian Universalists who identify as pagan began as child and youth at Eliot Unitarian Chapel where I grew up. I remember as a very young child the annual Maypole celebrations led by women who identified as pagan at the congregation. As a youth, a number of my close friends also identified as pagan. However, it was during my internship in Nashville, Tennessee, when I roomed with a UU seminary studying at Vanderbilt that I learned more about specifically about her spiritual path and practice as a Wicaan that my knowledge of paganism grew.

All of these experiences, combined with my own path to finding spirituality through a love of science and recognition of the interconnectedness and unity of creation that has helped my own theological foundation be shaped by an earth-centered spirituality. This has only grow during my experience living and ministering in Arizona. Arizona is a state of many indigenous nations. The work I have done on immigration justice has been in partnership with Indigenous leaders. In addition, the Phoenix congregation has a number of members who are indigenous and bring that spiritual practice into their leadership in the congregation.

As a lifelong Unitarian Universalist and as a minister, UUs who identify as Pagan have always been a part of the UU congregations/ campus groups/ and covenanted communities that I have participated in and led. The Pagan UU who has had the largest influence in my life is Margot Adler, who was a member of my home congregation. As a youth, I remember attending women’s spirituality circles with Margot and my mother where I first encountered a very different form of worship from the traditional Sunday morning service in our sanctuary at All Souls, NYC.

When people would ask questions about Pagans and Wiccans while I was growing up, I would talk about the witch I knew who was also an NPR spokesperson. Margot was exceedingly generous in sharing what she knew and was willing to come and speak to college students to support the campus ministry I was leading, which I greatly appreciated. One of my favorite stories was when Margot and I shared a delegate credential at a General Assembly while I was part of the Youth Caucus. She had to leave early that year. When she handed over the responsibility of voting to me, she said, “You must make me one promise.” I said, “Okay, what is it?” Margot said, “You must vote Yes! on the addition of the sixth source about earth-centered traditions.” I laughed and said, “Of course!”

My understanding of the divine and my commitment to the wellbeing of our earth has been shaped by interactions with indigenous people who are Unitarian Universalist and with earth- centered and Pagan Unitarian Universalists. I have learned from them through reflections they shared at General Assembly, at conferences, and in our congregations, as well as in numerous experiences of being in a circle surrounded by their healing prayers, presence, and practices.

Maury is a Pagan Priest who connected with our community through Pagan celebrations at our congregation. He became UU as he came to know members of the community and found they were welcoming and friendly. Even so, he shared that he felt the worship services were too casual. Maury loves words and writing, and he thought everything that was spoken ought to be scripted. Many congregations do. At First UU there are many moving parts, but what changes most from Sunday to Sunday and service to service is the energy of the gathered community. In planning, we try to leave room to adapt for how we are interacting with one another. Maury and I discussed the services, how they went, what the energy was and to be fair, how he would like to have seen things proceed. Maury and I had some long talks. We discussed our theological differences, agreements and shared poetry for service use. He helped me to understand why he hoped to use carefully planned word choices to create worship mood and I explained to him how I wanted to respond to the mood in the moment, channeling and focusing it to welcome and include. As a result, for worship we scripted a bit more and Maury developed an appreciation for how we adapted. When we had earth-centered worship, we planned and used our words with great precision. Our skill for word use rose. We found a middle way.

After several years, Maury chose ultimately to locate himself with a community that focuses on Celtic worship but we are still in touch and we are still learning from one another. It was hard to see him leave UU but our differences strengthened one another and our congregation’s worship.

Tomorrow we will look at the candidates responses to how they believe Pagan and Earth-Centered UU’s can best contribute to the work of social and environmental justice. 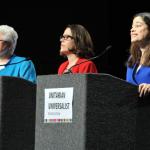 June 2, 2017 Questions to a Future UUA President: How Can Pagan UUs Contribute to Social & Environmental Justice Work?
Recent Comments
0 | Leave a Comment
Browse Our Archives
get the latest from
Nature's Sacred Journey
Sign up for our newsletter
POPULAR AT PATHEOS Pagan
1

Is it Lughnasadh without Lugh?
John Beckett
Related posts from Nature's Sacred Journey