Could Life After Life Be Fun?

the nature of leaves

Nan Lundeen has written three books of poetry. Visit her at www.nanlundeen.com

Could Life After Life Be Fun?

At my friend’s house in the Blue Ridge Mountains, fairies wink at you from underneath ferns and a black bear sleeps among the daylilies. So, it wasn’t altogether a surprise when my dead relatives made an appearance on Samhain Eve.

We’d gathered in my friend’s back yard to create sacred space in a circle around a bonfire, my 12 sisters and I. It was dusk and the mountain air turned our noses pink. I wished I had worn gloves.

We sat in quietude and listened to the whoosh of the thick bed of leaves as women joined the group one by one. River over rock, river over rock—the Pacolet flowed alongside the yard.

We had bonded in a class, the Unitarian Universalist women’s spirituality curriculum Cakes for the Queen of Heaven, which gave us heart and attitude. The phrase comes from the Bible, from Jeremiah, in which Yahweh complains that women are baking cakes to celebrate the Goddess as they had done for centuries instead of bowing to a monotheistic male god. Indeed, the female body was sacred. The feminist approach to spirituality spoke to me. Two decades earlier, it had been the 1970s wave of feminism that gave me courage to turn my back on the patriarchal, fundamentalist Christianity I’d been raised in. Because women are not less than.

I had avoided narthexes and naves for 20 years before I found the Daughters of Gaia, a U.U. women’s circle where I lived in Massachusetts. When I moved to the Carolinas, I rediscovered the relief and sustenance to be found in a circle of sisters.

Together we studied books such as When God was a Woman by Merlin Stone, The Chalice and the Blade by Riane Eisler about goddess worship in prehistory which presented the divine as a nurturing mother, and The Goddesses and Gods of Old Europe by Marija Gimbutas. We discovered that a wealth of archaeological evidence supports the existence of matriarchal, peace-loving societies in the distant past. Gimbutas’ study of symbolic artifacts reveals a recognition of the female as Source and Giver of All.

We began to research the goddess stories such as Isis, the widely worshipped goddess who originated in ancient Egypt; Brigid, Celtic goddess of healing, smithcraft, and poetry; and Guanyin, the Eastern bodhisattva of infinite compassion. I began to conceive of the divine as immanent—in and with the world and ourselves—in a creative process of change. At root, I felt compassion and divine love, a living, changing, sacred, alive energy without limits, neither expansive beyond galaxies, nor identifiable with unnamable minute infinitude. Along with all of this, a warm and surprising sense of humor.

Our circle learned how to settle differences through consensus rather than hierarchical relationships. Some of us already being older, we began to Crone one another in life-affirming rituals, honoring the strength and wisdom of women over age 50. Guided by Diane Stein’s book, Casting the Circle: A Women’s Book of Ritual, we learned how to create sacred space.

It was with all this as a base that we gathered in my friend’s back yard that Samhain Eve, the time when the veil between this life and another is thinnest.

When it came time for the meditation part of the ritual, I closed my eyes, smelled the burning pine and fallen oak of the bonfire, and listened to the Pacolet falling over rock. Some time into deep-breathing, I felt a surge of joy. In my mind’s eye, I saw my mischievous Aunt Geneva, Uncle Alvin, Mother and Daddy, each on their own broom, flying, dipping, rising, and laughing with the waters of the Pacolet. Back and forth over the mountain stream they swooped like cowgirls and boys enjoying the heck out of a ride on a lively steed.

“Death isn’t so bad once you get over the idea of it,” Aunt Geneva called out to me.

Every Samhain, I relive that joy. The anxiety attached to my own shrugging off this mortal coil slinks away and hides in a corner where I imagine a kind spirit takes it under her wing.

About Nan Lundeen
Nan Lundeen has written three books of poetry. Visit her at www.nanlundeen.com You can read more about the author here.
Previous Post 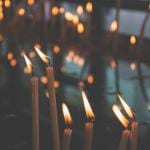 October 8, 2019
Beyond the Veil: Connecting with the Ancestors
Next Post 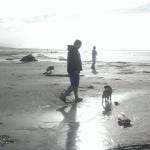 October 29, 2019 I See Dead People
Recent Comments
1 Comment | Leave a Comment
"Thank you. I'd love to hear your thoughts about Santa and how he came about"
lacey Celebrating Yule while living in a ..."
"We want not some but more bl moments 😍😘V.866B.CO/i6142Xo"
furry6000 A sound bath can help ground ..."
"I discovered the power of singing bowls maybe 14 years ago at Circle Sanctuary. I ..."
kenofken A sound bath can help ground ..."
"That picture looks very familiar. With the help of my mom and my sister, fifty-three ..."
Amanda Ingalls Change happens — let it roll ..."
Browse Our Archives
Related posts from Nature's Sacred Journey