Patheos Explore the world's faith through different perspectives on religion and spirituality! Patheos has the views of the prevalent religions and spiritualities of the world.
By Hazel Gómez

In this strange era of the increased attempt of institutionalizing Islamophobia from the right and the subtle cultural Islamophobic blows from the left, Muslim women who choose to cover with the khimar aka ḥijāb/headscarf are at the receiving end of it all. From governments trying to implement ḥijāb bans to fellow citizens being hostile to the point of physical harm, wearing the khimar– an outward religious expression of a woman’s adherence to the Islamic faith – has become politicized. 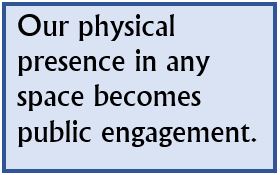 society know that we are trying to live God-conscious and moral lives; our physical presence in any space becomes public engagement.

Muslim women choosing to cover their heads are usually asked that one question by curious onlookers: “Why do you wear that scarf on your head?” The answers are as varied as there are Muslim women in the world. Each woman has her reason for wanting to wear the ḥijāb. Some women choose to wear it as a form of gratitude to her Lord, others wear it because they want to embody the traits of the early believers such as the Virgin Mary – upon her be peace – and some wear it as a form of da’wah/outreach in order to draw people in to ask about Islam.

Yes, wearing the khimar is a command from God Almighty, but in the end, a woman’s decision to wear it is between her and her Lord – and no one else.

God says in the Holy Qur’ān in Chapter al-Aḥzāb (33), verse 59, “for the women of the believers…to be known,” meaning to be known as believing women. It is meant to be an outward expression of an inward spiritual journey towards God. Men should have absolutely nothing to do with a woman’s choice to cover; they are not, and have never been, a part of the equation.

As a Latina convert, wearing the khimar was not an easy decision. Coming from non-Muslim majority cultures as a Puerto Rican and Mexican, I knew that wearing the scarf would make me stand out in my neighborhood, I knew I’d get inquisitive looks and get asked a multitude of questions, but I was ready for it. In my mind, I thought, “Why not 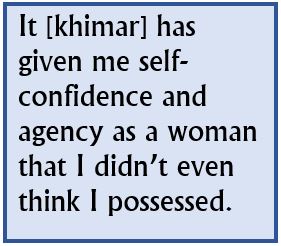 wear it? God has given me so much and all my Creator asks of me is to cover and dress modestly? So, why not?”

Over the years, I have seen how the khimar has kept me conscious with how I interact with the world around me; it has given me self-confidence and agency as a woman that I didn’t even think I possessed. I became my full self when I started wearing the headscarf, and for that, I am eternally grateful to Allāh.

World Hijab Day is a great way to start some form of solidarity and awareness, but it isn’t and shouldn’t be made a mockery. The khimar is sacred and should be treated as such; it isn’t just a piece of cloth, it represents a conscious way of life for women. On this World Ḥijāb Day, many women from other faith traditions or no faith choose to wear the headscarf in solidarity with Muslim women. Women wear it to experience what it is like to be a ḥijābi for a day. They color coordinate the scarf with their outfits, post it on Instagram under the hashtags #ootd and #worldhijabday, and proceed to explore the world as a perceived covered Muslim woman. 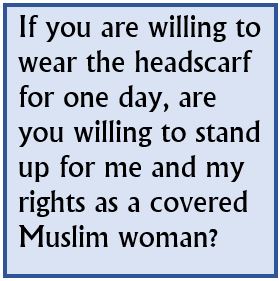 Well, I have some questions: if you are willing to wear the headscarf for one day, are you willing to stand up for me and my rights as a covered Muslim woman? Are you ready to be my accomplice as I fight for my voice to be heard in a society that tells me I don’t belong here? Are you willing to stand by my side as I fight off Islamophobic trolls, many of whom are in your own family, who wish to see my religious identity and practice eradicated from the public sphere? We need more allies and accomplices who want to live God-conscious and moral lives as we do as Muslims.

I know why I decided to wear the ḥijāb. Do you?

Hazel Gómez graduated from Loyola University Chicago with a Bachelor’s degree in Forensic Science. Currently, she is studying the Islamic sciences with Rabata.org’s Ribaat Academic Program under the tutelage of Shaykha Tamara Gray.

Hazel is a community organizer with Dream of Detroit, a nonprofit that combines community organizing with strategic housing and land development to build a healthy community and empower a marginalized
neighborhood. She also dedicates her time as an advisor and board member to various nonprofits ranging from community development and convert care to anti-racism work and mosque development within the Muslim community.

Previously, Hazel worked as a research assistant on the Muslims for American Progress study at the Institute for Social Policy and Understanding and also spent time as a community organizer with the Inner-City Muslim Action Network (IMAN) in Chicago focusing on the intersection of immigration and criminal justice reform. She also worked as the lead research assistant at the Alternative Education Research Institute focusing on the analysis of the criminal justice systems, reentry programs, and conversion to Islam of certain Latin American countries.

She is an avid reader of all things about Muslims in America and is interested in the research and creation of an authentic Latinx Muslim experience. 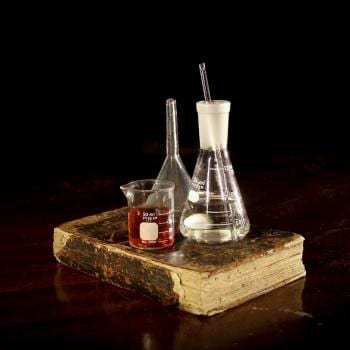