A Letter to My Son

“We’re having a boy!” After three daughters I never thought we would utter these words. The celebration your mother and I had in in the ultrasound room confused the technician as she had no idea how excited we were to welcome a son into our home.

When I look at your blue eyes and bright smile I see the reflection of the two greatest men I have ever known- your grandfathers. Your Pa Eddie tried to teach me how to be a man as I was growing up. He attempted to teach me the important things in life- how to fear God, walk in integrity, and treat others with respect. He also showed me skills he knew I would need like how to work on a car, save money, and perform routine household maintenance. Instead of listening to him, I reacted with arrogance, impatience, and anger. Almost everyday I wish I could talk to that fourteen-year-old boy and tell him that his future self needs him to listen to his father with humility, patience, and eagerness. I would tell him that twenty-five years from now he would crawl across a desert to have the opportunity this impatient punk was squandering.

The reality of my foolishness came crashing down on me at last in my early twenties. I sat in my apartment in Louisville frustrated, angry, and confused as I wrestled with a problem. (Thankfully the years have helped me forget what the exact problem was.) As I thought, vented, and prayed I came to the realization that going my own way and not following the path my father pointed out for me had devastating consequences. I grabbed the phone and called him, hoping he would be home. He was, and he got treated to a speech he must have enjoyed hearing. “Dad, what I am about to tell you I know you know already. I want you to know that I know it now. You are smarter than me and I regret not listening to you.”

Son, the foolishness of your father’s youth holds one of the most important lessons you will learn in your life- you must have the humility to admit you don’t know everything, and you need wisdom that comes from beyond yourself. For most of the last decade I have kept my nose in the book of Proverbs. The short, memorable statements in Solomon’s instruction to his son give great instruction in many areas of godly living. Too often though we miss the first nine chapters of Proverbs. Solomon pleads with his son to choose the way of wisdom before he shows him how to live wisely. He wants to show the way of wisdom and the way of folly so his son can see clearly the character and destination of each path.

In 3:5-8 Solomon says to his son, “Trust in the Lord with all your heart, and do not lean on your own understanding. In all your ways acknowledge him, and he will make straight your paths. Be not wise in your own eyes; fear the Lord, and turn away from evil. It will be healing to your flesh and refreshment to your bones.” Two times in these four verses Solomon entreats his son to avoid the foolishness which comes from arrogance. “Do not lead on your own understanding.” “Be not wise in your own eyes.” These two short commands constitute a call from a father to his son, calling him to abandon the foolish idea he has nothing to learn and no one to whom he needs to listen.

Solomon’s main idea in these verses is to help his son understand that the first step to being a wise man is acknowledging your own lack of wisdom. Notice the necessity Solomon feels to tell his son to trust in the Lord instead of leaning on his own understanding. After this he instructs him to fear the Lord and reminds him not to be wise in his own eyes. Solomon’s warning to his son serves as an important reminder that the greatest barrier between you, your God, and a life of wisdom and joy will be your own pride.

Even in your early years people will tell you to follow your heart and be true to yourself. Ignore the foolishness of these well-meaning, but ridiculous platitudes and listen to the wisdom of the Lord. Humble yourself before him, disavowing every notion that you can figure life out on your own. Fear the Lord, trust in his grace, sit at his feet to learn his word, and listen to the men around you. Solomon said this will give, “healing to your flesh and refreshment to your bones.” Genuine wisdom leads to great joy. I pray you get to experience it to the fullest by shunning the foolishness that comes from youthful arrogance.

Related Posts:
“‘You’re Going to Be Broke:’ Some Thoughts on Having Three Daughters”

For Further Reading:
A Proverbs Driven Life by Anthony Selvaggio
Hear, My Son by Daniel Estes 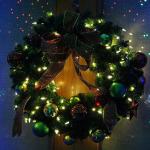 December 23, 2015
How to Make the Most of Christmas
Next Post

January 7, 2016 A Few Good Reads
Recent Comments
1 Comment | Leave a Comment
""Jesus did not come to explain away suffering or to remove it. He came to ..."
Christiane Smith The Lord is Near in Our ..."
"OOMMGG!! I never could figure it out until you said the reasons you liked a ..."
Jaime Lopez Ortega Why I Switched from a Digital ..."
"God also blesses us when we take measures to extricate ourselves from trouble."
Karen Silver How Do I Know that God ..."
"I never heard any of these sermons but I am sure they were shallow and ..."
Kostya2 How to Prepare a Sermon When ..."
Browse Our Archives
get the latest updates from
One Degree to Another
and the Patheos
Evangelical
Channel
POPULAR AT PATHEOS Evangelical
1

Let's Talk about Original Sin--Theologically
Roger E. Olson
Related posts from One Degree to Another