Putting out the Fires of Conflict

Putting out the Fires of Conflict September 30, 2016 Scott Slayton

I love studying and reading about history, but one unfortunate trend I have noticed is that the study of history is really just the study of human conflict. For all of history, people have been striving with each other for power, possessions, and revenge. Lest we think that the “common people” are different than our leaders, we should do a simple look back over the course of our lives and see the damaged and broken relationships we have left in our wake. The story of our lives is all too often the story of conflict and pain.

How do we end the cycle of broken relationships, bitterness, and revenge?

“The beginning of strife is like letting out water, so quit before the quarrel breaks out.”
Proverbs 14:17

When I was in college, I would hear water leaking in a sink and think, “someone will fix that eventually.” Now that I own my home and have grown in maturity, I know that a leak can turn into a flood. If I can catch the leak early, it may cost me very little or nothing at all. Waiting on the leak to resolve itself is a totally different matter because there’s a chance that leak could start pooling up on sheetrock or particle board and then I will have a huge problem.

In the same way, Solomon says must find ways to cut off a conflict before there is a stream of water flowing you cannot control. Cutting off a conflict can take several forms. It may mean walking away from a tense conversation so everyone can calm down or it may mean engaging in a conversation now when you can see festering bitterness that is ready to boil over. Unfortunately there is no hard and fast rule for what you should do, but wisdom dictates looking at a situation and asking, “what can be done to resolve this dispute now so that it does not become worse?”

Resolving disputes in this way means we have to choose something that most of us don’t ordinarily choose. We must decide that our relationship with another person is more important than getting our way or being right. This does not mean sacrificing our consciences so that we walk into sin or sacrificing something we know to be true, but a willingness to die to our desire to get what we want.

“A man of wrath stirs up strife, and one given to anger causes much transgression.”
Proverbs 9:22

Unfortunately we find ways to make strife worse instead of nipping it in the bud. Nothing stirs up strife faster than a red hot temper. Take a small conflict between two people and then have one of them lose their temper, it will inevitably escalate the conflict. Resolution is rarely possible when passionate anger is involved.

Unrestrained anger renders us unable to think clearly in the midst of a conflict and creates in us a laser focus in which we only want to get our way. Anger makes us blind to the thoughts or feelings of other people and leads us to have no consideration for how what we say might effect other people. Anger causes us to refuse to admit we are wrong because we have lost all self-control and have no concern for the damage we are currently causing.

Think about the last time you lost your temper. Were you genuinely concerned about the person standing in front of you when you went off on them? Were you thinking about how the words flowing from your mouth might effect them? Were you pondering the effect your demeanor would have on how those around you viewed the Gospel message or the God whom you claim to represent? I’m assuming the answer is no because this is what anger does. We lose all self-control and consideration for other people, and in doing so we provoke them to anger as well. There is no problem for which an unrestrained temper is the answer.

“Hatred stirs up strife, but love covers all offenses.”
Proverbs 10:12

Our anger, disdain, and selfishness stir up conflicts, but how can we end them? Solomon answers this when he says “love covers all offenses.” When you love the person with whom you are in conflict in changes the way you approach things with them. When you genuinely love another person, you desire to have a right relationship with them more than you ultimately care about being right or getting your pound of flesh for the wrongs you have incurred. When Solomon says love covers all offenses he means that we can overlook others sins and offenses against us because of our love for them.

This is the same word David uses in Psalm 32:1 when he says a person is blessed whose sin has been “covered.” Peter picks up on this in 1 Peter 4:8 when he says, “keep loving one another earnestly, for love covers a multitude of sins.” Peter calls upon his readers to love each other with whole-hearted affection. They can do with without reservation because their love for each other will cause them to forgive a multitude of sins they might commit against each other.

In Proverbs 19:11, Solomon says, “Good sense makes one slow to anger and it is his glory to overlook an offense.” What kind of person just overlooks an offense? Who forgives instead of getting revenge? The Bible’s answer to this question is rooted in the death of Jesus. Because Jesus died in our place to bring us back to God, we no longer have to be slaves to our desire for revenge. Because God forgives our sins, we can forgive others and snuff out our conflicts with them before they ever get started.

One of the important aspects of the Gospel message is reconciliation. We stand at enmity with God because of our sins against him. Yet, God took the initiative and sent his Son to give his life in our place. Jesus died for us as a substitute for our sins, and when we have faith in him he brings us back to God. The old enmity between us and God is erased because our sins have been covered by the death of Christ. We were strangers to God, but he brought us near to him and adopted us into his family through the work of his Son.

How can those who have been reconciled to God live in a constant state of strife with other people instead of working to reconcile with them?

Related Posts:
“How to Tame Your Tongue“

“Should I Correct a Foolish Person or Remain Silent?“

For Further Reading:
Good and Angry by David Powlison 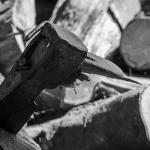 October 3, 2016 Why Hard Work is Worth It
Recent Comments
0 | Leave a Comment
""Jesus did not come to explain away suffering or to remove it. He came to ..."
Christiane Smith The Lord is Near in Our ..."
"OOMMGG!! I never could figure it out until you said the reasons you liked a ..."
Jaime Lopez Ortega Why I Switched from a Digital ..."
"God also blesses us when we take measures to extricate ourselves from trouble."
Karen Silver How Do I Know that God ..."
"I never heard any of these sermons but I am sure they were shallow and ..."
Kostya2 How to Prepare a Sermon When ..."
Browse Our Archives
get the latest updates from
One Degree to Another
and the Patheos
Evangelical
Channel
POPULAR AT PATHEOS Evangelical
1

Let's Talk about Cults--Theologically
Roger E. Olson
Related posts from One Degree to Another