For the past several years, I’ve been reading through Wendell Berry’s Port William novels. Berry, who is a writer and farmer from Kentucky, uses the stories of life in the fictional town of Port William from 1888 through 2008 to show the importance of responsible farming, avoiding debt, and connection to people and a place. Currently comprising eight novels and forty-four short stories, the Port William novels reflect a deep understanding of human nature, relationships, and how we are shaped by the events taking place around us.

I turned to these novels after looking over my reading lists from prior years and seeing that I was reading from a narrow pool of authors and on a narrow list of topics. Reading about life in a fictional Kentucky town initially felt like a detour from theological reading, but in these books I encountered profound truths about God, life, and community. (So far, I have read Jayber Crow, Hannah Coulter, Nathan Coulter, The Memory of Old Jack, Andy Catlett, Remembering, and some of the short stories from That Distant Land.)

There are two themes from the Port William novels that particularly speak to issues that Christians face in our current culture.

Know the People Around You

The characters in Port William know each other and know each other’s stories. Sometimes this takes the form of town gossip, but more often than not it exists because the people genuinely know and care about each other. They speak of each other’s families, burdens, and businesses. This knowledge generates a community of mutual respect and concern as well as helping each other see potential areas where they can trip up. For example, Jayber Crow watches with horror as Troy Chatham mishandles his father-in-law’s farm and life’s work. Nathan and Hannah Coulter spot the deficiencies in their daughter’s marriage from a distance before disaster strikes in the form of her husband’s infidelity.

Berry’s emphasis on knowing our neighbors and belonging to a community echoes the concerns of the New Testament writers. Christians can make a durable difference in this world by knowing the people in their community, hearing their stories, and making themselves available to help. Unfortunately, we have erected barriers that keep us away from this kind of community. We either pack our schedules so full that we have no margin to be around people or we barricade ourselves in our homes and drone away in front of the television. In addition, we possess a tendency to bring a consumer mentality to our communities instead of an investment mentality.

The New Testament doesn’t leave Christians with this option. The first-century church was a family. They shared meals from house to house and gathered each day to fellowship and learn. Their love for each other told the world they were Jesus’ disciples and they lived their lives in such a way that people were asking what the reason was for the hope that was within them. They learned this from Jesus who said the greatest commandment was to love God and the second was to love our neighbors as ourselves. We struggle to obey this command, though, because it is difficult to love people that you don’t see often.

Listen to the Wisdom of the Ages

For several generations, Americans have acted as if they believed their forefathers were morons. We possess an uncanny ability to see their failures, and so we reject their wisdom on all manner of issues. Berry captures the foolishness of this ethos well. It is especially personified through the character of Troy Chatham in Jayber Crow. Jayber spots Troy Chatham from a distance when he is a star high school athlete and watches him into adulthood. Troy was a showoff from his earliest years and his confidence in his own abilities never fades. He inherited the land of his father-in-law, Athey Keith, when he marries Mattie, the apple of Jayber’s eye. Mr. Keith faithfully took care of the land entrusted to him and never demanded more of the land than it was prepared to give. He knew how to listen to his land and conserved its beauty. The farm ran debt-free and was poised to provide for the family for another generation.

Troy had other plans for the Keith family farm. He saw himself not as a humble farmer, but as an agribusinessman. He ran roughshod over the land by farming it without any regard to what he was doing to the health of the soil. Beautifully wooded areas logged to pay for Troy’s expanding empire. This rough treatment of the land produced little actual wealth for the family because Troy took on massive amounts of debt to finance his dreams.

In Remembering Andy Catlett speaks at an agricultural symposium. At the time, he is known for his ideas that run contrary to those of almost every other person in the room. He spoke passionately about “the occult of science,” where everyone makes decisions based off of statistics and numbers, but forget the impact that their decisions have on real people. While most of the people who listened to his talk looked skeptically on the ways of the past, but he looked back and saw the people whose lives were wrecked by the foolish decisions made in rooms like the one where he was speaking.

On a related note, the Port William novels warn us about the unthinking adaptation of technology for technology’s sake. Many times, we use this technology thinking it has made us more connected to other people when in reality it has had the opposite effect. We tend to stay connected to people who are distant from us while not making the time for the people who are the closest to us. It sounds like talk from a bygone era, but what if we learned to slow down and increase the margin of time we had for other people? What if our homes were not fortresses and our dinner tables knew the sound of friendship and laughter? Would followers of Jesus not make a greater impact if we learned more of how to listen, celebrate, and mourn with our friends and neighbors?

When Berry looks illustrates the foolishness of the young in rejecting the ways of their fathers, he echoes the words of King Solomon in Proverbs. Our generation increasingly speaks as if we are the brightest generation to grace the landscape of American history, yet many metrics suggest our fathers knew many things that we do not. We see the blind spots and sins of the generations behind us and assume this means they were wrong about many other issues too. Nothing could be further from the truth. Did our forefathers blow it on many fronts, especially those related to race? Yes, they erred in terrible ways. However, does this mean they were also wrong about the foolishness of debt, the value of hard work, or the importance of community? Absolutely not.

If we see the error the people who came before us that they could not see about themselves, does this not suggest those who come after us will see errors in us that we cannot see? The writers of Scripture warned about being wise in our own eyes. They saw the danger in having an elevated view of ourselves because trusting in our own wisdom will cause us to reject the wisdom of our elders. What if instead of constantly critiquing the lives of our grandparents’ generation, we let them critique us? Would we find areas where we want to go in the opposite direction of their example? Of course, but if we stopped and listened to them, we would benefit from them in more ways than we can imagine.

Related Posts:
“Why We Struggle to Pray in the Digital Age“

“Why I Need My Friends to Judge Me“ 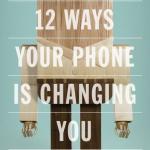 September 14, 2017
The Best Quotes from 12 Ways Your Phone is Changing You
Next Post

September 25, 2017 Cultivating a Deep Walk with the Lord
Recent Comments
0 | Leave a Comment
Browse Our Archives
get the latest from
One Degree to Another
Sign up for our newsletter
POPULAR AT PATHEOS Evangelical
1

Why Aren't the Other Slavers Getting...
Cranach
Related posts from One Degree to Another

Demons!-- Part Thirty Five
BEN: Helpful are the following sentences: “The kingdom of darkness will lose...
view all Evangelical blogs
What Are Your Thoughts?leave a comment
Copyright 2008-2020, Patheos. All rights reserved.