Before You Get Angry about a News Story 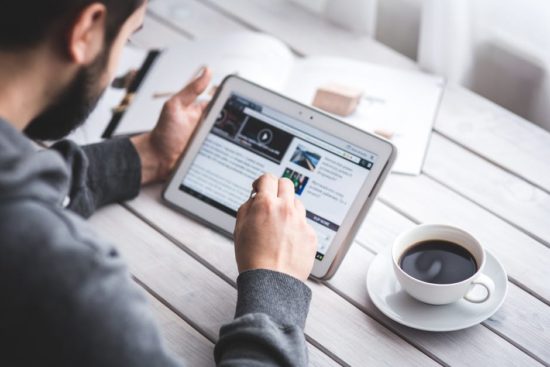 I don’t remember the last time I went through a day without reading about a call for someone to apologize, get kicked off the team, suspended from school, or fired from their job. We have become a culture addicted to outrage. We hear about something that someone said or did, get angry, become completely engrossed in following the story, and look forward to seeing them get their just desserts.

This is not the exclusive property of the right or the left in America. Both are guilty. Recently, ESPN anchor Jamelle Hill tweeted that she believes President Trump is a white supremacist. The calls for ESPN to suspend or fire her began immediately. (ESPN suspended her for remarks she made about Cowboys owner Jerry Jones. Like I said, these things happen often and fast.) Within a short amount of time, people were sharing social media posts showing the difference in how ESPN handles controversial statements from conservatives versus how they deal with those made by their liberal employees. Many conservatives were furious that she was not fired, even ones who never watch the ESPN show that she anchors.

In another recent event, a photo circulated from a high school pep rally in south Alabama. One student held up a sign with an extremely offensive racial comment and another held a Donald Trump banner.  Media outlets all over the country picked up the story and within a few days, cries came from around the country for administrators to deal with this “hate crime.”

We love outrage and social media provides an abundance of fuel for the fire. We read a headline that makes us angry, learn just enough about the situation to sound like we know what we are talking about, and fire off angry posts about an issue we didn’t know about until a few minutes before. Then, we spend the next three days reading the people who reacted to the reaction and react to what they said. We stay on this outrage until another comes along. Rinse and repeat.

How do we get off the perpetual outrage machine? I would like to suggest six questions to ask yourself before you get angry about a social media post.

When is the last time I got angry about a news story?

This broken world is filled with injustice and many things happen that should provoke us to action. Unfortunately, the internet shoves them in our face on an endless loop. If you are currently angry about something that you saw on the Internet and you want the person to pay for what he has done, ask yourself how long it has been since you felt this way. If the answer was sometime in the last couple of days, you need to check your own heart.

Sometimes, our desire to be outraged about something that someone else did has its origins in self-righteousness. In our thirst to prove ourselves righteous, we must find someone who is doing, saying, or thinking something horrific and devote our energies to seeing them receive their comeuppance. When they receive their shame and punishment, we dance around with the internet mob displaying the head we’ve claimed.

My perpetually outraged friends, look to Jesus. The greatest outrage in the world is not a flag protest or the latest ridiculous thing the President tweeted, it is your own sin. If you want something to be angry about, look at the depth and breadth of your sin against the Father who loves you. Your provocations against him call for a shame and retribution that would make an internet mob look like a toddler’s tea party. But God, because of his rich mercy, sent his Son who willingly took your place and bore the justice of God on your behalf. The righteousness you long for is not found in seeing a wrong righted, but in the perfect righteousness of Christ which is yours through faith in him alone.

Should I be upset about this?

Sometimes we get angry about things when we don’t have our facts straight first. We face an endless barrage of out of context news stories and hear the rantings of many who have become enraged without understanding the situation they’re angry about.

Think about the recent NFL flag protests. If this has angered you, have you taken time to read about why players are kneeling in the first place? Colin Kaepernick sat during the national anthem of a preseason game last year to protest police brutality against black men in America. Then he met with former Green Beret and NFL player Nate Boyer. Boyer explained to Kaepernick that he could make his voice heard about injustice and still show respect to our nation’s military by kneeling for the anthem instead of sitting for it. Boyer even stood on the field next to Kaepernick while he knelt for the anthem before a game. Everyone is upset about players kneeling, all the while their kneeling was a way to respect the flag and veterans while also registering their concern about injustices black Americans face. Maybe if we had our facts straight, and weren’t so inflamed by Fox News and the President, we would have realized what the kneeling is and is not about. You don’t have to agree, but at least understand the issue before you start grandstanding on social media about how you are boycotting the NFL.

What is my proximity to this situation?

Let’s say the issue you stumbled across should make you angry. It is a grave injustice and it should not stand. Now you need to ask if you are close enough to the situation to do something about it.

Before you fire off about an issue online, ask if you are close enough to effect change for the better. Take the example of the offensive sign in south Alabama. If you live in that county, you can talk to your school board representative and speak with people who live in the town about it. If you live 500 miles away, maybe you don’t want to be part of an online mob who are jumping on a teenage girl. Proximity matters.

I ask the physical proximity question because you need to realize how often our culture confuses posting about something on social media with actually doing something. If a teacher in Georgia gives kids a quiz on various sexual identities, will your angry Facebook post in Oregon accomplish anything? I doubt it, but the person who lives in the school district and calls their board member can.

Am I treating others like they bear God’s image?

One of the great dangers of social media is that we do not treat people as if they are real people made in the image of God. People are a profile picture, a name, or the embodiment of something that we despise. For those who follow Jesus, we cannot look at people this way. There are too many Gospel issues at stake.

Christians face the temptation to stop acting like the Bible is true because politics is involved. We think that if someone is “hurting America,” we can distort the truth, speak unkindly, and exact revenge. If you are a Christian, this identity determines everything about how you approach public life. This is especially true of how you speak about other people. The image of God in them and the presence of the Holy Spirit in you demands that you speak about them in kindness and love. This is not weakness; it’s the distinguishing mark of God’s people. “With it (the tongue) we bless our Lord and Father and with it we curse people who are made in the likeness of God. From the same mouth come blessing and cursing. My brothers, these things out not to be so.” (James 3:9-10)

Do I need to take a break from the Internet?

Today I read an article about the guy who invented the Facebook “like” button. He talked about how the purpose of that button was to increase user engagement so people had more reasons to come back to the app. Like Pavlov’s dog, we have been conditioned to check our phones and get a dopamine hit when we have a notification, see something interesting, or read about something that makes our blood boil.

If you find yourself addicted to the internet in general, or to internet outrage in particular, maybe you need to take a break. (Yes, internet addiction is real.) Delete the apps on your phone, have a friend change your passwords, or get an app like Freedom that can block certain websites for a set period of time. The break will be hard, but you will find that you are happier, have a deeper walk with the Lord, spend more time with people, and get less angry at the world.

When is the last time I read the Bible?

At the risk of sounding sanctimonious, we spend infinitely more time on social media than we do reading and meditating on God’s word. When we are in line at the store, we aren’t popping open our Bible apps to read a chapter. No, we hop on Facebook or Twitter to see what is going on. The result is that we end up soaking in the world’s trivialities and controversies. They roll around in our minds and are what we think about in the quiet moments.

For the Christian, comparing the amount of time we spend on social media versus the amount of time we spend in the Scriptures would be a helpful exercise. There are a couple of ways that you can do this. If you have an iPhone, look in the settings at your battery usage. It will tell you what apps you spend the most time on. I recently put an app on my phone that tells me how much time I spend on my phone each day and how many times I opened it. The numbers were startling.

What would happen if you started taking five minutes to read the Bible instead of browsing your social media feeds? Next week, bump it to ten and then fifteen minutes the week after. Eventually, you will find yourself basking in the beauties of God’s word more than you wallow in the muck of the world’s garbage. The result is that you will see yourself transformed into the image of Christ through the renewing of our minds. God will receive more glory in your life, you will be more fruitful in your interactions with others, and you will be filled with more joy.

Related Posts:
“7 Questions to Ask Before Posting About Politics on Social Media“

“The Blessing of Selective Ignorance“

For Further Reading:
12 Ways Your Phone is Changing You by Tony Reinke

October 12, 2017 The Best Quotes from The Tech-Wise Family
Recent Comments
0 | Leave a Comment
Browse Our Archives
Related posts from One Degree to Another